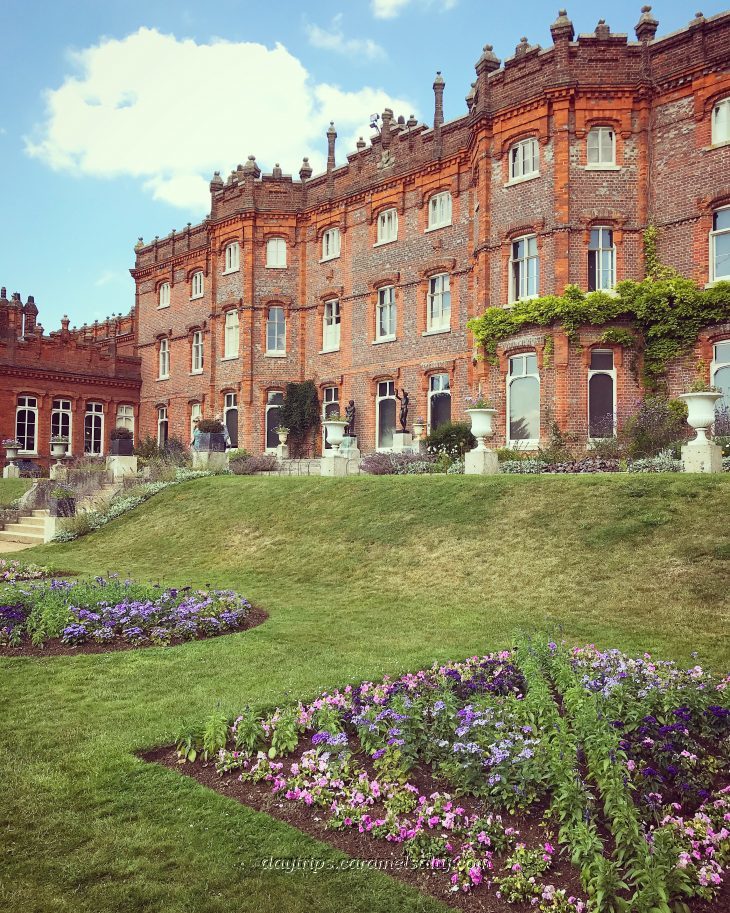 Primrose Day is the anniversary of the death of Benjamin “Dizzy” Disraeli. It goes by unnoticed these days. But his house and gardens, which sit in the gorgeous Chiltern Valley, is open to the public. Even Queen Victoria visited. But that’s not surprising, for she had a soft spot for Britain’s first, and only, Jewish Prime Minister.

The entrance to [1] Hughenden Manor is literally next to the bus stop. It’s a steep climb, but one I hardly notice as I’m too enthralled with the rather splendid trees in the landscaped parkland through which the drive passes through.

About halfway up is [2] St. Michael and All Angels, the parish church of Hughenden. A church has stood in this spot since the 12th century. When Disraeli buys Hughenden Manor in 1848, he restores this church and the manor at the same time.

Disraeli loved being at Hughenden Manor. And he loved the trees in its grounds. He said that every time he returned to Hughenden, he spent the first week sauntering about the park, and the second, reading his books.

Having picked up a walk booklet from the visitor’s welcome tent, I decide to start with the Purple Route. It’s also known as the German Forest Walk, which the Disraelis planted to remind them of the Black Forest which had enchanted them so much when they visited.

Point 2 along the Purple Route is a jaw dropping, sharp intake of breath type of view. Through a gap in the trees is a dale called Echo Valley for good reason. And flying high above my head are a dozen or so majestic kites, whose population have been boosted by local conservation projects.

The woods here are known as Hanging Wood. But it’s not always dark evergreen that hangs over me. Lime and ash trees provide splashes of vibrant green amongst the pines.

Pine woods are generally dark and gloomy, but not so on a hot summer’s day. Only the occasional rustle of a blackbird or squirrel in the undergrowth disrupts the silence as I wander under its shady green umbrella.

The Red Route climbs a hill. Then down the other side, until it reaches another bridle path. And then up another hill. This must be my third hill in under two hours. But all totally worth it, as I soon find out.

The Red Route is actually a boundary walk which is accessible freely by the public. It is through this ungated footpath that I emerge into the rather charming town of [3] Downley.

After a short walk along [4] Littleworth Road, I plunge back into the shade of Tinker’s Wood. Another climb, (I’ve lost count, is this the fourth?) and I tumble out again into bright sunshine on top of Tinker’s Hill, where I find the 50-foot [5] Disraeli Monument.

Needless to say, the views from this summit are absolutely stunning.  And there’s even a bench to take it all in.

The path goes back down the valley, running alongside pastureland. I can now pin down the source of that subtle aroma of freshly laid manure as I was wandering through Tinker’s Wood just now.

I switch from the Red Route to the Orange Route to return to Hughenden Manor. I wander through a poppy strewn path that divides pastures from farmland. At a stile, I cross [6] Coates Road again.

A final left turn on the Orange Route, and I’m on the home run to Disraeli’s home. It’s along this path that I find, in a little clearing overlooking English meadows, a cemetery for man’s best friend.

The gardens at Hughenden are actually down to Mary Anne Disraeli. They say she even worked on it under torch light. Hughenden Manor is her refuge from the dirty world of politics, the constant scrutiny of her marriage to Dizzy and criticism of her sometimes uninhibited remarks.

When Disraeli met Mary he was heavily in debt from trying to vie with the landed gentry he so wanted to be part of. She was a wealthy widow, 12 years older than him. She did confide that Dizzy may have married her for her money, but given the chance again, that he would have married her for love.

An audio-visual exhibition inside tells of the time when Hughenden Manor was sequestered for the war effort. Men and women secretly worked here to produce as accurate as possible maps for the Allies’ bombing raids. Original maps with handwritten notes by the pilot brings a personal touch to the display.

Back I go outside, as there’s still plenty of garden to explore. Just by the stable yards café is the walled garden. It’s an orchard of apple trees and at least one cherry tree. An oversized patch doll watches me as I pick up a fallen apple to store in the baskets provided.

Last but not least, I tackle the Blue Route. It may be the shortest, but it still packs a punch, starting with the very enchanting [7] Woodcock Wood. In spring, these woods are awash with bluebells.

I come across a saw pit, a common feature when these woods were being logged. When the trail leads me out of the woods, I find myself in an open field with yet another view of the stunning Chilterns. A moving figure in the distance turns out to be a muntjac deer, often seen in this area.

To end on a cheerful note, I finish up on Coffin Lane. It’s an ancient path that the villagers of Naphill who, bereft of a parish church of their own, used to carry their dead to St Michaels and All Angels. And this is the very route I now take back to the bus stop.

As I walk downhill past the church, I can’t quite believe that I’ve just visited the house of a scholar, writer of fiction, three times Chancellor and twice Prime Minister of Britain, only to end up gushing about his gardens. But as others have written lots about him, I think I will simply end, as I began, about his end.

Disraeli dies on the 19th April 1881, leaving an already mourning Queen Victoria, even more distressed. He had been a close friend to this lonely widow. Unable to attend his funeral because of protocol, she sends instead his favourite flower…… a wreath of primroses.