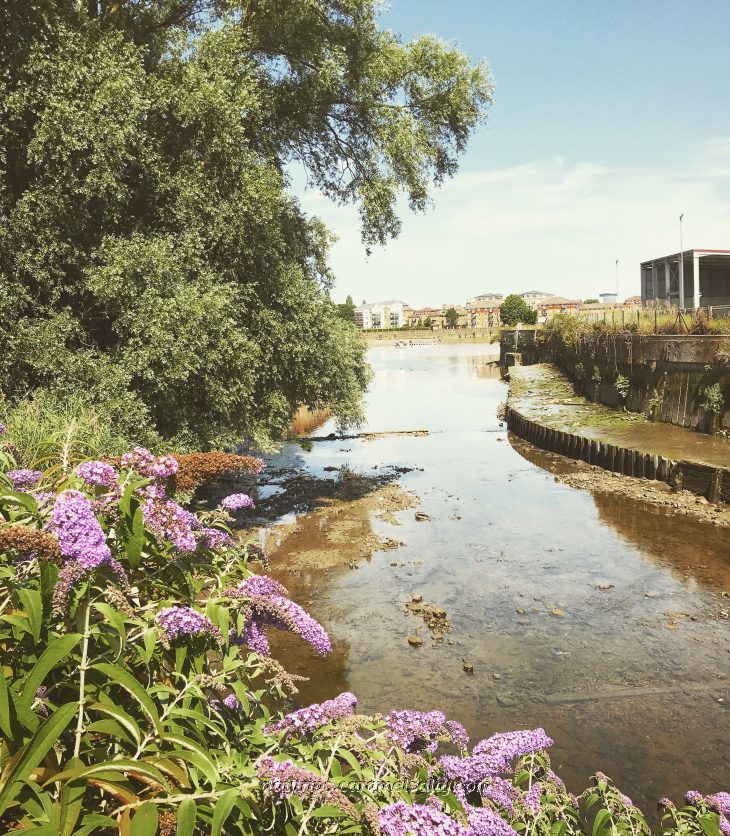 The fast flowing river Wandle was once the hardest working river in Europe, turning over 100 mills from Carshalton to London. Huguenot refugees fleeing 17th century France, found this rich chalkstream ideal for their traditional industries of weaving and dyeing. But when the industrial revolution arrived in the 19th century, this hardworking river became a very polluted waterway.

I begin at [1] Wandle Creek Bridge (1999) overlooking the Wandle Delta. Most tributaries to the Thames seem to join it in an unremarkable fashion, usually flowing over a grimy sluice and skirting around the inevitable pile of urban trash. But the Wandle delta proves to be quite different.

The Wandle splits into [2] Bell Lane Creek and the [3] River Wandle at this point. In between them is [4] The Spit, a nature reserve. The river wall here has been lowered, which allows high tide to flood the wetland terraces, enabling nature to dictate what grows here.

Speaking of tides, just along [5] The Causeway is a bell on another sluice gate inscribed with “’I AM RUNG BY THE TIDES”. Immediately above are the words ‘Salmon, Swan, Otter, Heron, Eel’. These words are testament to the wildlife that has returned to a river once contaminated by industrial waste.

It is hard to not notice the pace of construction around the Wandle. The Thames super sewer is being built beneath me. And rising above me are blocks of high rise flats. It’s actually rather surprising that there isn’t more rubble in the river.

In days gone by, shire horses used to deliver barrels of beer from the local Ram Brewery to a few local pubs, just to keep a tradition going. But it all ends in 2006 when, after 450 years of brewing along the Wandle, the Ram Brewery moved out of London.

The brewery is now a smart residential and commercial complex called the [7] Ram Quarter. It preserves some of its brewing legacy with a microbrewery on site, whilst the river Wandle gurgles along [8] Barley Walk to the west of the development.

Unlike the rivers of north London, the Wandle hasn’t been forced underground. But I speak too soon. The [9] Southside Shopping Centre has, regretfully, been built over the river Wandle. Back in the 70s though, this was considered an incredible engineering feat.

The river emerges again in [10] King George’s Park. But as I walk through this mile-long sport and recreational park, the river is disappointingly out of reach behind black iron rails set a couple of feet from the high riverbank. It’s not until I get to [11] Foster’s Way, that I’m finally walking along a path between riverside flats and a non-fenced off river.

The river path spills me out onto the candy coloured [12]Strathville Road. This is [13] Earlsfield where, bizarrely, no one thought it a good idea to preserve a riverside path. And things get even more bizzare when I come face to face with a Viking as I cross over the Wandle into Earlsfield, along [14] Penwith Road.

On [15] Garratt Lane which runs from Wandsworth High Street to Tooting, I find Earlsfield’s high street. A brick pub is charmingly wedged under the arches of the train station, whilst other more conventional eateries are littered about. It’s a perfect spot for a quick pit stop.

I rediscover the river Wandle at the bottom of [16] Trewint Street by following the sound of the river rushing over a weir under a bridge. The bridge leads to a narrow piece of green along an industrial estate of some kind. On the other side, the sound of an incessant drill at a scrap yard ricochets off factories and warehouses.

Despite this industrial scene, along the river path on my side are wild blackberries ready for the picking. I spot a a heron gracefully flying past. And pat the noses of a couple of friendly horses through a fence.

I cross [17] Plough Lane, previously home to a Greyhound Stadium and AFC Wimbledon, to walk along the river again. The Wandle meets the [18] Graveney along here, where a wonderful wooden walkway takes me right over the confluence.

Next is [19] Wandle Meadow Nature Park. A park bench sits incongruosly under a giant pylon looking over scrubland. This is because this previous brickworks and sewage works, is gradually being returned to nature. At the other end of the park, a wooden walkway leads me to [20] Bewley Street. From [21] Byegrove Road I wander into the lush [22] Wandle Park.

The Wandle was diverted into [22] Wandle Park (more about the park here) to create a pond and mill-chases. John Perry lived in Wandlebank House, which once stood in this park. He owned the corn mill too, one of many owners of Victorian factories and distilleries that popped up along the river and spewed their waste into the Wandle.

At [23] Merton High Street, the Wandle flows down the side of another retail park. This is where William Morris built his printworks. Given its history of textile industries, it’s no wonder the Wandle turned a different colour each day, depending on what dye was being used that day.

Just as the Tidebell at the start of my walk alluded to, the Wandle is now filled with fish, water fowl and aquatic life. And it’s just not aquatic life that lived along the Wandle. It would appear a monastic one did too, the clue being in the address of Morris’ printworks – Merton Abbey Mills.

Having escaped being culverted (i.e. put in a big drain) to prevent the spread of typhoid and cholera in London, my wanderings along the end of the Wandle’s 9 mile journey to the Thames, has been varied and, surprisingly, green. And beyond [24] Colliers Wood, where this blog ends, the Wandle Valley looks promisingly greener.