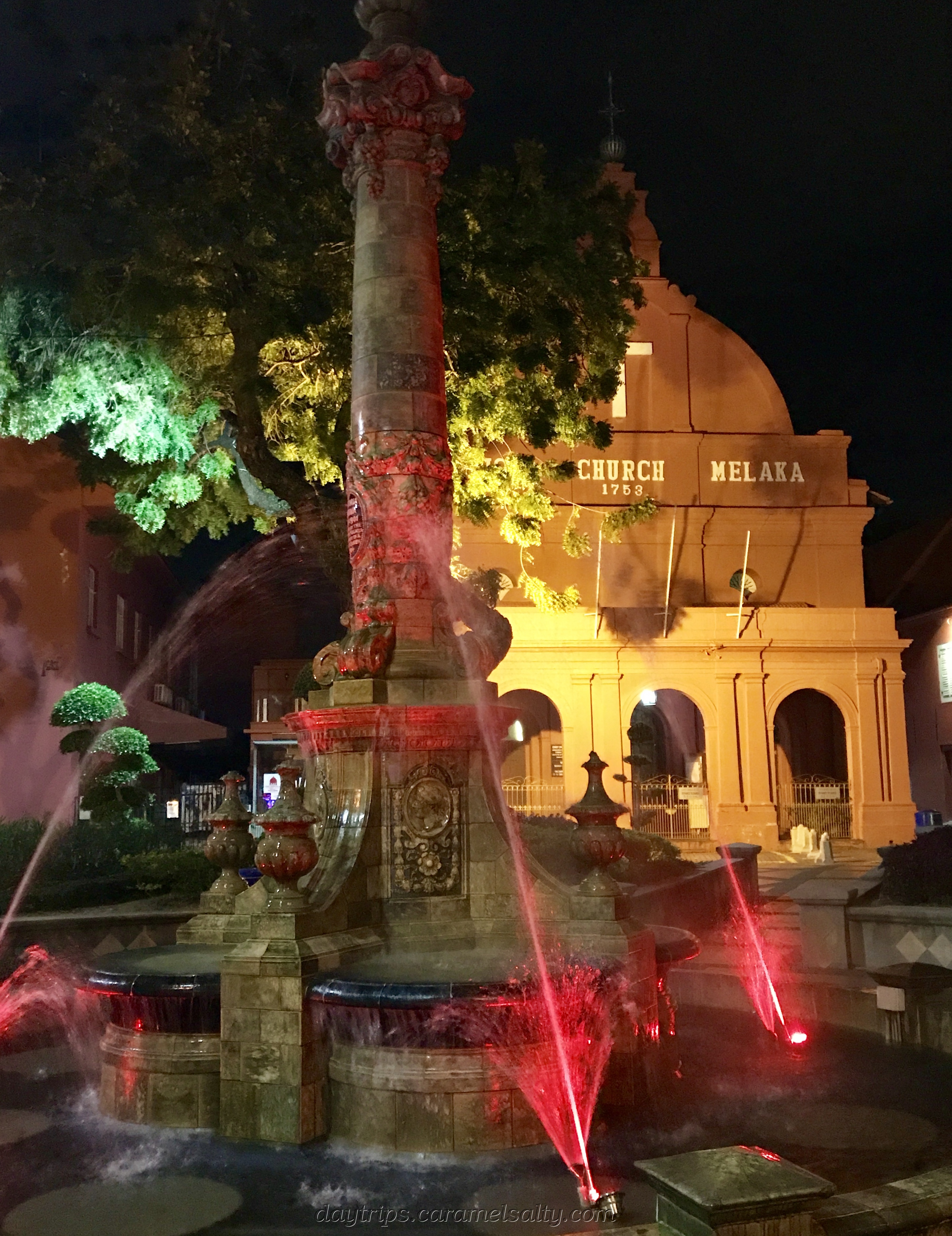 My history lesson in Melaka thus far, got to when the British took charge of Melaka with the signing of the 1824 Dutch Anglo treaty. So today I’m going to discover what happened next. But first things first. At the [1] Stolen Cup, I have a to-die-for latte with gula Melaka (palm sugar) and a gooey salted egg yolk croissant. A western breakfast, but with a Melakan twist. Quite appropriate, given my theme today.

A short walk down the lane between [2] Christ Church and the [3] Stadthuys building, is the small [4] Dutch Graveyard, with more British than Dutch graves today. The grave of the two British soldiers with the tall column relates to the Naning Wars (1831-1832).  Only 7 years into their formal rule, this is an embarrassing and costly defeat for the British. They abandon further military style expansion in Malaya, in favour of political persuasion. But it’s only 50 years later, as I learn in Taiping (Taiping blog link), that the British gain their next territory in Malaysia with the signing of the Pangkor Treaty (1874).

Next, I’m going to explore the museums around the base of Melaka Hill. The quickest way to them is over the top of [5] Melaka Hill. A paved, but shady set of steps to the right of the cemetery takes me past earlier British graves further up the hill. At St. Paul’s church I take the stairs down to Porta de Santiago.

Across the road from Porta de Santiago is the golden domed [6] Proclamation of Independence Memorial. This elegant colonial mansion was previously the Malacca club (1912), the social centre of British colonial Malacca. It has seen many famous visitors, including the novelist Somerset Maugham. Today, the building narrates Malaysia’s journey to independence from the British in 1957.

The next museum I visit is the [7] Stamp Museum, confusingly tagged as the Kite Museum on Googlemap. I realise that a stamp musuem may not be everybody’s cup of tea, but as a half hearted philatelist, I wander in. I am somewhat disappointed by the dim lighting and random collection downstairs. However it’s a different story altogether upstairs.

It’s the British who introduce stamps in Malaysia. The chronological order of the stamp displays succeed in providing a beautiful pictorial narrative of the political history of the states of Malaysia under British rule. I learn about the Straits Settlements (1824), the Federated Malay states (1895) administered by British Residents, the brief Japanese occupation of Malaya (1942-1945), the printed but never issued stamps of the heavily opposed, and therefore, short lived Malay Union (1946 -1948), and finally an independent Malaysia (1957).

However on a less historical note, the museum is said to be haunted by a friendly ghost. And there is a rare collector’s item on display, the Pahang bisects. An ingenuous British officer in Kuala Lipis,facing a shortage of 2p and 3p stamps, diagonally cuts his supply of 5p stamps in proportion to the postage required. In true philatelist style, there is a two part, 8 page pdf document of this incident. And that’s probably why I shall always remain a closet philatelist.

The [8] Melaka Islamic Museum round the corner, whilst nothing to do with British history, is in an attractive stone and timber decorated building. Amongst the things I learn is about the Battle of Karbala, a significant incident in Islamic history, which divided the Muslim community into Shias and Sunnis as a result.

Next door, is the [9] Malaysia Architecture Museum. It’s one of those, “could do better” museums. So it’s with trepidation that I enter my last museum of the day, the [10] Museum of Royal Malaysian Customs, built by the British to collect taxes. The initial dry content soon gives way to an entertaining section on confiscated items. From the downright serious matter of preventing illegal trade of animals, the items on display take on an entertaining twist of excise duty evasion and the subjective matter of what is considered to be lewd and immoral.

Right next to the Customs Museum is a [11] replica of the Flor de la Mar, a Portugese ship. I know it’s definitely a replica because the real one, loaded to the brim after the sacking of Melaka by Afonso d’Albuquerque, sank off the coast of Sumatra. Its treasures have never been found. So perhaps the sometimes grimey Straits of Melaka may after all, have a bit of shine to it. Next door to the replica is the [12] Maritime Museum.

The [13] Melaka River, which flows into the Straits of Melaka, was once dubbed the ‘Venice of the East’ by European seafarers. It used to be a picturesque scene of fishing boats berthed along the riverbanks here, but it’s now mostly rows of restaurants.

I board the 45-minute [14] River Cruise, from just behind the Flor de la Mar. The cruise takes me all the way to Kampong Morten, past Melaka town and under some pretty bridges. The first bridge is the Tan Boon Seng Bridge which the Portugese seized to cut off the Sultan’s palace on the hill. The now concrete  Chan Boon Cheng Bridge was used by the Japanese to display beheadings.

I enjoy the massive and bold-coloured street art along the river by the Melaka River Street Art Project, most of which are along Jalan Kampung Hulu, right outside Jonker Street. I will be exploring these streets tomorrow. So this is a great, and lazy way of being introduced to them.

I return back to the river cruise jetty and make my way along to one of the bars I had seen along the river. This is my last day here. I’ve had a great time sampling wonderful Melakan cuisine and wandering the streets. But it’s the history lessons of the last few days that have been remarkable. Unlike my school days of simply regurgitating dates and events, I’ve now got a better understanding of who, the why and the how of the events that unfolded in this area.

You May Need To Know That ….