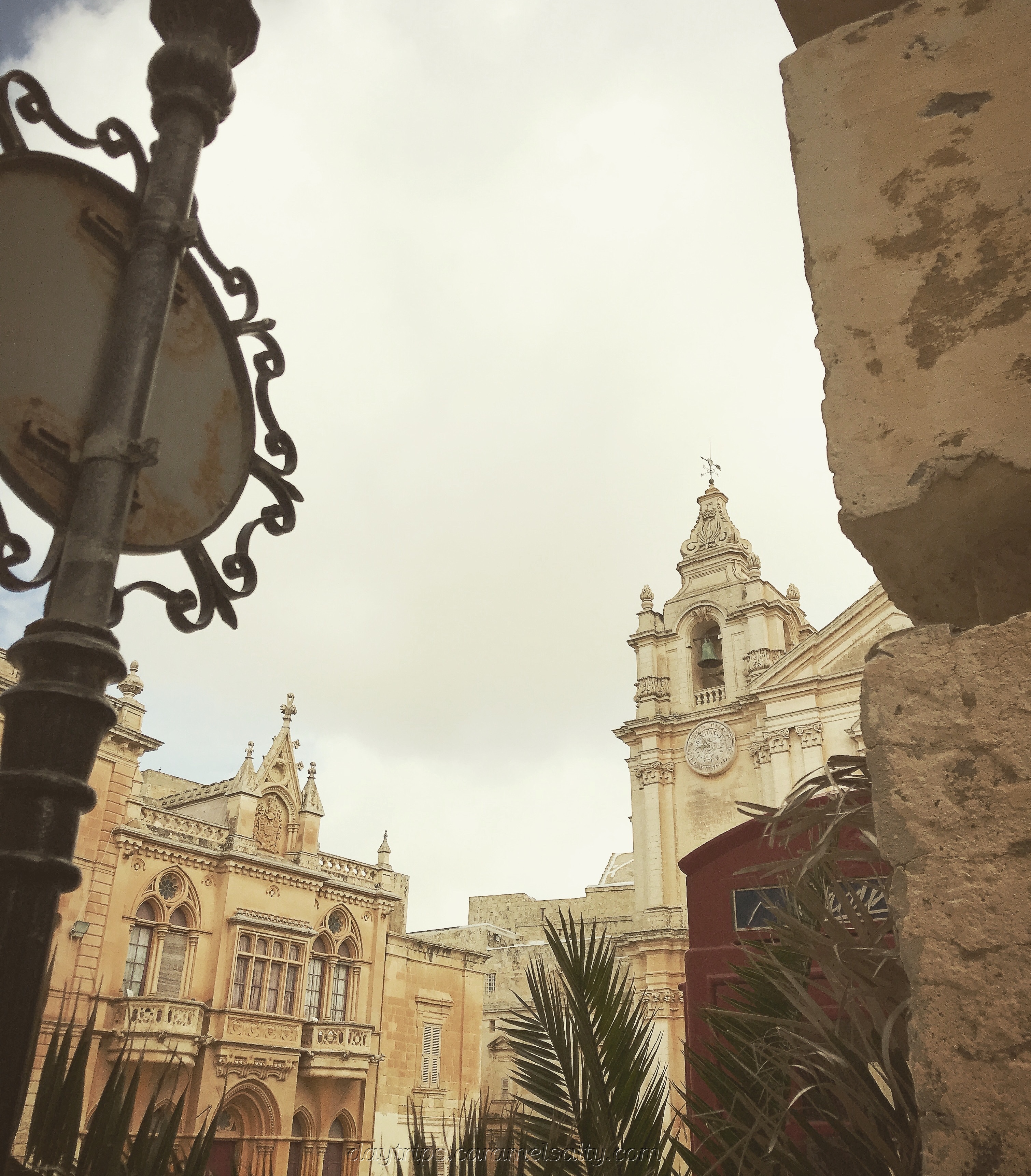 Mdina, a city from antiquity, is far, far older than Valetta. Records show that the Phoenicians, from 7000 years ago, called it Maleth. So Maleth, here I come.

Mdina is close to Valetta, as evidenced by the emergence out of the rush hour traffic into Valetta, only to then join the one into Mdina. Which makes me all the more grateful for some rural views as the bus crawls along the flat terrain between Valetta and Mdina.

Had I just said a flat terrain ? Well, I’m going to have to eat my words. Once past Qanpiene bus stop, I catch sight of farm terraces on slopes as the bus climbs up to a yellow city perched at the top of a rocky hill.

On alighting the bus at Rabat terminus, I enter the city via the Baroque style [1] Mdina Gate (1724). It’s also known as the Vilhena Gate, a clue to the Grand Master of the Knights of St John in charge at the time of its construction. It seems that Vilhena built quite a few things, incuding the fort on Manoel Island, my walk of a few days ago.

It’s the Romans, who, after invading Malta in the Punic Wars (263 – 146 BC), build the first walled city, calling it Melita. However the now dry moat and the thick walls that I walk under, are the legacy of the Normans (1091 AD).

As I’m too early for museums and such, I take pleasure in wandering around the narrow cobbled streets and pretty squares. Mdina is free from motorised traffic, and, at this time of day, also free from tourists, deserving its nickname as  “The Silent City”

For its size, Mdina certainly packs a punch. The first wow factor is Pjazza St. Pawl. Every road in this walled city leads to this magnificent square, with the red and white domes of the cathedral towering above it. So it’s a little disappointing that it also doubles up as a car park for the Silent City.

The cathedral is open for morning mass. I slip in. During my short visit before mass starts, I’m overwhelmed by the floor which is covered head to toe in beautiful inlaid tombstones of the Knights. Whilst tombs like these are in every cathedral in Malta, with only St John’s in Valetta surpassing the scale of it here, unlike St. John’s, there isn’t a protective carpet covering most of it.

The cathedral, rebuilt after the 1693 Sicilian earthquake, was originally built in honour of St Paul. By all accounts, the shipwrecked St Paul had a  hectic 3 month staycation on this island. He’s bitten by a snake but survives. He cures the father of Publius, the Roman Governor of Mdina. He then converts the convinced Publius and the entire population of Malta to Christianity.

When the clock strikes musuem opening time, I’m at Palazzo Falson (1495), an aristocratic mansion. An audio guide leads me round the fine collection in the splendid rooms and quaint atrium. Despite Mdina’s decay starting when it loses its capital status in 1571, many Maltese nobility continue to live in this city, which is still referred to as Citta’ Vecchia (the old city) and Cita’ Notabile (the noble city).

Needing to prove that I’m indeed on top of a hill, I seek out the panoramic views that must accompany a location like this. I find it along the city walls flanking Triq-is Sur and the pleasant Bastion Square. I spend some time up here, buffeted by that persistent Maltese breeze, taking in the lush valley below.

Back in town, I decide to breakfast in the Carmelite Priory cafe, as I am a sucker for any place that can unashamedly boast about something. This time it’s the lack of wifi. Breakfast is nothing to shout about. But the wonderfully painted ceiling is. Surely they should be boasting about this instead.

Having such a charming cafe, I brace myself for more grandeur at the Carmelite Priory next door. I don’t think I could’ve prepared myself sufficiently. The turquoise blue roof is stunning, belying the plain exterior of the priory. As is often the case, I find.

I return to buy a ticket for the Cathedral. The entrance fee is worth every single Euro cent. This time I wander right up to the altar to stare in awe at the dome depicting the shipwreck of St Paul. As well as discovering the many other highlights listed here.

The Cathedral ticket is also valid for the Cathedral Museum. Having visited numerous church Treasuries in my lifetime, I’m not expecting to be bowled over. However for a small museum, I credit it with some beautiful and interesting objects.

But what is outstanding is the art gallery upstairs. Often I’ve wandered through corridors of religious art, hoping someone has accidentally hung a painted sunflower for a little respite from the subject matter to hand. This gallery, however, has wonderful paintings of saints, such as St. Sebastian and St Agatha, who I learn more about in Rabat.

St Jerome is depicted here in Caravaggio’s style – thin arms over the “Book” and a skull symbolising immortality. I’m compelled to learn more about this man. He’s responsible for the Bible we know today, having translated it from original scripts written in Hebrew, ancient and modern Greek to Latin. What a huge task !! It’s called the Vulgate, a word that apparently should be in every good Christian’s vocabulary. As for me, the next time I visit a library, I will think of St Jerome, the patron saint of libraries and librarians.

Across the road from the Tourist Office is the Palazzo Vilhena, which hosts the Museum of Natural History of Malta. Its many informative geography and wildlife displays also include the largest squid ever to be caught in Malta. But the perturbing display of the day are the stuffed birds, from natural deaths. Many of them are marked as endangered species. I wonder if this is down to the sport of shooting migratory birds on this island.

Last but not least, are the Mdina Dungeons, next to Palazzo Vilhena. Once I get over the non convincing sound effects on a continous loop, I read about the 1749 Slave Conspiracy. What Wikipedia doesn’t tell you, but the museum does, is the torture meted out to the arrested slaves. Needless to say, the key conspirators are eventually executed.

I wander, for the last time, through one of the finest examples of an ancient walled city. After all that blood and gore, I could do with a more cheerful subject matter. Without too much trouble, I find a final piece of this city’s charm before I leave.