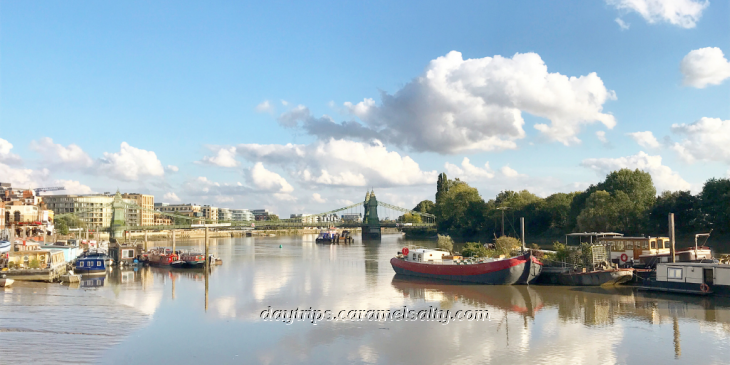 Hammersmith is West London’s major transport and commercial hub. It’s also home to over 150,000 “villagers”. And on top of that, hundreds of workers travel in daily, and many more transit through. So it’s kind of hard to imagine that at the turn of the 16th century there were just two medieval manors here and a small riverside village at the end of Queen Caroline Street, with no more than 5000 people living in or around it.

The walk starts at the first of Hammersmith’s medieval manor which lies directly across from [1] St Paul’s church on [2] Hammersmith Broadway. It was, and still is, [3] Bradmore House, and possibly linked to the ancient Bradmore fields I explored in what is now Brackenbury Village. Only two original features remain – the English Baroque style façade, which was thankfully retained when it was ignominiously converted to a bus garage in 1913. And the original panelled room restored when it ceased being a garage.

When first built, the manor stood alone on its private lands. The main track to the river was Hammersmythstrete, now known as [4] Queen Caroline Street, named after the Queen who lived in Nicholas Crispp’s 17th century mansion which I discovered in my Hammersmith Broadway walk. St Paul’s next door was only built in 1650, and was the first ever church for the village.

The main traffic thoroughfare to the river today is the busy [5] Hammersmith Bridge Road. The pedestrian route runs under the cherry trees in the churchyard. And tucked away behind the church is the third architectural treat in quick succession, the award-winning contemporary [6] Hammersmith Surgery.

From the surgery, the gigantic verdigris iron grids of [7] Hammersmith Bridge loom ahead. The bridge was constructed in 1824, and then rebuilt in 1887 by no other than Joseph Bazelgette. To the left of it would have been the old village of Hammersmith, known to have existed from at least 1294.

On the other side, was the fashionable [8] Lower Mall, sought out by London’s 17th century gentry as a health retreat. Many still descend to this promenade for its rays of sunshine and hint of salty air, so much so that temporary lanes have been drawn up to ensure a Covid free jog for everyone.

Sadly, but predictably, the toll of heavy traffic has led to the temporary closure of this beautiful bridge. However, when first built, its colossal grids in such close proximity to the genteel 17th century houses along the mall, must have come as a shock. These Grade II houses which survived extensive bombing, must provide spectacular views of the Thames from their quaint balconies. One celebrity who retired to one of these houses here in 1684, was Sir Samuel Morland, a prolific inventor.

Interspersed amongst these grand old residences are numerous rowing clubs, a sign of the still popular sport of rowing on the Thames. During the annual Boat Race the mall can get raucous, as enthusiastic supporters lean over the shoulder-high river wall to cheer on the boats, and then continue their revelry in the two pubs along here. The popular [9] Blue Anchor claims to be older than the United States of America. I can only vouch for the fact that it featured in the film Sliding Doors.

Further down is the Victorian [10] Rutland Arms with its cheery assortment of hanging baskets. It also made it to TV on the BBC series, New Tricks. And it also once stood right next to a brewery where the modern block of flats are.

Unmissable with its British racing green doors is the [11] Furnivall Sculling Club named after its remarkable founder, Dr Frederick James Furnivall. He was a co-creator of the Oxford Dictionary, and a rowing enthusiast. As articulated on the club’s website, he founded this initially women only club in 1896 to address the discrimination in a male dominated field.

At this point on the Thames, are a myriad of houseboats rafted alongside each other at [12] Hope Pier and [13] Dove Pier. When the tide is out, these floating houses are left balancing on the clay bank. This must mean that when these piers were built for Victorian pleasure boats along the Thames, they were probably only used at high tide.

Just past the sculling club is [14] Westcott Lodge on the edge of an open park. There aren’t actually any windows overlooking the park. Instead, on its whitewashed wall I find an old streetlamp with a plaque underneath explaining that the lamp was a gift from the city of West Berlin to Hammersmith to celebrate the occasion of Hammersmith’s twinning with the District of Neukoln.

[15] Furnivall Gardens, named after Dr Furnivall too, is a popular picnic and sunbathing spot. It was created in 1951 after all the bomb-damaged 18th century buildings were cleared away. However, two structures from bygone times are marked out. They are the walled garden which marks the spot of an 18th century Quaker meeting house and graveyard, and the circular flower bed on the mound which marks the location of High Bridge, first built in 1751 by Bishop Sherlock.

The mystery of why a bridge stands on solid land is solved by the brown information boards in Furnivall Gardens. The bridge used to traverse a creek that flowed here. This was Hammersmith Creek, which was filled in in 1936 in the name of development. But its outflow tunnel can be viewed from Dove Pier, which also provides fabulous views of the promenades of Lower Mall, and of its sister mall, [16] Upper Mall, to the west

With a creek wide and deep enough at high tide to carry barges, a densely populated village known as Little Wapping ( see this archive photo ) grew on both sides of the creek. A thriving fishing village co-existed amongst the wharves of the eastern bank and the breweries on the western bank. Sadly, wharves, bridge and Quaker house were totally destroyed by WWII bombs.

To follow the flow of the creek upstream to its source from another of London’s lost river, Stamford Brook, I take the subway under the A4 to [17] Hammersmith Town Hall. In the 18th century, boats would have been sailing to the right of the subway, all the way up to Cromwell Brewery on the site of the town hall. The town hall is currently covered in scaffolding, which is disappointing, as I’m unable to once again admire the sculpture of Father Thames on the steps to the Mayor’s Parlour.

The Town Hall backs onto [18] King Street which was the ancient highway to the royal palace at Windsor. Here I am swiftly brought back to the present time with shops catering for Antipodeans, Eastern European essentials, cuisine from the Indian subcontinent, Oriental noodles, delectable French pastries and coffee by an indoor living wall. But amongst these, there hails a vestige from centuries ago – the lustrously purple Salutation Inn, an old coaching house.

I did say at the start that this was a walk between two medieval manors. To locate the other manor, I head into [19] Ravenscourt Park which formed the private property of Pallingswick Manor. Here a moat was built, fed by Stamford Brook. The moat is now a duck pond, and the manor was pulled down after extensive bomb damage. But the beautiful public park has been a source of respite for lockdowned locals.

Looking back, if I could just air brush out all the bits that have now filled in the once open fields, and paint in a vanished creek, a high bridge, river barges on King Street, a fishing village, farms, horse and carts, a muddy royal highway, two grand manors and a few breweries, then I can picture a riverside wander between two medieval manors in a rural London village.