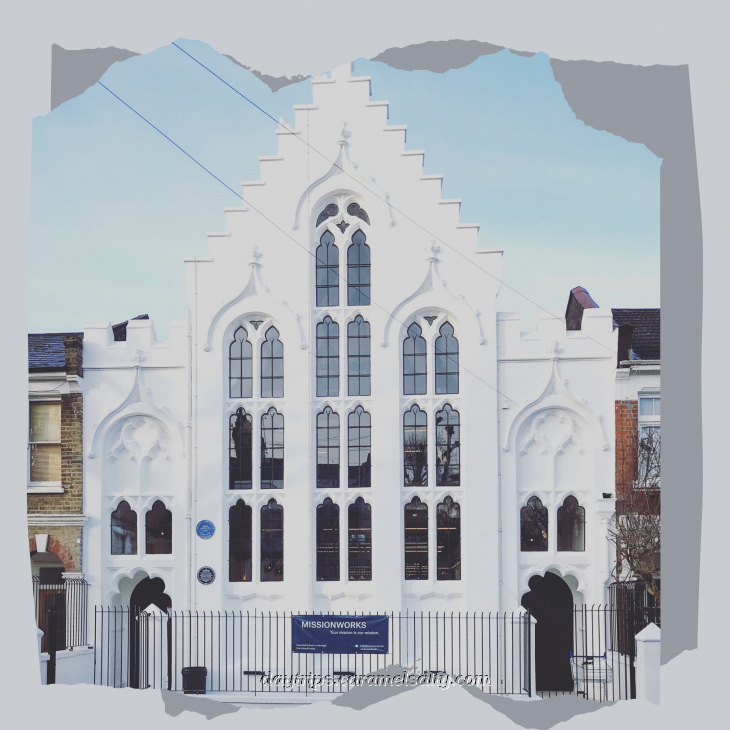 It was the chance discovery of a map within the Bradmore Area conservation report that made me realise that the area once known as Bradmore Fields in medieval times, is what is referred to today as [1] Brackenbury Village. It’s January, and it’s cold. So I’m glad it’s going to be a brisk walk if I’m to cover all that once was Bradmore Fields within my hour’s permitted lockdown exercise.

Not only does the [2] Swallow Café provide a great takeaway cuppa, but its name helps evoke images of the open fields and views that once lay south of Goldhawk Road. However, [3] Richford Street, the first of many that I will traipse down, is fully built up. But, its side streets do provide wonderful views of the grand houses on Hammersmith Grove which I walked previously.

In contrast, [4] Astrop Mews and [5] Grove Mews are made up of working-class abodes. In medieval times, the working classes were peasants known as villeins. Villeins were bonded to their feudal landlords. They paid rent. And they needed consent to leave the land that they farmed. With the scarcity of labour after the Black Death, the villeinage system eventually died off in England.

Without machinery, medieval peasants farmed small strips of land. But as I reach [6] Adie Grove, the only stripes visible are the tarmac roads that now cover Bradmore Fields. The white Grove Studios, plus green door labelled Laboratory, transports me temporarily from marshy pasturelands to the 1920s when Henry Moore moved in here. The blue plaque on the building affirms the creation of two of his masterpieces in these studios.

Next, I wander down [7] Agate Road for a grand walk up via [8] Hebron Road to the magnificent white gabled chapel at [9] 41, Iffley Road. The remarkable former St. John’s Mission Hall (1884, Grade II) is tightly wedged between terraced houses. I happen to catch it with the sun behind the tall windows on the far side, which served to illuminate its interiors.

From there, I head to the cluster of shops in the heart of Brackenbury Village. Naturally, the shops have changed over time. There may no longer be a fishmonger, bootmaker, farrier or oilman, but the butcher is still here. As is an antique shop and café. The sign for the old bakery is still etched on the fanlight of no 51. And the Grecian fronted shop is a Thai restaurant.

The “village square” was also the epicentre of events during the blitz. Bombs fell on Cardross Street, Carthew Road, Banim Street, Glenthorne Road and Cambridge Centre. You would have certainly felt them if you had been enjoying a pint at the pretty Andover Arms which was built in 1878.

Round the corner, [10] Cardross Street, originally called the Rose Garden, has some of the oldest buildings in Brackenbury. Originally it was acquired by the Bird family who moved to Hammersmith in 1775 for brick making. But in the 19th century, they decided to build workers cottages on here instead. Judging by the trellis outside nearly every cottage, this quite charming street promises even more charm in the summer.

When John Rocque completed his map of London in 1745, [11] Dalling Road was one of the few tracks already in existence. Here I find the largest building in the village – [12] Brackenbury Primary School, built in 1879. By this time, waves of immigration had already resulted in walled orchards being replaced by housing. The social classes in Brackenbury had also transformed from labourers and laundresses to clerks, teachers and tradespeople.

Continuing along Dalling Road, I pass the [12] Anglesea Arms and the [13] Thatched House. Unlike John Rocque’s map, there are no longer open fields either side of the track. Fortunately, the conservation document written by Fulham and Hammersmith council vividly describes the scene from 200 years ago. In the very place of the houses I see, there would have been fields of asparagus, strawberries, melons, cucumbers, peas, beans, wheat, barley, rye, grazing cattle and foraging pigs.

As the population in the area expanded, so did the need to nourish them spiritually. There are several churches in the village. The most structurally imposing of them is [14] The Church of the Holy Innocents on [15] Dorville Crescent. I also spot a Welsh Methodist chapel on [16] Southerton Road, which is now an Iranian Students Association.

Before it was forced underground, I should’ve also encountered Stamford Brook, babbling through Bradmore fields towards the Thames. It fed the lake in Ravensourt Park, whose past is remembered by the naming of [17] Perrers Road. This street is named after Alice Perrers who was Edward III’s mistress. Edward had gifted to her Pallingswick Manor House, which once stood where the park cafe is now.

Locals in the area also would have also had the joy of fresh milk delivered to their doorstep from Bradmore farm on [18] Glenthorne Road. The farm’s gone now. In its place I find the Victorian warehouses of [19] Glenthorne Mews set virtually underneath the arches of the District line built in the 1870s.  At the corner of [20] Banim Road and Glenthorne is a 20th century red Arts and Crafts style building. The original public house is now a cocktail bar, and I eagerly await its new burlesque opening as advertised on the posters outside.

The yellow and orange brick steeple of [21] St John the Evangelist Church (1859, William Butterfield) lies just beyond. When the church became redundant it was taken over by the [22] Latymer and Godolphin school next door. Initially there were two separate schools for boys funded by the 17th century bequests of Edward Latymer and Sir William Godolphin. After successful, and sometimes financially troubled times, a single school was created in 1905. Today it’s a school entirely for girls.

It’s hard to miss the startling white [23] Aircraft Factory at the end of [24] Cambridge Grove. According to this website, it really was an aircraft factory. Here is an archive photo to prove it. Apparently, there was also a piano factory here, but I can’t spot any signs of it.

Around the time that St John’s the Evangelist was built there was no school next door, nor the [25] Stonemason pub. It was just fields. Whilst I walk along the elevated pavements of [24] Cambridge Grove and [25] Leamore Street, cars have to dip steeply under the railway bridge. The road was dug out to accomodate the industrial revolution which brought the trains that transported goods and people as factories sprouted up in the city.

As I whizz past the dark blue [26] Dartmouth Arms, I conclude that there is nothing left of Bradmore fields and farms. I did discern some disapproving tuts within the conservation document as it registered some of the less sympathetic house modifications in the area. But in the main, a rather pleasant modern village now stands in what was once vegetable gardens that fed London’s growing population.