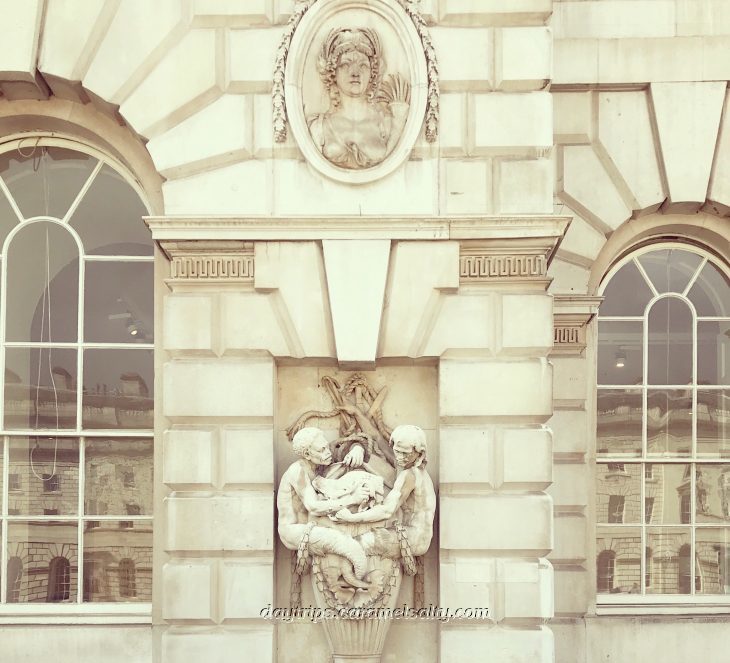 The Strand connects the royal enclave of Westminster and London. It also runs along the Thames. Which makes it an attractive location for riverside mansions for aristocrats. With the added benefit that one could conduct one’s affairs of government or commerce with a short hop on one’s private boat moored up at the bottom of one’s garden.

One such grand residence along the Thames’ north bank is the Tudor [1] Somerset Palace. When its owner, the Duke of Somerset, is executed in 1552, the property transfers to the Crown. It becomes a palace for England’s last few Catholic Queens – Anne of Denmark, Henrietta Maria and Catherine of Braganza, as they live through turbulent times for any Catholic monarch on the throne at that time.

By the 18th century, the Tudor palace stands in disrepair. At the same time, there is much lamenting that London is so dreary in comparison to other European capitals. Hence Parliament embarks on a building programme. Somerset Palace is earmarked to be replaced with a “building of splendour“. The neo classical building designed by Sir William Chambers is the one I stand in front of today.

Somerset Palace is now known as [2] Somerset House. “Learned organisations” such as the Royal Academy, move in, and then move out. And “publiyck services” such as the Navy Board and the Registrar of Birth, Marriages and Deaths also base themselves here. There is plenty of reminders of the previous existence of all these organisations, such as Seamen’s Hall, where main reception is.

The Stamp Office also functions out of here. Until 1855, every newspaper in the country is carried down 2 floors to the basement of Somerset House, to be stamped for duty. It wouldn’t have been a pleasant trip. At this time the Thames laps right up to the arches of Somerset House (see image), making the dark, noisy basement a rather damp place. Perfect working conditions for moles!!

The Tax Office also moves into Somerset House. The Stamp Office, Tax and Excise Offices are merged to form the lovable Her Majesty’s Revenue, Customs and Excise (HMRCE). After taking over most of the building, they eventually move out in 2009, much to everyone’s delight, as it frees up the beautiful Italian renaissance courtyard from being a staff carpark.

When it is built, Somerset House stretches all the way from the Strand to the Thames. To understand how steep the drop is to the river, I wander up [3] Strand Lane where I arrive at the [4] Roman Baths. However, I discover that these were built long after the Romans. In fact they were 17th century water tanks that fed the fountain at Somerset House. But they were converted to baths at some point.

Up to 1994, Inland Revenue staff could have disembarked at [5] Strand (previously Aldwych) station, a short distance from Somerset House. However the costs of modernising the station lifts could not be justified for a station used by 600 commuters. It is a much talked about station, featuring in many films. During its temporary closure during the war, the Elgin Marbles at the British Museum are stored in here for safekeeping.

Continuing along the Strand, I almost miss the red-painted, stone staircase to the [6] India Club, housed in the [7] Intercontinental Hotel. With its portraits of Nehru, Mahatma and Indira Gandhi in its plant filled bar, this place is a throwback to an India fighting for independence. This is where the India League met to mobilize their campaign for India’s freedom.

If the Indian bar snacks and beers at the bar does not entice, then there is always the option of the canteen-style, often busy, South Indian restaurant upstairs. I’m not the only one who thinks that this is such a tasty and cheap curry option in this part of town. Especially as it is a BYO establishment too.

In stark contrast, across the road is the expensive [8] Radio Rooftop Bar at the [9] ME Hotel. From here, I peer down at Somerset House, and across the London skyline. The name Radio Bar is no accident. This is the site where a group of wireless manufactures, including Marconi, make their first ever radio broadcast in 1922, using Marconi’s equipment. The broadcasting company they help form is called the BBC.

Guglielmo‌ Marconi is a real life Italian Marquis, born into Italian nobility. He also invents long distance radio transmission – something that removes the isolation of remote communities and ships at sea. If it wasn’t for Marconi, there would be no Titanic survivors in 1912. Titanic’s distress messages, sent by radio, is picked up by RMS Carpathia. Despite going full steam ahead, it arrives 2 hours after the Titanic has sunk. But at least the 705 on lifeboats are saved.

Before I leave, I drop in at the pyramid like cave which houses the ME Hotel reception. It’s quite something, especially with the continuous light show on the walls. I am not in a hurry. So I sit in its comfortable sofas, mesmerized‌ by the changing patterns.

The view of Somerset House from Embankment ends my tour, whilst an important Italian ends my story. This recipient of the Noble Prize in Physics also makes an appearance on the Italian banknote and the British £2 coin. The airport in his hometown Bologna, is named after him. There are statues and memorials to him in many countries. And when he dies, transmitters fall silent for 2 minutes to remember his huge contribution to the world.