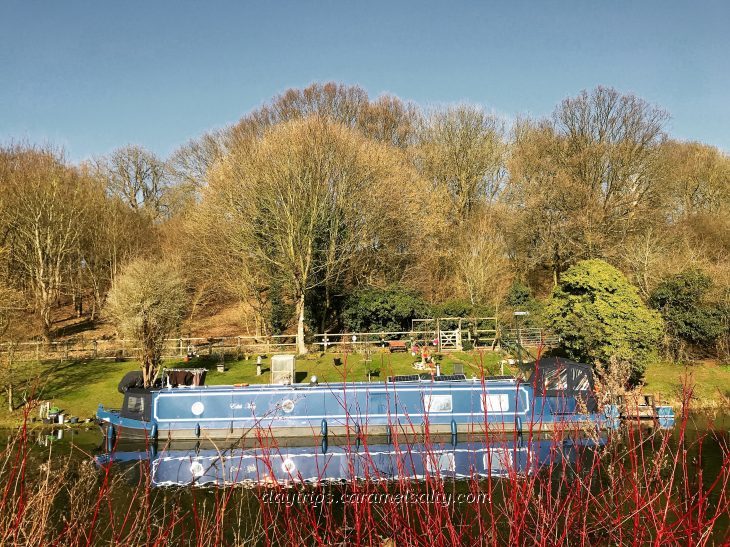 The river Lea is an ancient river. It’s name is thought to have derived from a Celtic name for a deity. It is one of the largest rivers in London, flowing through a long, marshy valley into the city. It still supplies London its drinking water today. And the reason why London’s water is so hard lies no further than the mineral rich Chiltern Hills, where the river originates.

I’m back in [1] Hertford again where I head straight to [2] Folly Island to start my river walk. This little residential island with its lovely waterside pub, sits in a fork in the River Lea. It is the ideal sight for a mediaeval mill within a mediaeval priory. And proof that the river Lea was already hard at work in the 11th century, turning mills along it.

[3] Hertford Castle Weir marks the finishing line for boaters sailing up the [4] Lea Navigation from London. This river has been very navigable for a long time. In fact a record dated 1289 tells about a swamping of a boat on its way to Westminster in London. The river’s navigability allows Hertford to access London’s corn market, a trade which goes as far back as 1571.

I head out along the Lea Navigation towards the town of Ware. A 250 acre water meadow called [5] King’s Mead separates Hertford and Ware. Soaring high above the meadows, is the busy and humming A10. According to a protest sign here, this idyllic view is under threat. Fancy allowing anybody to plonk some soulless red brick modern flats in the middle of all of this wonderful nature!!

The path along Lea Navigation takes me past [6] Gauge House. This is where the New River Lea starts. The stream of water running under Gauge House is the water being drawn from the River Lea to the [7] New River Lea, London’s drinking water. I will seek out the New River, but on my next leg.

As I pass under the A10 connecting London and Cambridge, lorries transporting goods thunder above me. Before lorries, goods were of course, transported primarily by water. When the bargemen of Ware ferry much needed food and water to a plague ridden London of 1665-66, a grateful king awards them the freedom of the River Lea. This allows them a toll free ride for life and free beers at the inns along the way !!

My arrival into Ware is marked by a very large weir, no pun intended ! From the bridge traversing the river, I watch a smoking barge lazily inching its way to the locks by the gushing weir behind me. During the Roman conquest, the ancient Ermine Street, one of England’s oldest road, would have bridged the river Lea somewhere around here to pass through the centre of Ware.

The large [8] Glaxo Smith Kline plant across the weir sits over the Roman settlement that crops up along Ermine Street. When the Roman army arrive, they widen what is a track, to a wide paved road to enable the Roman legions to march abreast, as is the custom, and to carry all their equipment towards York and Hadrian’s Wall.

The early armies marching through the pretty town of Ware are slowly replaced by a new breed of travellers. By the 1400s, more citizens are taking to the roads to trade. As are pilgrims seeking out places of reverence. Ware gets onto the map as a stopping point en route to the shrine of the Virgin Mary of Walsingham.

Ware is also an ideal stopover place, being exactly one day’s ride from London. This, plus the advent of religious tourism in the 14th century, explains why Ware’s [9] High Street is lined with such old buildings. They used to be the inns that accommodated overnight guests. And by all accounts, some were very sumptuous.

Ware’s town centre is dominated by the striking [10] St. Mary’s Church. Inside is an elaborate 14th century font with carved figures. The eight panels on the font represent various saints such as St George, St John and St Christopher, as well as the Archangel Gabriel. The church is certainly worth a drop in, as can be seen from the photos here.

In the 15th century, another industry booms in Ware. 17th century records indicate the importance of malting in this town. Ware becomes famous for the brown malt it brews. Known as porter, it becomes the drink of London’s labourers of the 18th century. Sadly the last malthouse in Ware closes in 1994, bringing an end to this 600 year old industry.

Fortunately, Ware’s malting history is being preserved by others, with articles and archive photos. I, in the meantime, wander towards the lower river bank to gaze at the lovely gazebos at the back of those old inns along the High Street. These [11] gazebos are built to attract travellers back to Ware, after the malting industry helps kill off tourism.

Just how did the malting industry cause so much damage? It was the wagons transporting barley in that did it. They create ruts so deep in the muddy track, that the roads are rendered impassable in the winter. There is even a story that Samuel Pepys, on disembarking in Ware, falls into a rut so deep that they refer to it as a ditch !!

Apparently another touristic gimmick deployed in Ware can be found in the little [12] Ware museum. The museum is closed today. Which is the perfect excuse to return to Ware again. But in the meantime, as the train hurtles towards the crowded, grey, urban landscape of London, I close my eyes and remember those green open spaces I was just enjoying between Hertford and Ware.

Some Information That Could Help