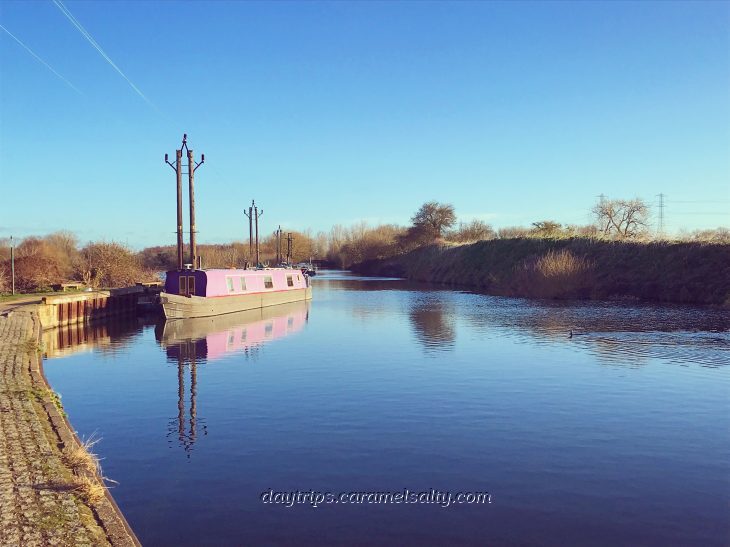 When Gytha Thorkeldóttir (who is she?) offers to William the Conqueror gold equal to the weight of her now dead son, he refuses to turn the body over. So it’s her daughter-in-law, Edith the Fair, who wanders around a battlefield in Hastings to identify Harald’s body. And brings him home to Waltham Abbey ……. a totally unexpected place to find a king’s grave.

I’m in [1] Cheshunt where Edith the Fair once owned a manor. In fact, when the Normans arrive in 1066, Edith is one of the richest persons in England. Just like the town of Ware upstream of the river Lea, Cheshunt is another settlement along the ancient Roman road leading north out of London.

My hot bacon sarnie from [2] Rose Café tides me over as I wait at the level crossing for the Stanstead Express to whistle past. I then cross the [3] Small River Lea, going past the wooden lodges of the YHA and Hertfordshire’s Young Mariner’s base. Within seconds, I’m by the edge of yet another of London’s gorgeous canals – the [4] Lea Navigation.

Cheshunt is the gateway to the incredible [5] Lea Valley Park. But first I have to navigate to the other side of the canal. I follow the canal path in a northerly direction and cross a bridge. The sound of gurgling water hints at a wonderful watery landscape to come.

The network of lakes in Lea Valley Park is a result of the retreating glaciers of the Ice Age. But not quite in the way that I imagine. In the 1920s, this area was pock marked with pits to extract the gravel deposited here by the melting ice.

Eventually some of the pits were filled with waste from local coal fired power stations. These are now the lush green meadows I see. The ones that got flooded are now the lakes.

There are many reasons to spend hours here. The first is simply down to logistics. The park is 10, 000 acres, which is about four times the size of Richmond Park. That’s plenty of walking to do !!

The second reason why I return here every winter is the stunning expanse of water. Their still surfaces reflect the cloudy blue skies, whilst creating wonderful symmetrical images of the barren winter trees and tall metal pylons around them.

There are numerous tracks in the park. Many are wide enough for cycles and wheelchairs. And the able walkers have the added thrill of treading over small wooden bridges leading to adjacent lakes.

This flat soggy water meadow is also a haven for birds. To prove the point, a heron emerges in flight from under the bridge I’m stood on. Honking geese fly over me to water ski onto the next lake. And the drill of a woodpecker punctuates the air.

After an enjoyable stroll around the lakes, I’m back at [6] Lea Navigation where I find an angler with his award- winning catch. Anglers love it here too. Not only have provisions been made for the disabled, but the miles of lakeside provide the solitude they seek.

Locks along the canal control the flow of water. A lock keeper cottage still stands at [7] Waltham Common Lock 10. Crossing over it, I head towards the river Lea, going past a field called Friday and a bird watching hut at Snipe Hide.

This is the kind of place for a pair of binoculars. The park is absolutely teeming with birds. The highlight for me is when a pair of swans and a trio of cygnets form a tight knit circle in the water. On land, there are occasional sculptures of the rich nature around, as well as some reminders of Viking history.

Soon I’m walking along the once large and fast flowing [8] River Lea. It used to be the natural barrier between the Saxon kingdom to the west and the Danes to the east. And I begin to wonder….. Could I be walking in the footsteps of Harald Godwineson, England’s last Anglo Saxon king?

After battling and killing his own brother in Northumberland, Harald heads south to fend off the Normans who have just landed. But it is known that he diverts his journey to stop off at Waltham Abbey.

But before visiting the abbey to find out Harald’s penchant for it, I first venture into [9] Waltham Abbey village. There’s still a Tudor feel to the village in the form of the very wonky [10] Welsh Harp with [11] Lychgate Passage cutting through it. And the theme continues in the nearby [12] Epping Forest District Museum which is housed in an old Tudor house.

For a free museum, it is most excellent. It has a most intricate Tudor wood paneling, exhibits of archeological finds and eccentric collections donated by locals. My favourite was the tea pot collection from a local pub landlady. And there’s even a little garden at the back.

On the way back to the abbey, I take a moment to stand over the Greenwich Meridian, marked by a mosaic on the high street. And to purchase a few products from the Saturday farmer’s market in the square.

Back at [13] Waltham Abbey, I find Harald’s statue by the entrance. In September 1066, he kneels in front of the large black cross installed in the abbey during King Cnut’s reign. It is the very same cross which he believes cured him of his childhood paralysis. And so he prays for another victory.

The Holy Cross of Waltham Abbey “disappeared” days before the abbey was demolished by Henry VIII in 1540, never to be seen again. But the church still has an impressive ceiling and a stupendous organ which is played at regular concerts. And when a false ceiling is demolished, the church uncovers a Doomsday painting in the Lady’s chapel.

Outside in [14] Waltham Abbey Gardens, there’s plenty to explore such as the 14th century stone bridge, the forge, the rose gardens which still had some colour to show in winter, and a stone well. And still very visible are the walls and outline of the old monastery as well as the stately house built by Antony Denny, a pal of Henry VIII who was gifted the land.

Harald dies at Hastings, allegedly with an arrow through his eye. Harald’s grave in Waltham Abbey is marked by a stone plaque. It’s outdoors. But before the dissolution of the monastery, it was the back of the main altar.

There are rumours that he may actually be buried in Bosham. But nevertheless, finding the “grave” of an English king who died at that famous battle of 1066 in a small village in East London, is a pretty remarkable end to a pretty remarkable winter walk.

Other Walks Along the River Lea

One thought on “The Lea Valley – Cheshunt to Waltham Abbey”