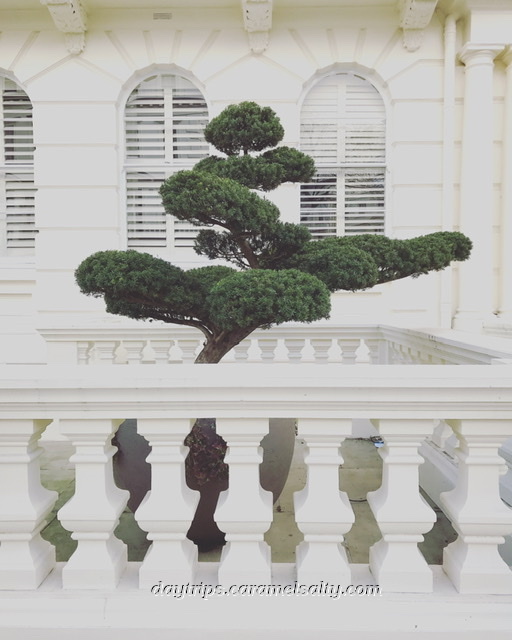 By the 1830s, there already existed a little hamlet in Notting Hill known as the “Potteries and Piggeries”. But it wasn’t quite designer earthenware and gourmet sausage shops as I’d expect of Notting Hill. Instead it was a slum, where pigs outnumbered people by 3 to 1, where a 1000 people (and their pigs) crammed into 250 hovels, where fighting dogs prowled the streets, and where the average lifespan was 11 years, compared to London’s average of 37 at the time. Welcome to Notting Hill !!

So where exactly did this unsavoury crowd of potters and pig farmers live? From [1] Portland Avenue, I wander down [2] Pottery Lane, once known as Cut Throat Lane. Despite its now fashionable cottages, one can still imagine this narrow, curved road being a dark and dangerous mud track that led from Kensal Green to Holland Park Avenue.

Pottery Lane leads to [3] Walmer Road, home to these rowdy brick makers as evidenced by an 1824 [4]kiln still standing. A group of pig farmers also move in. Stagnant water, sewage and pig slurry filled the hollowed out clay pits from the brick industry. According to this map, the largest one nicknamed “The Ocean”, lay in the southern edge of the village. Today it’s [4]Avondale Park.

It’s no wonder the public walked over the hill of Notting Hill to avoid this charming place. That is, until a man named John Whyte builds an enclosed racecourse around the hill in 1837. The road leading up the hill by the beautiful [5] St Frances of Assisi is [6]The Hippodrome, which refers to the 140-acre Kensington Hippodrome whose outline can be seen in this old map.

Speaking of diversions, I too make one to [7] Hippodrome Mews to see how the kiln has now been incorporated into a house. Then up the hill I go via [8] Portland Road towards the most photographed crescents in London. These large white townhouses, many painted in shades of pastel, follow the route of the steeplechase courses that horses once raced on.

The Hippodrome doesn’t last long. The same malleable yellow clay being shaped into bricks at the Piggeries and Potteries becomes so waterlogged that the jockeys refuse to ride. In 1842, the Hippodrome shuts and the land reverts back to the Ladbroke family to be broken up and sold to speculators and developers.

When the crescents are laid out, they are interconnected by steep roads that allow me to peer into the private communal gardens of Notting Hill’s expensive abodes. My favourite of these is [9] Rosmead Road which leads onto [10] Landsdowne Road.

Moving from crescent to crescent, I edge closer to the summit. The most impressive route up is via [11] St. John’s Gardens with its view of [12] St. John’s Church amongst tree stumps. The church stands at 99 feet above sea level. And as the sign outside the church attests to, this grassy knoll was the grand stand for the Hippodrome.

The church is worth visiting for its exhibition of Notting Hill’s fascinating history. Stepping back outside, I turn the clock back to 1845 when the church was built. Then, it stood alone surrounded by hay fields. Now it’s surrounded by grand white houses on [13] Landsdowne Crescent, apart from no’s 3 & 4 which were built from the yellow church stones left over.

To find the Hippodrome’s entrance, I head down to where [14] Kensington Park Road meets [15] Pembridge Road. The green cab shelter more or less marks where excited punters streamed through the Hippodrome’s entrance to its first race. They are joined by the incensed public, now forced to walk through the Piggeries and Potteries, who tear down the 7-foot fence to gate crash the day’s proceedings.

With the demise of the Hippodrome, the first houses were built on Kensington Park Road. Alas the original villas have been replaced by blocks of flat. With rapid development over the pastures of Notting Hill, fortunes were made. But in the case of Dr. Walker, fortunes were lost as he catches the end of a property slump.

Some say that Dr Walker’s plots on [16] Elgin Crescent and [17] Landsdowne Road were unpopular as they were behind the brow of the hill. Some say it was the complaints of the smell of fat being boiled down from the nearby Potteries and Piggeries that kept people away.

However it’s when Dr. Walker’s builder, and his main creditor, goes bankrupt, that development stops. Dr Walker absconds to the continent leaving behind a scene of unfinished roads leading to nowhere, open drains and carcasses of half built houses. The [18] Elgin Pub on Ladbroke Grove stood lonely in this bleakness.

However London recovers, and building continues. But sadly it builds over the rest of the ancient track that led to Nutting Barns Manor farm. However my journey in the general direction of where this 1800 farm stood, finds me a [19] Carmelite Monastery instead.

The monastery lies over one of Nutting Barns farm’s two ponds. The farm is supposedly named after the many nut trees found in the countryside of Notting Hill. The farm house itself is known to have been where [20] St. Helen’s Church is today.

My search for the rest of the track towards Kensal Green is all but in vain. Eventually I arrive at the [21] Grand Union Canal. Until the mid 19th century, people came to Notting Hill for country walks, surrounded by fields with names such as Pond Field, Ploughed Field and Eighteen Acre Field. The 1801 Grand Union Canal puts Notting Hill on the map, and marks the beginning of the gradual encroachment of these fields.

Nature’s blooms of spring and summer are now restricted to patios or window sills, given that this once remote country side, with a slum that even shocked Charles Dickens, transforms into streets of houses that command prices as high as the hill that lies in the middle of it.

But on my way back to catch the bus by [22] Ladbroke Grove Sainsbury’s, I spy a tropical green delight in the grounds of [23] Kensal Rise House. There may no longer be any sign of the thick Middlesex forest that once surrounded Nutting Hill Barn manor, but it’s not all just big white expensive stuccoes in Notting Hill.

Travel Tips For You