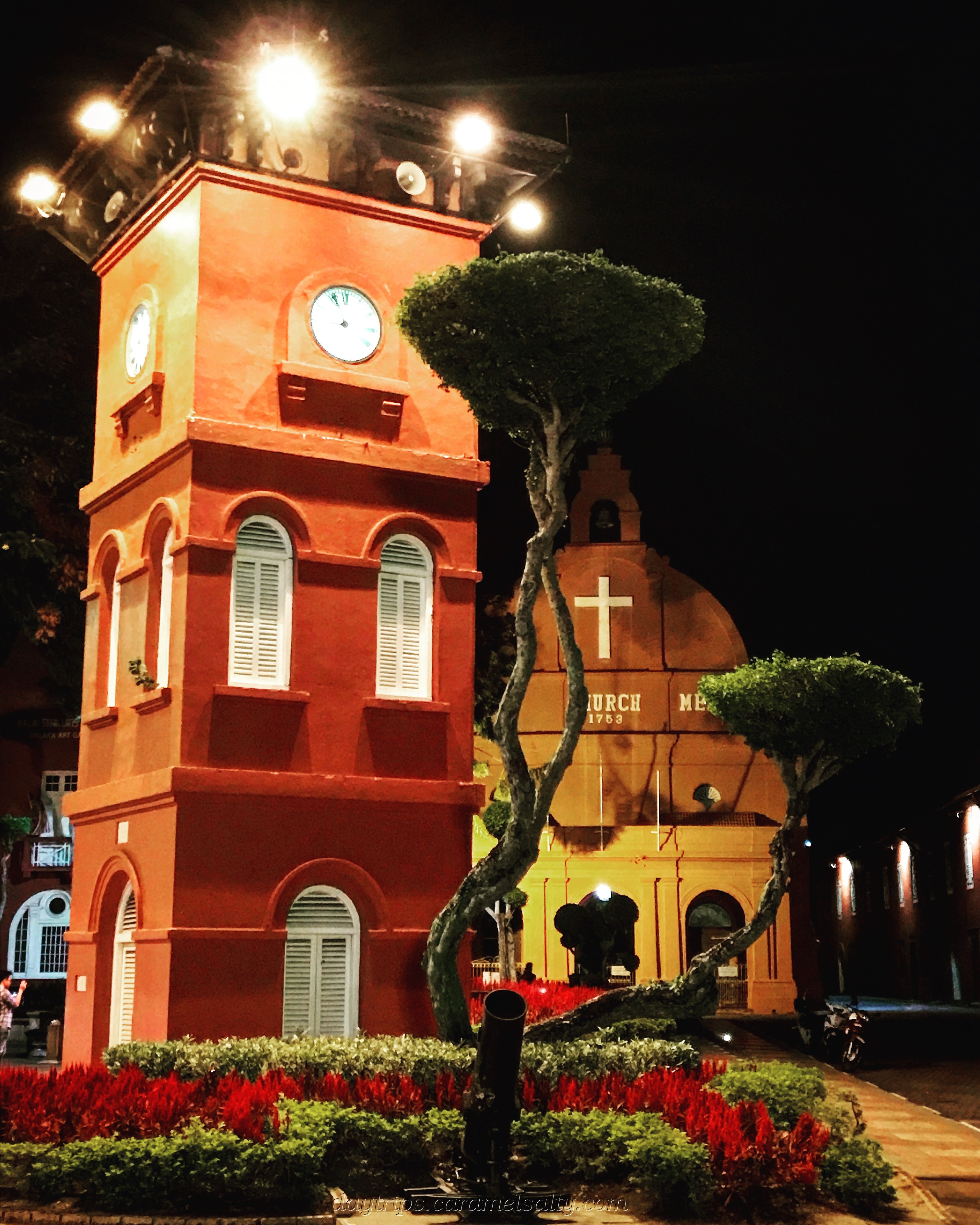 I have only dim recollections of school history whilst growing up in Kuala Lumpur. The one thing that sticks with me though, is that Melaka seemed to have tonnes of history, being one of the earliest Muslim kingdoms established in the Malay peninsula, and also the first European colony. This trip could be an interesting test of my memory.

The bus, the only mode of a direct public service to Melaka, travels along the rather uneventful highway to Malacca. It’s only the wonderfully rich roadside vegetation that saves me from a rather lacklustre 2 hours.

Within an hour of arriving at the Melaka Sentral Bus Station, I have bussed into the tourist nerve centre of Malacca, checked in to my hostel and made my way to its iconic Dutch Square, and tourist enclave.

The [1] History and Ethnography Museum seems a good a place as any to start my historical tour. It has a lot of material on the successful Malacca Sultanate of the 15th century. A great start to my history revision.

In the beginning, there was only a fishing village inhabited by locals known as Orang Laut (Sea People). Then a Palembang prince on the run, named Parameswara, arrives in 1400.  A defiant mousedeer takes the credit for the founding of Melaka by Parameswara.

The museum covers the gamut of Melakan history from the Melakan Sultanate set up by Parameswara and his merry band of men, right up to Malaysian Independence. And there is more history in the other museums within this complex, including

Last but not least is the [5] Governors Museum. This was the site of Sultan Mahmud Shah’s palace, when it was seized and destroyed by the Portuguese in 1511. This somewhat lengthy but interesting article helps explains how the first European invasion of Melaka came about. In short …

The church ruins at the top of the hill are that of the oldest church in South East Asia. It began life as a little chapel for the Portugese, called Our Lady of the Hill (1521). It is the Dutch, who come next, who call it [6] St Paul’s Church, and rename the hill to [7] St Paul’s Hill.

From the front of the church, I can see the distant sea. However a 15th century painting I spot at the History museum and other old photos would suggest that the sea was once, right by the base of the hill. Oh, the joys of land reclamation.

Down the otherside of the hill is [8] Porta de Santiago. It’s the only section remaining of the A Famosa fort, originally built by the Portugese to defend from the self-exiled Sultan of Malacca. The fort covered the entire hill. Porta de Santiago is clearly by the shore at that time.

Although the Portugese had built the fort, Porta de Santiago has the inscription of the Year 1660 and the Dutch East India Company’s coat-of-arms. About a century behind the Spaniards and Portugese in sea exploration, the Dutch eventually get a foothold in many Portugese territories in the East, via the well resourced and ruthlessly efficient Dutch East India Company set up to conquer the spice trade and to reach Indonesia. And so, the Portugese are expelled in 1641.

Unfortunately, the British who take over as caretakers (1795) for the Dutch during the occupation of Holland by France in the Napoleonic wars, destroy the fort and forcibly repatriate the Dutch to Penang, in an attempt to break the Dutch monopoly over the Straits of Malacca. Thankfully, the far sighted and history lover, Sir Stamford Raffles, arrives just in time (1810) to save Porta de Santiago.

The Anglo-Dutch treaty of 1824 redistributes territory between the Dutch and the British, and the British take over Malacca, to form the Straits Settlement together with the British colonies of Penang (1786) and Singapore (1819). This is the start of a new chapter of Malaysian history under British rule.

I watch the sunset along the Melaka river from [9] Sid’s pub. As I edit my photos over a gin and tonic, I suddenly realise I have one from a museum, that has been taken from more or less where the pub is.

If I’d been sat at Sid’s a 100 years ago or more, then the far end of the Casa del Rio hotel ahead of me, would have been right on the Straits. If it had been 500 years ago, then against a backdrop of large sails in the distance, there would have been small boats ferrying Ming pottery, colourful silk, sweet smelling spices, tea, Indian textiles, exotic feathers and glittering jewellery to the river bank. The din from traders bartering and labourers shouting, would have been interrupted every now and then by the protesting elephants being ordered to cart these goods to the warehouses.

But as I don’t have a time machine, I have to contend with a flyover in the distance, diesel tourist boats plying the river, the strains of Bon Jovi, neon trishaws creating a din and shops trading in tourist memorabilia. Oh, the joys of modern living.

Some Useful Things to Know