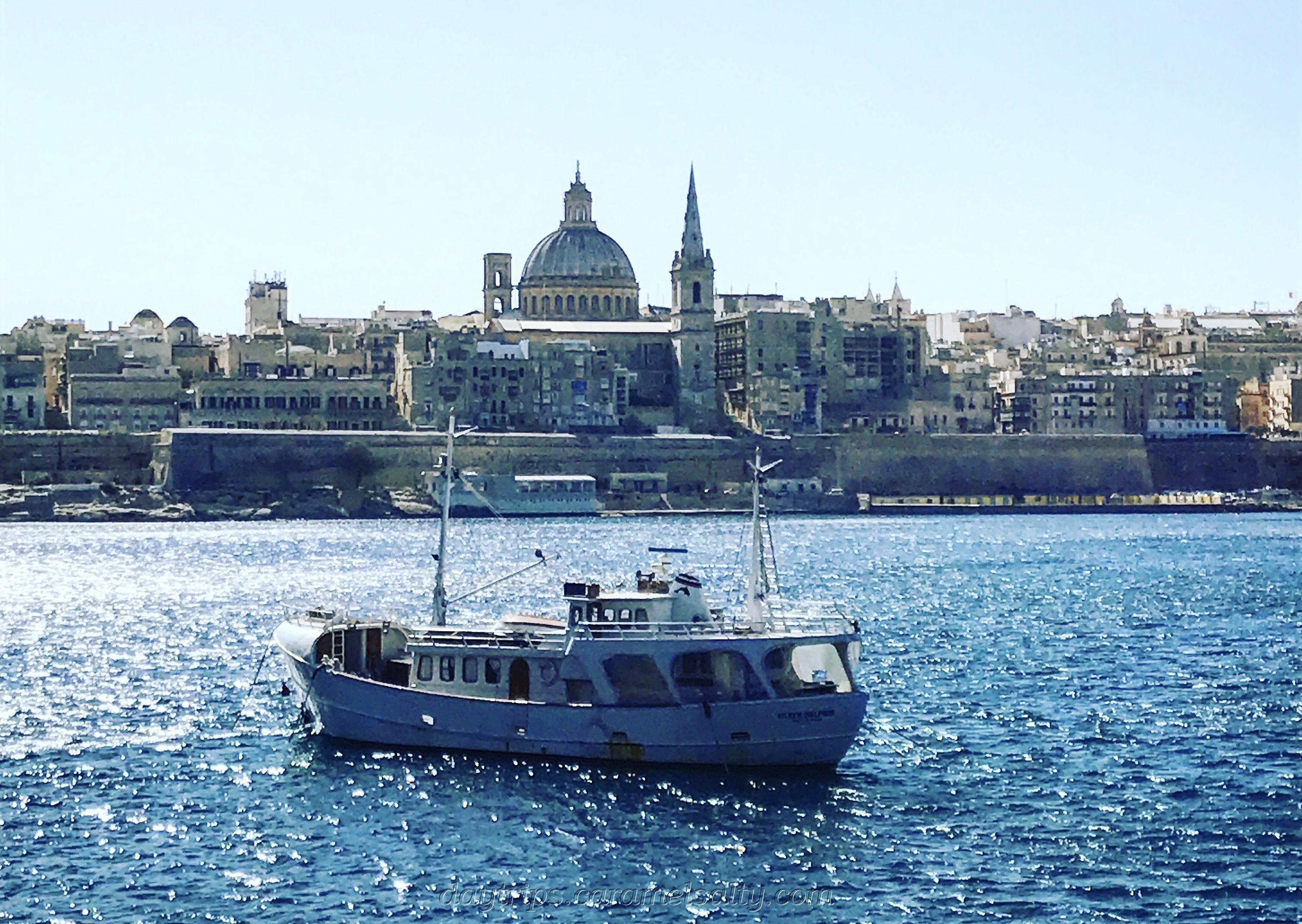 I have a simple plan today. I’m going to snake my way around the bays from Valetta to Sliema, until I get to St. Julian’s Bay. I guess it’s my version of the Valetta harbour cruise, except it’s very much on shore, and along the bus routes to Sliema.

I start by the first of many marinas that I will encounter during the day. Heading round to the[1] Pieta bus stop, alongside an already busy Triq Marina carriageway at only 06:30 in the morning, the rising sun casts a warm glow on the old terraced shophouses across the road.

By the time I get to [2] Marina bus stop, the sun has risen over the fortress city of Valetta. All is still and quiet on the Msida Yacht Harbour, in contrast to the rushing traffic beside me.

From [3] Kullegg bus stop I get a good view down the marina. This is the view that I’ve seen every time I’ve caught the bus to Cirkewwa for the island of Gozo.

Just by [4] Gnien bus stop is the Msida Parish Church. It would appear, that from this point onwards of my walk, the only old buildings left in Sliema are its churches.

As I wander to [5] Xatt bus stop, I get away from the main traffic. But the architecture style changes. New, modern, functional blocks of flats start to appear. Desperately I seek for something a little bit more inspiring. Fortunately I manage to find something old and something blue.

The [6] Embassy bus stop is aptly named. Stately looking buildings flying the flags of the nation they represent come into view. But the one that catches my eye, is a beautiful villa. With no designated flag, I imagine that it’s some lucky ambassador’s abode.

Round the bend with great views of Valetta, is the [7] Ta Xbiex bus stop. The view is so captivating that they’ve built a pretty little promenade with colourful benches. Though why they install back to back benches is beyond me. With views like this, who’d want to sit facing the road?

At [8] Elizabetta bus stop, I find yet another yacht marina, the [9] Manoel Island Yacht Marina. The water in this marina is so wonderfully clear, and filled with fish.

I am now at [10] Gzira bus stop, at the entrance of  [11] Manoel Island. It’s 07:30 in the morning and I finally find an open cafe. Devouring a bacon and egg butty, I savour the views in the sunshine.

I’m now ready to explore Manoel Island. The island was first used in 1592 as a quarantine hospital and apparently has a resident ghost. But fortunately the only unusual sighting I get is a privately funded [12] Duck Village.

The residents of the Duck Village also include turkeys, rabbits, hamsters, hens, cats and a brave pigeon or two. I’d never thought that I’d ever say this in a non political context, but in this village, the turkeys proved they were in charge.

I make my way down the left side of the island, through the security barrier for the MIDI headquarters located at the end of the island. Thankfully the barren brown field site is punctuated with wild flowers rustling in the wind. And trees.

Suddenly, through the trees, I spot the wall forming one of the points of the star shaped fort. I had tried to get close to the fort, but as it’s being restored and surrounded by a wall, I couldn’t see much.

When I get to the small office buildings at the end of the road, I get a fabulous [13] view of Valetta through trees on a piece of scrub.

Trudging back to the mainland, I spot a piece of street art that I had missed earlier. How I managed to not spot those eyes watching me, I don’t know.

Back on the mainland, [14] Ponsonby and Bouverie bus stops continue round the harbour. The sight of bookworms on balconies of flats, give away the fact that I’m clearly in tourist land. And also the numerous booths selling cruise tickets alongside the waterfront.

Which leads me nicely to the [15] Ferries bus stop, the launch pad of various ferry companies promising a fun day out. The only noteworthy thing here is the [16] Parish Church of Jesus of Nazareth, standing out amongst the modern buildings surrounding it.

At the [17] Xerri bus stop, I find an old sea water distillery factory, now a printers store. Trying to not get run over whilst I take a photo is tricky. Maltese drivers tend not to look out for pedestrians.

From here, there are now signs for the [18] Point Shopping Mall. I walk along a high rise pedestrian walkway which affords great views to Valetta and Manoel Island. Unfortunately I have to enter the mall, set in what can only be described as mock Maltese architectural front, to go down one floor to pick up the walk.

[19] Locker and Hallet bus stops are surrounded by tedious concrete and tarmac. But by the time I get to [20] Chalet, the scene opens up again to a bay. Flat stone ledges protruding out to sea make a perfect spot for sunbathing. Ahead I see a promenade with bars and restaurants. It’s the start of the trendy and desirable area of [21] St. Julian’s Bay.

It’s a pleasant stroll along the promenade. I sit on a bench, enjoying the view of the open sea. It’s now very hot. I remove a couple of layers, before than seeing a sign at [22] Ghadir bus stop, warning of indecent behaviour. Ooops!!

It is no surprise that at [23] Tori bus stop there’s a defensive tower, now converted to a pizzeria.

And at [24] Exiles bus stop, the [25] Independence Gardens is a lovely park with trees, gazebos, fountains and walkways below me. A welcoming piece of greenery in the otherwise built up area of Sliema.

Across the rest of St Julian’s Bay I now see larger hotels, casinos, shops and restaurants. And so I decide to call it a day and catch the bus at the San Giljan stop back to Sliema ferries. I have a choice of taking a harbour cruise for the rest of the day , or simply taking the ferry to return to Valetta.

Compared to Valetta, Sliema is devoid of old characterful buildings. But the harbour walk to Sliema is certainly very pleasant. And it certainly did not lack in wonderful views of Valetta and Manoel Island. Highly recommended.

How to Catch a Bus and or Ferry Back

One thought on “Malta – A Harbour Walk to St. Julian’s Bay, Sliema”