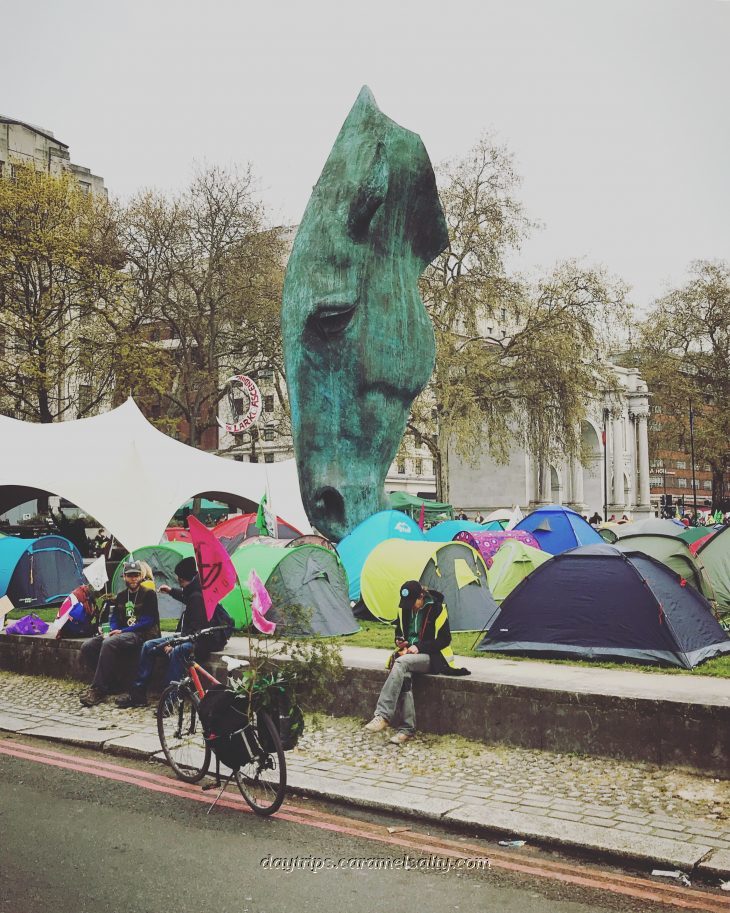 The archbishop’s men surround St. Mary-Le Bow on the Strand. The charismatic, university-educated William Fitz Osbert is trapped inside. He is smoked out, stabbed and then dragged naked by horse all the way to Tyburn. There, he is hanged by a brook, the first ever recorded execution at Tyburn. His isn’t the last. Many more follow.

The tiny hamlet of Tyburn lies at the junction of two Roman roads – [1] Oxford Street and [2] Edgeware Road. Surrounding it is forest in which wild boars and deers roam. As idyllic as it sounds, it harbours a dark secret. This is where for centuries, Londoners and enemies of the state were hanged, beginning with Osbert’s in 1196.

Jack Sheppard, Dick Turpin, Oliver Cromwell (already dead, but still hanged!) are amongst the many executed at Tyburn. In 1571, during the reign of Elizabeth I, the gallows are rebuilt to enable up to 24 to be hanged simultaneously. It’s called the Tyburn Tree (image here) and stands prominently on the main road into west London as a warning to all.

A model replica of the Tyburn Tree can be found in the nearby [3] Tyburn Convent. The church which is open and can be toured, remembers the 105 Catholic martyrs hanged at Tyburn between 1535 and 1681. The persecution that begins with Henry VIII, sees many Catholic priests, as well as the Catholic women who sheltered them, hanged at Tyburn.

Tyburn is renamed Marble Arch when the arch outside Buckingham Palace is moved to [4] Cumberland Gate in Hyde Park. This is around 1847, after Queen Victoria protests that her carriage doesn’t fit through said arch. When Park Lane is expanded in the 1960s, the arch ends up alone and stranded on a traffic island.

For an arch built to mark the victory over Napoleon, [5] Marble Arch, has such a dogged history. When the Duke of Wellington puts the brakes on its overspend, John Nash, the original architect and designer, refuses to cooperate with his successor, William Blore. Hence the finished arch today is no where as grand as Nash first envisages it to be.

Whilst Elizabeth oversees mass executions at Tyburn, her father, Henry VIII, oversees the creation of a royal hunting ground, with fencing all around. He does this by acquiring Hyde Park manor and all of its 620 acres in 1536. The park is eventually made public in 1637 by Charles I. Just in time too for Londoners seeking sanctuary from the plague in its huge grounds.

Another group of people who head to Hyde Park is the Reform League, a movement for worker’s rights. But this is in 1866 as they make their way to an open air meeting. When the police block their route, riots break out. Despite mutterings within the establishment about decent folks being prevented from enjoying the park, the authorities don’t stop the 150,000 who turn up again the following year.

This incident leads to [6] Speaker’s Corner being recognised in 1872 as a place for free speech, as long as it’s lawful. When first set up, Speaker’s Corner stretches from the paved corner to [7] Reformer’s Tree within Hyde Park. Many famous names, including Karl Marx, orate at this corner. And are heckled too, by those that gather round.

Running alongside Henry’s 16th century hunting park, is [8] Park Lane. Except that up to the 18th century, it’s a muddy little track called Tyburn Lane. The Teo Bourne, a little brook, babbles along here. The king hunted on one side, whilst on the other lay 100 acres of swampy, undeveloped Mayfair.

None of Tyburn’s springs run overground any longer. But back in 1236 the brooks at Tyburn supply London with drinking water. A pipe is run from around Bond Street Station, to Charing Cross, over the bridge across the river Fleet, up Ludgate Hill and all the way to a tap at Cheapside. Much of this track would’ve been desolate and forested.

By the time Speaker’s Corner is established, Mayfair is fully developed. With its fine view of Hyde Park, prestigious buildings pop up along Park Lane. Today, these are mainly luxurious hotels, luxury car showrooms and luxury flats. Nestled in between them is a very medieval looking [9] Barclays‘ branch at No. 47.

When Park Lane Hotel (now the [10] Sheraton Park Lane) opens in 1927, it’s the first British hotel with ensuite bathrooms in every room. The [11] Park Lane Hilton, has a roof top Michelin star restaurant, [12] Galvin at Windows, which offers fantastic views of Hyde Park. [13] The Dorchester, on the other hand, seems to be currently attracting a protest against the Sultan of Brunei.

From the [14] Animals in War sculpture in the green on Park Lane, I can just about make out Marble Arch. The hanging ritual involves carting the condemned from London to Tyburn along Oxford Street. Which would have provided undesirable views of boisterous crowds, about-to-be corpses and hanging corpses from the windows of the posh houses in Mayfair.

As a result of the “not in my back garden” protestations, the gallows are moved to London in the late 1700s. At which point, I head back into [15] Hyde Park for some respite from capital punishment. There are plenty of delightful spots to explore in this enormous park, beginning with the old [16] Hyde Park police station with its constantly lit blue police lamp.

The sounds of squeals and quacking guide me to the duck filled [17] Serpentine, built by Queen Caroline, wife of George II. In this part of Hyde Park, I also find the [18] band stand, the [19] cavalry memorial, the [20] holocaust memorial gardens, and [21] statue of Achilles. And plenty of established trees.

When I take the path leading into a secluded dip behind the stone bridge over the Serpentine, I find another little known gem. [22] The Dell is a private garden. But the low metal railing allows me to admire the impeccable lawn, wonderfully landscaped garden and delightful waterfall.

At the bottom of Hyde Park, alongside the [23] South Carriage Drive, is the [24] Rose Garden. It’s far too early for roses, but there are some wonderful displays of tulips. Also not to be missed is the [25] Huntress Fountain and pergolas. And in a small glade next door, I find wild blue bells amongst uncut grass.

The joyful [26] Fountain of Life has to be the nicest fountain in this part of the world. Naked nymphs dance with scant regard to the hundreds of tourists milling around and the speeding traffic on Park Lane. Except that today, there is no traffic on Park Lane because of the protest on climate change at Marble Arch.

As I walk with the same scant regard as the nymphs, but fully dressed, through the middle of empty Park Lane, I realise that my story has come a full circle. Osbert is hanged at Tyburn for standing up for the poor. 19th century workers clash with police by the arch for the right to gather in public. Camping protestors surround Marble Arch today. Perhaps the lonely arch has a purpose after all!!