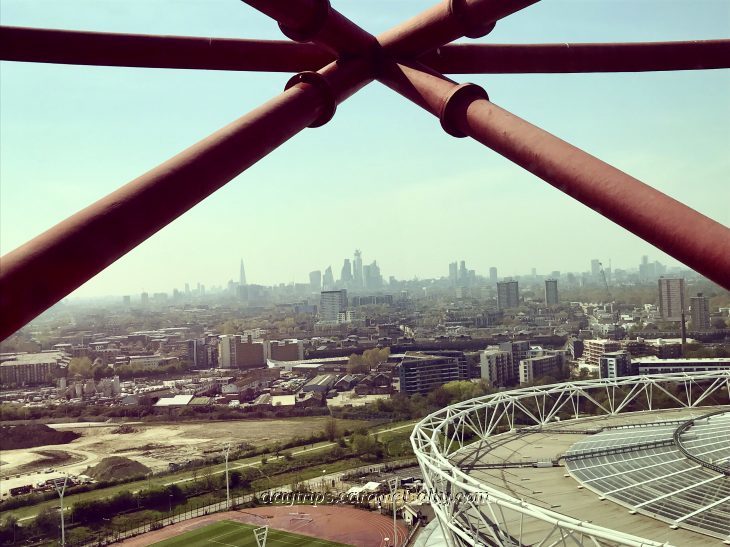 In ancient times, the most downstream crossing over the River Lea was at [1] Old Ford. The Romans use it to go on to conquer the north of England. But unlike today, when they traverse it, the unrestrained River Lea is a wide, fast flowing river.

The [2] Lea Navigation and the [3] River Lea merge at [4] Old Ford Locks. But in Roman times, the Lea Navigation does not exist. Instead, it’s the River Lea estuary that stretches all the way from the Thames to here. Which means my entire walk from Three Mills to this point would have have been a tidal, salty river in those days.

The company pumps out unfiltered water, but denies it strenuously. But the ensuing 1866 cholera outbreak kills 4000 people. It’s the last ever cholera epidemic in London. But the scale of it lifts the East End to the top of the cholera mortality table by a long way.

An aerial photo of the Bow Back Rivers by Old Ford Locks shows a post war industrial wasteland, having suffered extensive bombing during WWII. As London is rebuilt, this area becomes a dumping ground for rubble. But things begin to look up when London is awarded the 2012 Olympics.

As I follow the [3] River Lea into the Olympic Park, I soon catch sight of the main stadium. But apart from stadiums, there are plenty of little secrets to discover, like the little secluded [5] Great British Garden along the river Lea. It’s a little long winded to get to, but it’s certainly worth a visit.

I still remember the river Lea featuring in the games’ opening ceremony in 2012. The Lea first flows through this valley some 12,000 years ago. Hunter gatherers settle in the area, for the river allows them access to the once dense forests of England.

In 879 AD the River Lea becomes the official border between Saxon Wessex, ruled by Alfred the Great, and Danelaw ruled by Guthrum. From the Domesday Book (1086) it is known that the Saxons had many mills in this area. Even the Knight Templars owned one here.

The park today is a stark contrast to how it was in the 1960s. As the rivers start to slit up, the canals of the Bow Back Rivers, which this complex of rivers is known as, falls into disuse. Pudding Mill River (more of its history here) is filled in during construction, but others, such as Channelsea, St Thomas’ Creek and Prescotts Channel still remain.

The area degenerates from neglect and becomes so undesirable that no one complains when a nuclear power station is built in 1980 along Pudding Mill River. One of the foremost task before Olympic construction begins is to give the all clear for radioactive waste.

Before pilings are driven into the ground, a team of archaeologists bore their own holes to study the secrets buried below. Their findings make a great story. For example, they discover that the [7] Aquatics Centre stands over a Bronze Age farming field.

Today, the miles of waterways that meander through the park is navigable. Locks such as [6] Carpenters Road Locks have been rebuilt. Rivers have been cleaned up. River beds have been dredged. Over 4000 trees, shrubs and flowers thrive around green lawns and river banks.

The [8] London Stadium, the main Olympic stadium, is now home to West Ham Football Club. The Olympic size swimming pools, including an underground one at the [7] Aquatics Centre, is open to the public. The velodrome, the Copper Box arena and hockey stadium are all still in use too.

One structure standing silently by the London Stadium is the [9] Olympic Bell cast by the Whitechapel Foundry, the same foundry that cast Big Ben. It can no longer be rung, given that it has the lowest tone in the world for a bell, that the sound would be so great and startling.

On the other hand, the red mangled shape of the [10] Acerlor Mittal‌ Orbital makes a loud statement on the London skyline. Made of 2,000 tonnes of steel, it is the largest sculpture in Britain. And highly recommended for its 360 view of London.

The top viewing deck is made up of an inside deck and an outside deck of unfettered views of London. I also get a good aerial view of the complex of rivers around the Olympic Park. And even a peep inside the [8] London Stadium through its open roof.

There are various options for descending this structure. Despite the screams suggesting that it is rather thrilling to arrive at ground level on one’s bottom, the slide does look rather claustrophobic to a grown up like me. Instead, I opt to walk down the 455 stairs and get up close to its red frame.

There are plenty of trails within the Olympic Park that takes me along rivers, over bridges, around stadiums and through lawns. That in itself is huge walk, as the park is almost as large as the walled city of London.

As I exit the park towards [10] Westfield Stratford Shopping Centre, I spot a tree with a metal ring hoisted around its branches. These are the history trees, located at each of the 10 entrances into the park. There is a complete list of trees, locations and of the historical inscription on each ring.

The shadow of the ring is meant to align with the bronze inlay on the ground at the anniversary of a significant date and time from the Olympics. But to me the most significant moment was the end of the Olympics….

As my day has shown, when the games depart, it leaves behind a vibrant legacy of sport, recreation and culture in what was once an area that was dead, polluted, grey and uninviting. Now that, is pretty remarkable.

A Checklist For You