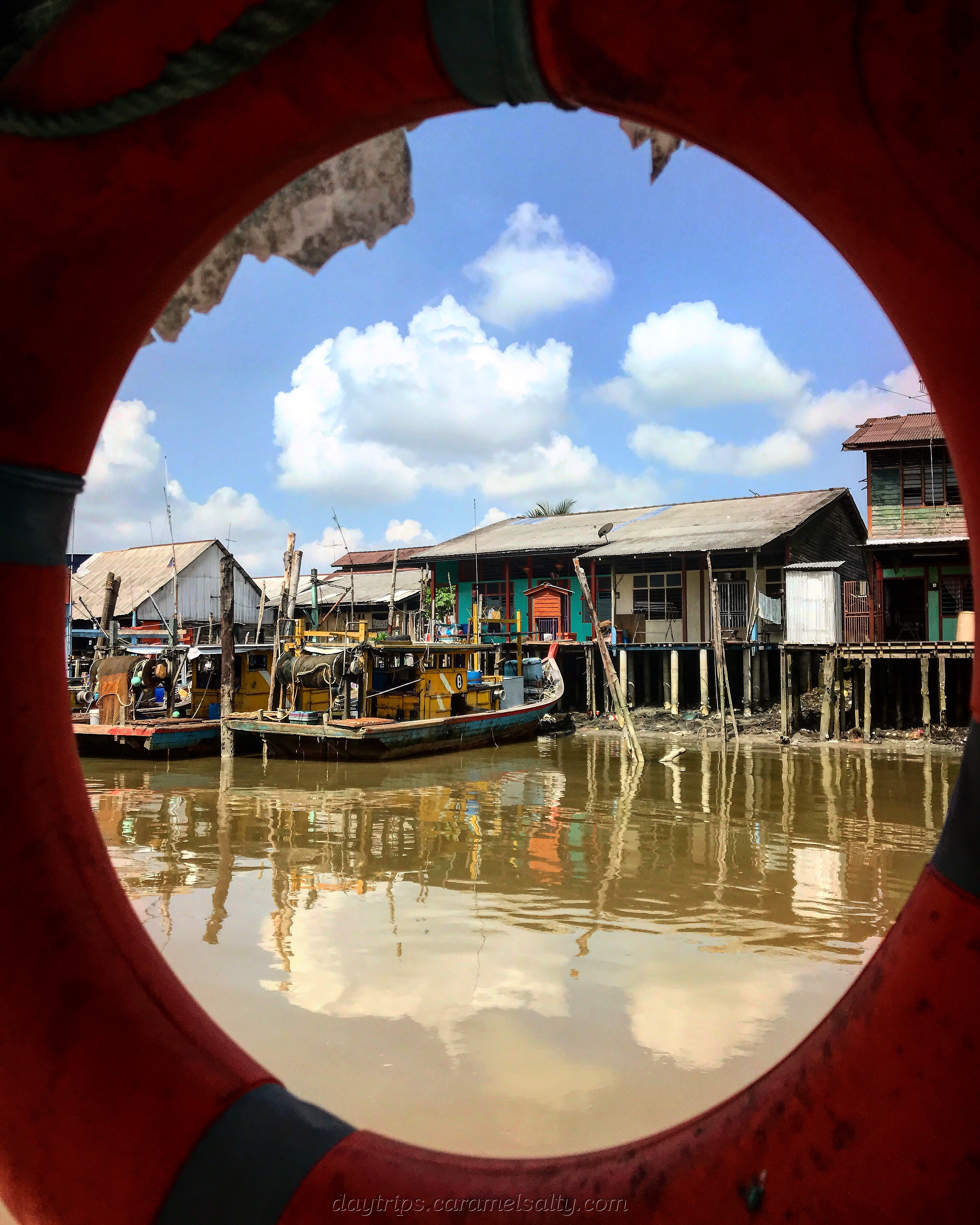 A set of local circumstances spur the British to build a train track from Taiping to Port Weld to serve the local tin mines. And so in 1885, Taiping becomes Malaysia’s first ever train station. But it’s not the modern station I alighted from when I arrived in Taiping. It was actually, what is King Edward’s school, today. And as for Port Weld, it’s now known as Kuala Sepetang.

Alas, this historic train line is obsolete today. So I’m going to have to catch the bus.

I take a long detour to the Taiping Bus Terminal (Terminal Taiping) with an early morning walk around the Lake Gardens. Despite the still dark skies, like the many keen joggers around me, I enjoy the more subdued beauty of the gardens at this time of day.

When I get to Terminal Taiping, I am greeted by a motley of rickety buses. They’re just like the ones I used to catch as a child in Kuala Lumpur. This could be a fun, helter-skelter half hour ride to Kuala Sepetang.

A bus timetable is cellotaped next to the ladies toilet entrance. Which is fortuitous, as I had no luck at the shut tourist office in Taiping. And on cue, a blue air conditioned #77  Omnibus Perak bus arrives. It seems sturdy enough to get me to the port without incident.

Breakfast time at Kuala Sepetang is a hive of activity. The couple of streets making up the centre of town is already colourful and noisy. I can only imagine how much boisterous it would have been during the boom years of tin production.

My first stop is the train station, or rather what’s left of it. Only the station sign, nestled among houses round the corner from the town centre, remains. There’s nothing else to remind me of how it looked when it was first built.  So, with great difficulty, I try to picture British officials patiently waiting in the tropical heat, in their best regalia, for the arrival of the very late inaugural train. (see initial article).

The stalls of drying or dried fish indicate that fishing is the main livelihood of this village. Everything here is simple and traditional, apart from the gigantic 4 storey high, with colossal eagle mascot to match, Kang Kao Seafood restaurant.

The easily located harbour is where I find boat owners willing to take me on a tour to nearby islands. I book on to a 2 hour tour and browse amongst the fish stalls whilst the boat owner gathers a group. Twenty minutes later I’m setting off to Kuala Sangga.

Matang is rich in mangrove trees. As we speed to Kuala Sangga, towards the Straits of Malacca, mangrove forests line every shore of the various islets. Their complex root is a haven for insects, fish, reptiles, and small animals. So unsurprisingly, I spot a monitor lizard slinking into the water and a wild boar rooting around a muddy beach.

As the boat nears Kuala Sangga, I spot signs of fishing activity. Fishing traps are marked out by timber posts held firmly in the muddy river bed. The few fishermen in these parts work from small diesel boats. They are extremely dexterous. One even steers the outboard with his foot, whilst standing.

Sadly, Kuala Sangga is almost a ghost town. The village comprises a row of houses along a wooden deck. Many of them are empty as families seek better lives elsewhere. And for those who remain, they work from dawn to dusk, eeeking out a living from fishing.

An attraction in the village is the Christian chapel. It’s religiously maintained by the all Buddhist community here in gratitude for the time when a spreading fire, which destroyed much of the island, miraculously stopped at the church.

Next it’s feeding kites time. It’s so marvellous to see these graceful birds swoop down at close proximity, to pick up the offerings from our boat. Followed by a fish farm run by a sprightly weathered 70 year old. Here I get to see red tilapias and helmet crabs. I love the archerfish demonstration. Incredible Olympic standard accuracy from such tiny species.

The trip ends with the boat drifting along an adjoining island to Kuala Sepetang. Although more populous than Kuala Sangga, the inhabitant numbers here are also dwindling. So I’m glad I’ve contributed economically, in some little way, by taking this trip.

Back on land I walk over to the charcoal factory, about 500m out of town. It has been around for decades, supplied by the mangrove forests surrounding it. I wander in freely, into its dark smoky chambers, having read about its charcoal making process from a fellow blogger. It feels as if nothing has changed here for the past 100 years.

Now for the return bus journey….. Bus timetables don’t exist in Kuala Sepetang. But fortunately, the bus conductress from this morning advises me to add 1/2 hour to the Taiping timetable (it’s a circular route). By good luck (and experience), I have a photo of said timetable on my phone. And so at about 14:00, I catch the bus, only to get off half way at Matang.

Scrambling out of the lalang (tall grass), where I’ve been deposited by the helpful bus driver who was only trying to drop me closer to the entrance, I wander across to the excellent Matang museum, previously Ngah Ibrahim’s fortress. It’s never too late in the day for a history lesson !!

Ngah Ibrahaim’s father, Long Jaafar, or rather his elephant, discovers tin in Perak in 1848.  Ngah Ibrahim inherits the tin mines from his late father. He builds this fort as protection from the Chinese gangs involved in the Larut Wars, which are described in detail in this museum. Old sketches of the fort suggest that a commercial canal ran down the side of the fort to a tributary of the estuary.

Back at the bus stop round the corner, free of lalang thanks to the two tethered, munching goats, I catch the return bus to Taiping. And so ends day 2 in Taiping. Full of nostalgia, nature and a dose of history, it’s been a wonderful day out, with no sign of that infamous Taiping rain.

You Do Need to Know That….