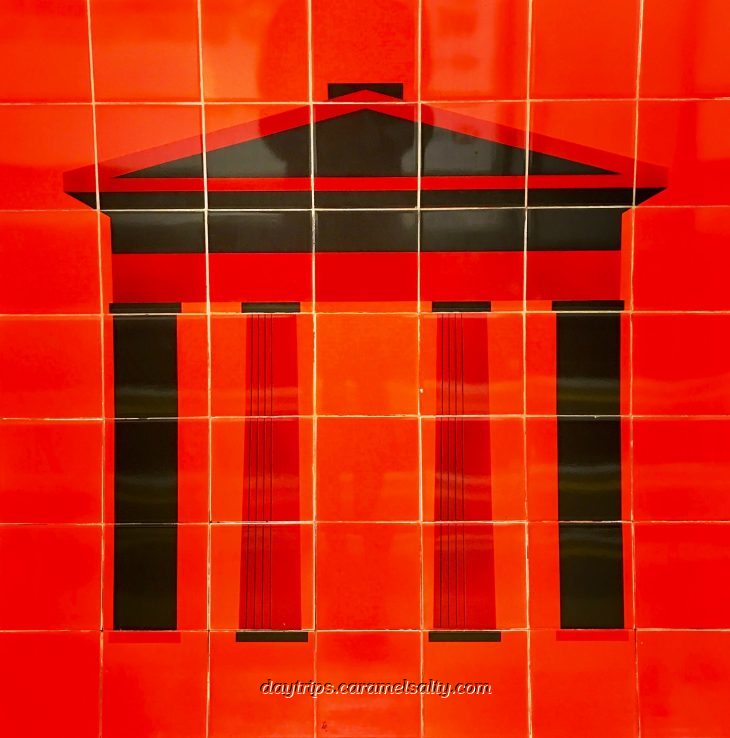 Are train stations only ever associated with travel misery ? Not so I find, when I drop into [1] Euston Station. To my surprise, and delight, just in and around London’s first ever intercity terminus are plenty of stories that could keep the most disgruntled commuter entertained…….

[2] Euston Road‘s original name was “the New Road from Paddington to Islington”. Fortunately, it is renamed when the double platform Euston Station is opened in 1837. Today, the 15 platform station is London’s fifth busiest. And it’ll get even busier when it expands to 21 platforms on the completion of the controversial High Speed 2 train.

Controversy arises in the 1960s over the demolition of the station’s Great Hall (image here) and Arch. Despite strong criticsim from the architectural world, including words like “official apathy” and “philistines”, the station’s portico entrance facing Drummond Street and hall is knocked down. And in its place? The rather grim architecture I see today.

Thanks to Dan Cruickshank’s 15 year search, much of the demolished Euston Arch is discovered in 1994, submerged at Prescott Channel, on the River Lea. The Yorkshire stones are still well preserved. And Londoners live in hope that one day, the ongoing campaign to reinstate the arch will deliver.

The station’s popular watering hole, [3] Euston Taps, is housed in the arch’s two ornate gatehouses. Standing in front of them, I ponder. Could the rebuilding of this arch, a symbol of the new world of train travel, allay the discontent of British train commuters? Possibly not. But it would certainly save the arch from a fate better than a bookend at the [4] Doric Arch.

The 1756 Act of Parliament which approved Euston Road stipulates that no buildings are to be constructed within fifty feet of the road. Which meant that Euston was originally a residential area of houses with long gardens stretching to the main road. Open squares, such as [5] Euston Square Gardens in front of the train station, would have also graced this area.

At [6] 30 Euston Square is a rather impressive Greek revival building. The interior is totally unexpected. The lobby and cafe are tiled in beautiful green and cream Doulton Parian (named after Paros the Greek god). It was built for the Edinburgh, London and Glasgow insurance company. Today it belongs to the Royal College of General Practitioners.

Not only is there a warm cafe in very pleasing surroundings, the building also holds exhibitions. When I visit, the free exhibition reflects individual stories of patients and the medicines they consume. It succeeds in making me aware of the quantity of drugs we take.

On the other side of Euston Square, is an original 1902 LCC [7] Euston fire station built in a “lively interpretation of the Arts and Crafts movement”. The first fire brigades were privately owned by insurance companies set up in the aftermath of the 1666 Great Fire of London. However, as they would only extinguish fires in properties insured by them, the government eventually legislates to make it a public service.

The building restrictions of the 1756 Act were to placate the Duke of Bedford. He feared that Euston Road would blight the value of his nearby property in Bloomsbury, especially as cattle would now be driven along this bypass to Smithfields market. Which meant that the old route of Oxford Street is now cattle-free, much to the delight I’m sure, of the Grosvenors who were developing Mayfair.

[8] St. Pancras New Churchyard, is at the junction of Euston Road and Upper Woburn Place. It’s a little piece of ancient Greece in London, as the 4 replica caryatids supporting the portico were inspired by the Erechteum from the Acropolis of Athens. The unlit torch or empty jug they carry is a symbol that they are the guardians of the dead.

The church promotes itself as a place of worship, and as a space for art and live music. The long flat ceiling inside makes the space look long and deep. The Greek theme continues inside with cream doric columns and Greek temple like altar. An original wooden organ with leaf motifs stands by the altar. And the crypt, accessible from the back of the church, is its exhibition space.

On Euston Road too, I find the [9] Wellcome Collection. This charitable foundation is set up in 1936 from the estate of the American pharmacist, Sir Henry Wellcome‌. His drugs company is now part of Glaxo Smith Kline. But the legacy of this obsessive collector remains for the public to enjoy.

Henry Wellcome’s collection of medical, ethnological and archaeological artefacts ranges from the familiar, like models of early prosthetics, to superstitious medical practices. With self service audio guides and information booklets, I am taken into a world of medical practices so different from the one I receive today.

Feeling peckish, I wonder back to [10] Drummond Street. Drummond Street is truncated when the station is built over it in the 60s. Indian shops and restaurants move in to what is left of it. [11] The Plentiful Foods Indian Spice Store is true to its name. The neatly organised store has every Indian spice and dry ingredient I could wish for. And labels its fresh vegetables with its Urdu equivalent.

It’s gratifying to know that one can still have a good meal in central London for under £10. On Drummond Street, there are plenty of choices of cheap eateries. My favourite, introduced by a friend many moons ago, is [12] Diwana Bhel Poori House, a vegetarian Indian restaurant. It does an extensive, and popular, buffet lunch. And an excellent a la carte.

My final story of Euston Station is back at the [13] statue of Matthew Flinders. Any passing Aussie will know that he is the first circumnavigator of Australia in 1803. Whilst Flinders‘ gravestone is located and removed before Euston station is built over St James’ cemetery, his bones are assumed lost. Until the HS2 excavations dig them up in Jan 2019.

After almost circumnavigating Euston Station on foot, my story ends here, as I return to below the streets of London to go home.

Some Useful Links and Information