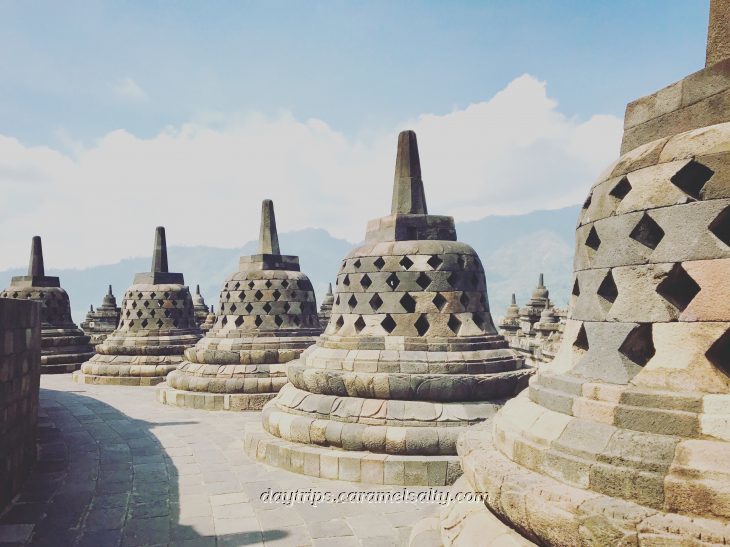 It’s another sunrise start in Yogyakarta as I ease out of my hotel to find a city waking up. Road sweepers are hard at work as I walk past fires being stoked in readiness for another busy day. When I arrive at Jombor station, the locals intuitively point me towards the bus to Borobodur. After all, it’s the only reason for tourists to come here.

A 25 mile bus journey is ample time to enjoy the scenery. And to delve into Java’s colonial past which starts in 1596 when 4 Dutchmen sail into Banten. From this pepper port on Java, the Dutch set up bases and plantations across Indonesia, whilst wrestling control of spice islands from the Portuguese and British.

The Dutch were never really interested in Java, as no spice actually grew here. And that’s pretty obvious from the fertile plains around Borobodur which are covered in solid blocks of bright paddy field green. However constant infighting between local princes and Kings result in the Dutch being drawn into Javanese politics.

For an ex-Dutch colony, it suddenly dawns on me that the bus is driving on the left. This apparent anomaly is a legacy from the brief five year British rule when the Brits successfully invade Java in 1811. It’s a certain Stamford Raffles who persuades the British to seize Dutch territory whilst Holland is overrun by Napoleon’s troops in Europe.

The history lesson is interrupted as I arrive at Borobodur. I’m bemused by the enthusiastic shouting and beckoning that guides the reversing bus into what seems a generous parking space. As for breakfast, that’s sorted by the mouth-watering display of homemade food in the stalls by the terminus.

Across the road, a market is in full swing. The Kedu plain in which Borodbour lies, is also called the garden of Java. It is between two active volcanoes (Sundoro and Merapi) which cover the plain regularly in volcanic ash and lava. It’s this productive agricultural plain that made ancient civilisations consider this a sacred place.

All along the main road, bechaks (trishaws) and horse drawn carriages are available to transport tourists to Indonesia’s most visited sight. I opt for the 10 minute walk from the bus terminal, in the direction of the majestic blue mountains at the end of Jalan Pramudyawardhani.

Borobodur is the world’s largest Buddhist temple. And yet I don’t see it immediately on entering the compound. It’s only when I run over to photograph some adorable Indonesian elephants on the flat lawns surrounding it, that I spy the outline of this complex made up of over 2 million stone blocks, 2,672 relief panels, 504 Buddha statues, 72 stupas and 9 floors.

Ironically if it wasn’t for that invader Stamford Raffles, this ancient monument may never have been discovered for years. When rumours of a large temple lost in the jungles reaches the British Governor’s ears, he sends for the real Indiana Jones in the form of a Dutchman named Cornelius. After 2 months of much tree chopping and earth digging, the ruins are found, buried under layers of earth and volcanic ash.

Borobodur is now a restored Unesco World Heritage site. No one really knows why it was abandoned. Theories include a famine caused by an earthquake in 1006 or the conversion of the population from Hinduism to Islam in the 14th century. Plenty has been written about its history here and here. As well as its role as a pilgrimage for Buddhists.

Alignment to the cardinal points symbolises universal order. Pilgrims enter from the east and circle the temple in a clockwise direction in the Buddhist act of Pradaksina or circumambulating. Steep steps lead to the layers that represent the Buddhist’s interpretation of the cosmos.

The intricate stone reliefs at the lower levels relay the life story and teachings of Buddha. And this blog is an excellent guide to them. Closer inspection of the jigsaw of stones painstakingly put together, show just how much the temple has been ravaged by weather, earthquakes and volcanic eruptions over the last 1000 years.

The central stupa at the very top symbolises Nirvana. This is my favourite level, surrounded by a ring of deceptively peaceful blue volcanoes and the verdant, green Kedu plain stretching out below.

Looking down below, I can only imagine how much more stunning it would have been if the temple had been sat like a lotus in the middle of a blue lake. A far fetched idea? Apparently not, according to some scientists.

My nose almost touches the perforated stupas as I lean in to see if I can spot the Buddha statue contained in every single one of them. I applaud the authorities for deciding to uncover one Buddha at a time for visitors to appreciate.

There are plenty of ledges and corners to spend solitary time marveling the temple and the views. Exit is via the east gate, past an interesting museum and an outdoor cafe serving Javanese coffee. And then I’m channeled through a maze of stalls just outside the complex. Contrary to the spiritual theme of earlier, this now feels like a gentle reintroduction to the world of material goods.

And then its back on the bus again. As it crosses the river Elo, the bus slams its brakes hard when the driver spies two members of the public flailing their arms for a ride. With another two squeezed on, it’s a much busier bus back. But I make a few friends along the way, and am more than happy to help the womenfolk with their heavy loads.

Sitting on the back seat by the open back door does sound precarious by British health and safety standards. But it is thrilling by tourist standards. And lets me video the green plains with something far more precarous in the background – the cloud covered mount Merapi.

And then it’s just matter of watching the world go past the open bus door. As it throttles back to Yogyakarta, scenes of mosques, shophouses, motorbikes (some of them jampacked), bird cages, paddy fields and traffic fly by. And the occasional chipping sound of masons chiselling away.

How to Catch A Bus To Borobodur