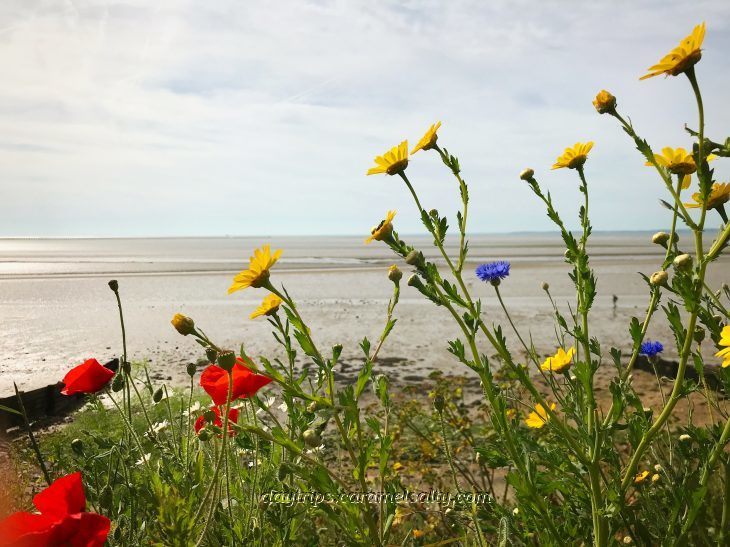 I’m on the aptly named coast to coast train service, heading east out of London in the direction of France. Within an hour, the train runs out of land. It pulls to a stop just past some sidings. As I disembark a screeching gull floating precariously above my head, welcomes me.

I am at [1] Shoeburyness, which lies on the [2] Thames Estuary. The Romans, Saxons and Danes have all disembarked here at one time or the other. Their ancient defensive wooden forts now lie buried somewhere under the sand at Shoeburyness.

There is still a defensive presence here though, with the MOD occupying a site along [3] Pig’s Bay. As I make my way to [4] East Beach, wire fences, locked gates and red signs reinforce a stern message.

But my spirits lift on reading the slogan at the corner shop by the station – “Your Beach Day Starts Here”. Yay! On offer are warm bacon rolls and tea, cold slush at the window and a variety of fun beach apparatus to purchase.

The [2] Thames Estuary, a short walk from [5] Shoeburyness train station, is a busy shipping route today. Across this very wide estuary, in the distant horizon, is not France, but Kent, England.

During WWII and the Cold War, the estuary had to be protected from enemy ships and sneaky submarines from slipping in. This is done with a boom (pillars driven in) across the estuary. Wire nets or ships would also have been used to block the deeper parts of the estuary.

The boom stretches 5.6 miles all the way to Sheerness in Kent. But with the advent of long range missiles and jet bombers, it becomes redundant, so much so, much of it is dismantled in the 1960s. The only part still standing is the [6] Anti Submarine Boom of the Cold War.

The boom is now a scheduled monument. And also clearly marked up on shipping charts as a hazard, given it still sticks out a long way into the estuary. There is strictly no entry past the boom, as MOD property lies on the other side.

Forced to walk back towards London along [4] East Beach, my feet crunch the pebbles on this sandy beach. At the end of [7] East Beach Park, I find a series of eco-friendly beach huts with moss roof and walls insulated with the same sand and pebbles I’ve just been walking on.

I turn into [8] Rampart Terrace, and down [9] Rampart Street. The residential development here is called the [10] The Garrison, because, quite simply, it used to be one. When it is sold to private developers in 2000, strict conditions to preserve the buildings are attached to the lease.

Garrisons were already known at Woolwich Common in London. But as guns are developed to shoot over longer distances, more space is needed for testing and practice. When the Crimean War breaks out in 1854, the garrison at Shoeburyness is established as the artillery testing range for the army and navy.

Wandering around the quiet development, I spot the garrison’s iron gates, the [11] Clock Tower at Horse Shoe Barracks on [12] Chapel Road and the old hospital on [13] Hospital Road and much, much more. The layout of the old garrison can be fathomed out from names still retained such as Mess Drive, Gunnery Hall and the Warrant Officer’s House.

A lot of the space within the garrison has now been filled in with housing. But in a sympathetic fashion. This spacious and historic development backs onto the Thames Estuary, making it very pleasant residences.

As I head back to the coastal path, I pass a square green ringed by shady, mature horse chestnut trees. A memorial stands in the middle of this green to mark when a Sergeant Major tapping a new fuse into position in 1885, is blown up, killing six others too.

From the green I’m forced onto [14] Mess Road as the beach path is no longer passable. The only sea views I can manage is what I glimpse through the glass walled lounges of the huge houses facing the beach. On the other side of the road is a green with mounds thought to be Iron Age or Danish ramparts.

Mess Road opens up to [15] Gunners Park, a gun training spot during the World Wars. It is the perfect park for the war aficionado, as it is littered with war remains. And a stark reminder of Shoeburyness’ strategic location by the estuary.

A useful map at the entrance lists all the pillboxes, gun pits and placements in [15] Gunners Park. Many of these are sealed off because of dilapidation. The largest structure of them all is the Heavy Quick Firing Battery from 1914.

[15] Gunners Park is also the site of ancient civilisations, from Iron Age to Anglo Saxon. Today, wild life is being encouraged to return to Gunners Park, its pond and marshes. As well as on the mudflats that stretch all the way to Foulness.

As I walk along the sea wall, I notice many broken jetties. One such is [16] Gog’s Berth, so named because of the two barges Gog and Magog, that operated from here. [17] Barge Pier is rumoured to be where the first parts of Britain’s atomic bomb landed. To be put together and not dropped by enemy planes, I hasten to add.

From the beach, I can make out a Phoenix concrete caisson in two pieces out in the Thames. It’s part of the imaginatively thought up [18] Mulberry Harbour which are floating offshore harbours built by the Allies off the beaches of Normandy. This particular caisson never makes it to D-Day, as it is abandoned after it starts taking water in.

Right at the very end of Gunners Park is [19] HM Coastguard watching over the estuary and listening in to the air waves. Except that when I walk past, it doesn’t seem to have anybody in it. Is this because much of this can now be done remotely ?

Whatever the reason, it’s a shame no one is in its lofty offices. Because the view over to [20] Thorpe Bay to the west is very jolly. As I exit [15] Gunners Park I am greeted by beaches as far as the eye can see. This is the beginning of the Southend Riviera. And the next chapter of my walk along the Thames Estuary.

How To Do Shoeburyness