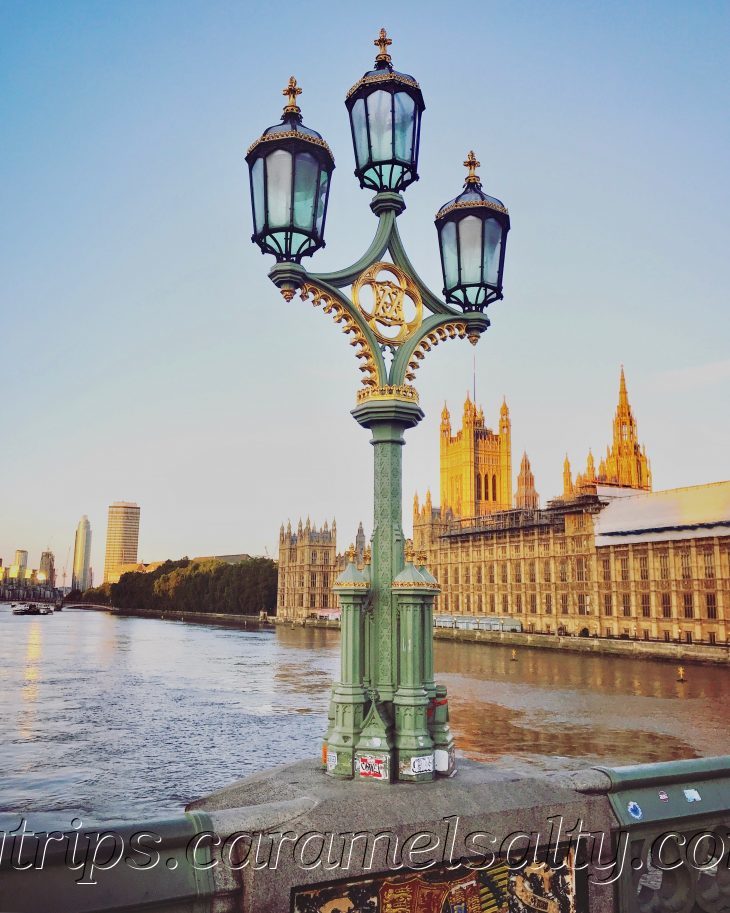 1500 years pass before a second bridge is built over the Thames in central London. Until then, London Bridge is the solitary bridge on this side of town since the Romans. By now, London is the largest city in Europe. More people are settling down in the West End. Children are chanting incessantly that London Bridge could be falling down. All of this spurs the powers-to-be to do something about it.

As I exit towards Westminster Pier, I’m greeted by [1] Big Ben on my right and the [2] statue of the great warrior Queen Boudicca, of the Iceni people. Based down Norfolk way, she led an uprising against the Romans. Stories abound of where these battles were fought, as well as where she was buried after taking poison to avoid capture by the Romans.

[3] Westminster Bridge begins construction in 1739. But these plans are initially thwarted by the City of London Corporation, who levied the tolls on London Bridge. When they bribe Charles II with an interest free loan, he rejects the idea of a second Thames bridge when first mooted in 1664. The unhappy ferrymen fearful of losing their lucrative trade thanks to the overcrowded and taxed London Bridge, also kick up a fuss. For their protestations, they are eventually paid compensation.

The bridge is dogged by bad luck during its build. The Thames freezes over in the extreme winter of 1739, destroying the piling. In 1749, it manages to survive two earthquakes. It’s the subject of a painting by Canaletto (image here). And Wordsworth, in his poem, describes the touching sight of a sleeping city, its towers, domes and ships (full text of Upon Westminster Bridge here). But Canaletto’s and Wordsworth’s bridge is no longer, having been replaced with a newer one.

The current Westminster bridge is painted green to match the colour of the House of Commons in Westminster. I do wander back to the bridge in the afternoon to catch the unfortunate [4] penis shadows formed by the sun rays through the flower design along the side. My vote is that this is accidental, given the effort put into the beautiful Gothic design by Charles Barry.

At the south end of the bridge is a [5] white coade stone lion. One of a pair, it once adorned the Lion Brewery before the brewery had to make way for the Festival of London in 1951. Coade is an artificial stone, whose guarded recipe was created by Mrs Coade, who was never actually married. When she dies in 1821, the secret recipe is lost, until it is finally recreated in recent years. Coade is also extremely durable. Which must have made it harder to remove the lion’s oversized appendages. Apparently from its position on the much lower plinth, it offended polite Victorian society.

I walk down to the very quiet and peaceful [6] South Bank. If this had been after 10:00 a.m. it would have been swarming with tourists. For just by Westminster bridge is the [7] London Aquarium, [8] London Dungeon and the [9] London Eye. The London Eye is Europe’s tallest ferris wheel, and London’s answer to the Eiffel Tower. It features very prominently on the skyline, as well as being the focal point of the annual London New Year fireworks.

The next bridge along is the white steel trussed [10] Hungerford Bridge. This rail bridge is also known as the Charing Cross Bridge. It also has a pedestrian bridge along side it, which makes it one of only three bridges in London that combine a train and pedestrian walkway. The other two are Barnes and Fulham.

I traverse the Hungerford Bridge, accompanied by trains trundling past carefully, making their way into or out of Charing Cross Station. There are actually two pedestrian bridges, each affording different views. First I cross over on the west side, with its fabulous views of Westminster gleaming in the rising sun. I return to the South Bank via the bridge on the east, to be treated to views of St. Paul and the towers of the City of London.

Hungerford Bridge brings me back to the [11] Royal Festival Hall (RFH), surrounded by cafes and restaurants. This is where the British Festival was held, exactly 100 years after the Great Exhibition of 1851 in Hyde Park. The motivation behind this festival was to bring the feel good factor back to Britain after World War II. This grade I listed building was built for the festival. Today it’s home to the London Philharmonic. The whiteness of the building is meant to contrast with the blackened city around it, although it’s now a little less white. But it is incredibly light and airy inside. All the spaces merge. There are no walls, no boundaries.

During the day, the large tracts of glass in the RFH allows light to fill the spaces within. And at night, it lights the river and the darkness outside. The well-lit open spaces here lend itself to a great place to read, write or work. The glass theme affords me a great view into their in-house restaurant, [12] Skylon. The restaurant offers a very reasonable pre theatre menu. And with great views. And in a grand setting.

Climbing the stairs all the way to the 6th Floor, I discover the [13] Western Pavillion bar, with more glass and an outside terrace with views of Big Ben, the beautiful Hungerford Bridge, the river and the London Eye. On departing, I hear the sound of an orchestra instrument warming up from behind a closed door. And when outside, I spot the yellow stairs leading up to its roof top garden and cafe. There are certainly lots of reasons to return to this building later on today.

And so with that, that’s two of the eight central London bridges ticked off. And in one of the busiest tourist spots of London. I do hope its quieter further downstream.

How to Be Entertained at the South Bank