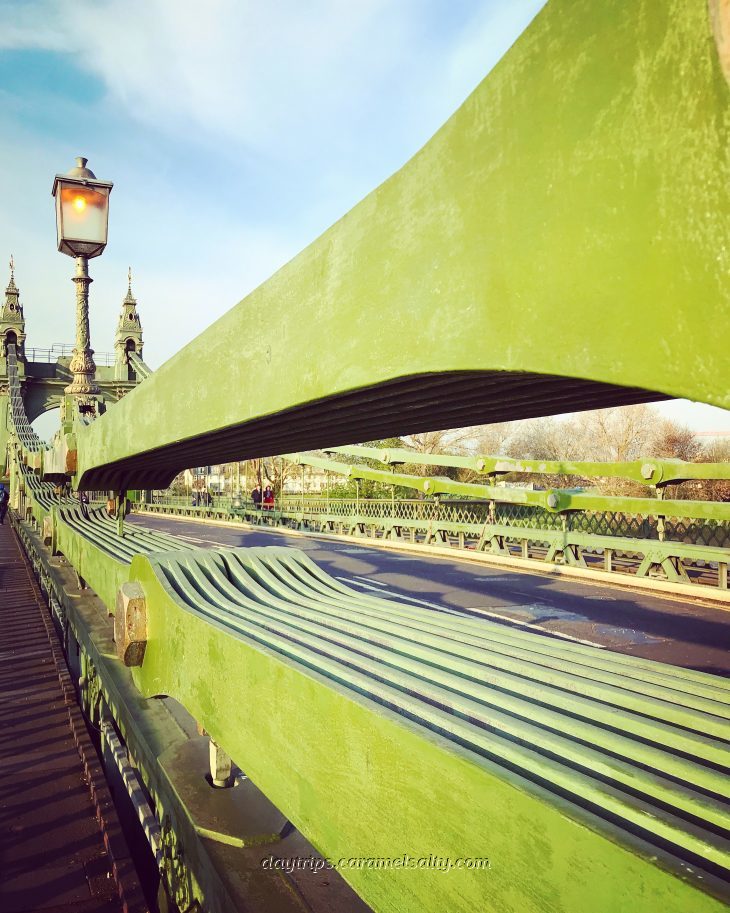 Late one night in 1939, a local worker notices smoke and sparks from a case left on Hammersmith Bridge. He opens it. And then throws it immediately into the river, where it explodes. Had it not been for the actions of this quick thinking man, an IRA bomb would have certainly damaged this ornate, green bridge over the river Thames.

[1] Hammersmith Bridge, built in 1827, is designed by Joseph Bazelgette. This lovely bridge is targeted twice more by the IRA. The last, in 2000, causes enough damage to close the bridge, adding to the numerous other times this bridge is closed, due to damage from today’s heavy traffic.

From the bridge, I descend onto the [2] Thames River Path on the south side of the river. It’s much greener and less built up on the south side. And in spring, there’s the added bonus of banks carpeted with lime green shrubbery and wild flowers

I walk along the wooded Thames path behind [3] St. Paul’s School, where Gustav Holst teaches as a music teacher from 1905 until his death in 1934. When I get to [4] The Swedish School next door, I make a sharp left inland for the [5] Leg O’ Mutton Reservoir.

Had it not been for some determined locals, this reservoir would now be a complex of flats. When the Victorian reservoir is decommissioned in 1960, the community pull together to change the council’s plans. Even the local milkman chips in, by distributing leaflets on his rounds!!

Thanks to the residents of Barnes, this mutton leg shaped lake now holds rafts for birds to nest in. One of its paths runs alongside the Thames Path. And so as I walk it, I also enjoy glimpses of the blue river Thames through the still bare tree branches.

Next door to the Leg O’Mutton Reservoir is the [6] Small Profit Dock Gardens. As fascinating as the name is, I can’t seem to find any history on it. But I do find a fine pair of Egyptian geese wandering about. And some beautiful cherry blossoms in bloom.

I emerge out of Small Profit Dock Gardens to the main road. I have been forewarned to look out for the life size cow on the balcony on the corner of [7] Gerrard Street. It appears that the fad is taking hold, when I spot a life size Storm Trooper a couple of houses down!!

[8] Lonsdale Road takes me towards the heart of Barnes. The walk in gives me some great views of [9] Barnes Railway Bridge. This 1849 bridge is only one of three bridges along the Thames that allow pedestrians and train to travel along the same crossing.

There are some rather handsome buildings along Lonsdale Road. The [10] Bulls Head Pub has some dainty wrought iron balconies. And when I carry on to [11] Terrace Roads, there are more examples of 18th century buildings and pretty balconies.

Whilst sipping a turmeric latte at the [12] BoatHouse Cafe, I look up Barnes’ history. It’s name derives from the Anglo Saxon word for barn. The medieval manor here, Barnes-Elms, is, at one point, home to Francis Walsingham. He is a faithful servant of Elizabeth I, uncovering the Babington plot that condemns Mary, Queen of Scots, to death.

My next stop is [13] Barnes Duck Pond. There used to be four ponds here. And until the 19th century, cows grazed on the green. There are still some notable older buildings around the common, including [14] Millbourne House and the [15] Sun Inn.

Carrying along [16] Church Road, I come across the medieval looking [17] St. Osmund’s Catholic School. Past a charming row of bakers, grocers and florists, I find the Grade II listed [18] St. Mary’s Church, one of the oldest buildings in Barnes. However the only old parts that survive the 1978 fire, are the tower and Norman chapel.

Crossing [19] Castelnau, I arrive at [20] Barnes Wetland Centre, nominated by the BBC as one of the Seven Natural Wonders of the London area. The four Victorian reservoirs are now a bourgeoning oasis for birds, water fowls, voles, otters, water plants and wild flowers.

To best appreciate the enormity of its landscape of lagoons, islets and pastures, the Observatory by the entrance, and the Peacock Tower at the far end of the “wild” section, provide some stupendous views of the reserve.

The highlight for me are the ducks. There are just so many varieties. Helped by the information boards around, I am glad to report that my fowl vocabulary has vastly improved.

The Trust helps protect duck species all over the world, by working with local communities. It’s heartening to know that this reserve, which is so close to the heart of London, enables increasing number of wildlife to thrive here, as reported by the BBC .

Sadly I have to leave the fascinating Wetlands Centre. Continuing along Queen Elizabeth Walk, I am soon back on the Thames Path. About 90 yards down, towards Hammersmith Bridge, I pass the one mile marker of the Head of the River Race. It’s not to be confused with the University Boat Race which also runs the same course, about a fortnight later.

As I head back to Hammersmith Bridge, I pass by [21] Harrods Furniture Depository. This is where men, and families, store their possessions just before leaving for lengthy stints to the various corners of the British Empire. Today it is much more prosaic, having been converted to luxurious flats.

I’m back again at my beloved Hammersmith Bridge. As I cross underneath the very low bridge, it is quite startling to hear how close the rumble of the traffic above is, leaving me in no doubt as to the fragility of the bridge.

As I clamber back up to the bridge I am back amongst traffic and the humdrum of the modern world. Such a world away from the wild, wild, wetlands of Barnes, just a stone throw away.