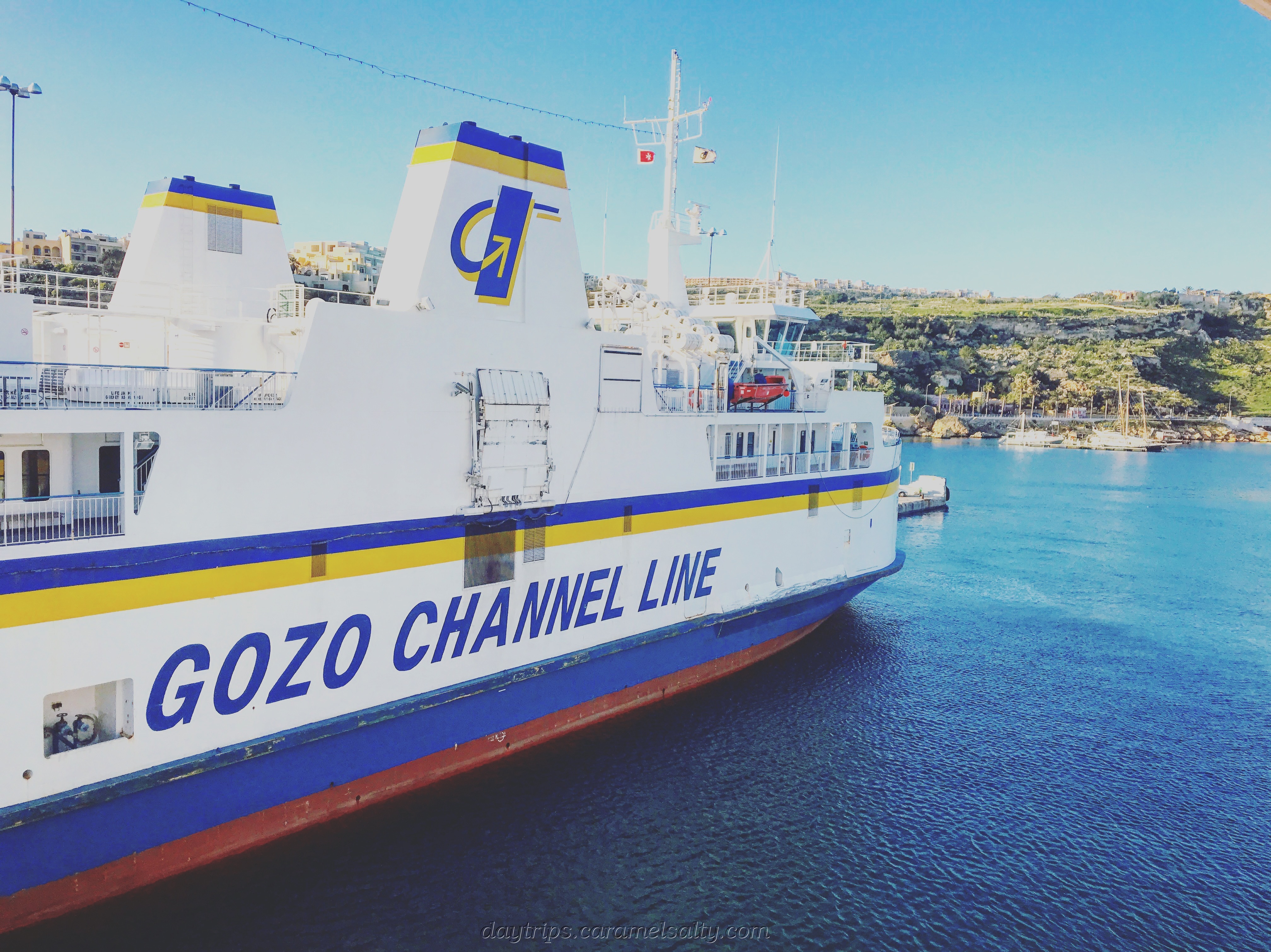 Gozo lies at the northern tip of Malta. This is probably going to be the longest journey by public transport that I undertake in Malta, as it will involve 2 bus journeys and a ferry ride to get to its centre.

The bus to Cirkewwa for the Gozo ferries, goes past the Msida Yacht Marina, which I had walked around on my Sliema walk yesterday (Sliema blog). For the first half hour or so, the bus takes an urban traffic laden route out of Valetta. That is, until we get to Mosta, where my view from the bus window is engulfed by the enormous dome of the [1]Rotunda Catholic Church.

Mosta is still an urban sprawl, albeit slightly less congested than Valetta. But all of that is forgotten when the bus sweeps round the corner of Xemx bus stop to pleasant views of countryside dropping down to a bay in the distance. I am now approaching the affluent area of St Paul’s Bay.

The bus drop off is right by the ferries. It’s a walk on foot passenger service for the [2] Gozo Channel Ferries. I stand the entire 30 minute on the bow of the sun deck as we sail past Comino Island and slip into Gozo’s harbour.

Hopping onto the bus to Victoria, the direct route takes me past 3 impressive churches, the Lourdes Chapel at the harbour, Ghajnsielem Parish Church and St. John the Baptist, whose rotunda dominates the skyline for the rest of the bus journey.  I plan to come back tomorrow for a closer inspection. But for now I head into Victoria.

I head into the plaza with [3] St George’s Basilica. As there is mass in progress, I opt to wander around the [4] narrow streets around the church to pass the time. Streets like these always yield something surprising, yet charming, without fail. And these do not disappoint.

And whilst mooching around these narrow pathways, I get an excellent view of St George’s Basilica peeping through the roofs of the dwellings surrounding it.

Unfortunately it seems to be an extended mass today. So unable to wander in freely and take photos, I choose to breakfast at a café in the square. On the recommendation of the bar man, I have a [5] pea filled (or two) puff pastry. They are delicious. Needless to say, I have more of these calorific, but addictive, snack throughout my stay in Malta.

It’s time for some history now. I walk up to the Cittadella sited aloft of everything on Gozo. There is a useful map on the outside wall of a shop at the bottom of the steep hill up to the Cittadella. My first port of call is the [6] Cittadella Visitor Centre. I’m greeted by a hologram of the mythical nymph Calypso, who, allegedly, ensnared Odysseus for 7 years on this island.

I stroll through virtually all of the [7] streets of the Cittadella whilst tracking down the museums included in the general entry ticket. On this glorious spring day, the Cittadella is awash with spring flowers. Luckily, I had paid attention at the Natural Science Museum, and managed to recognise the common golden chamomile growing everywhere.

In quick succession I visit the following museums-

The Archaeological Museum explains in great lengths that these islands are made up of limestone and clay layers which used to be the bed of the Tethys sea (map here) that existed 250 to 65 million years ago. The sea bed was pushed out above sea, where they continued to be eroded by the weather. There are fossils visible in the stones around me in the Cittadella. But only of marine life, as it came from the seabed.

Before I leave, I walk the [12] walls of the Cittadella. Providing great views of Gozo, the North City Gate is also particularly poignant. In 1551, Gozo is attacked by the Ottoman Empire. The victory gained by the Turks is the precursor to the Great Siege of Malta in 1565. Virtually all of the population in Gozo are captured as slaves. This excludes the 300 or so people who had the brass to scale down these sheer walls to escape. Or in the case of the legend of Bernardo de Opuo tragically narrated here, he saves his family from a fate worse than death.

Last but not least is the [13] Gozo Cathedral. Standing tall and proud in the main square, it’s another church that dominates the skyline, even from the ferry. So I say goodbye to this fascinating Cittadella, which, a long time ago housed the entire population of Gozo. After the 1551 attack, everyone had to live within the walls of the Cittadella overnight. The curfew was only lifted in 1637. Today, hardly anyone lives within the walls.

So that’s my morning in Gozo. I look forward to this afternoon’s adventures which will take me away from Gozo’s capital, in seek of sea, salt and temples.