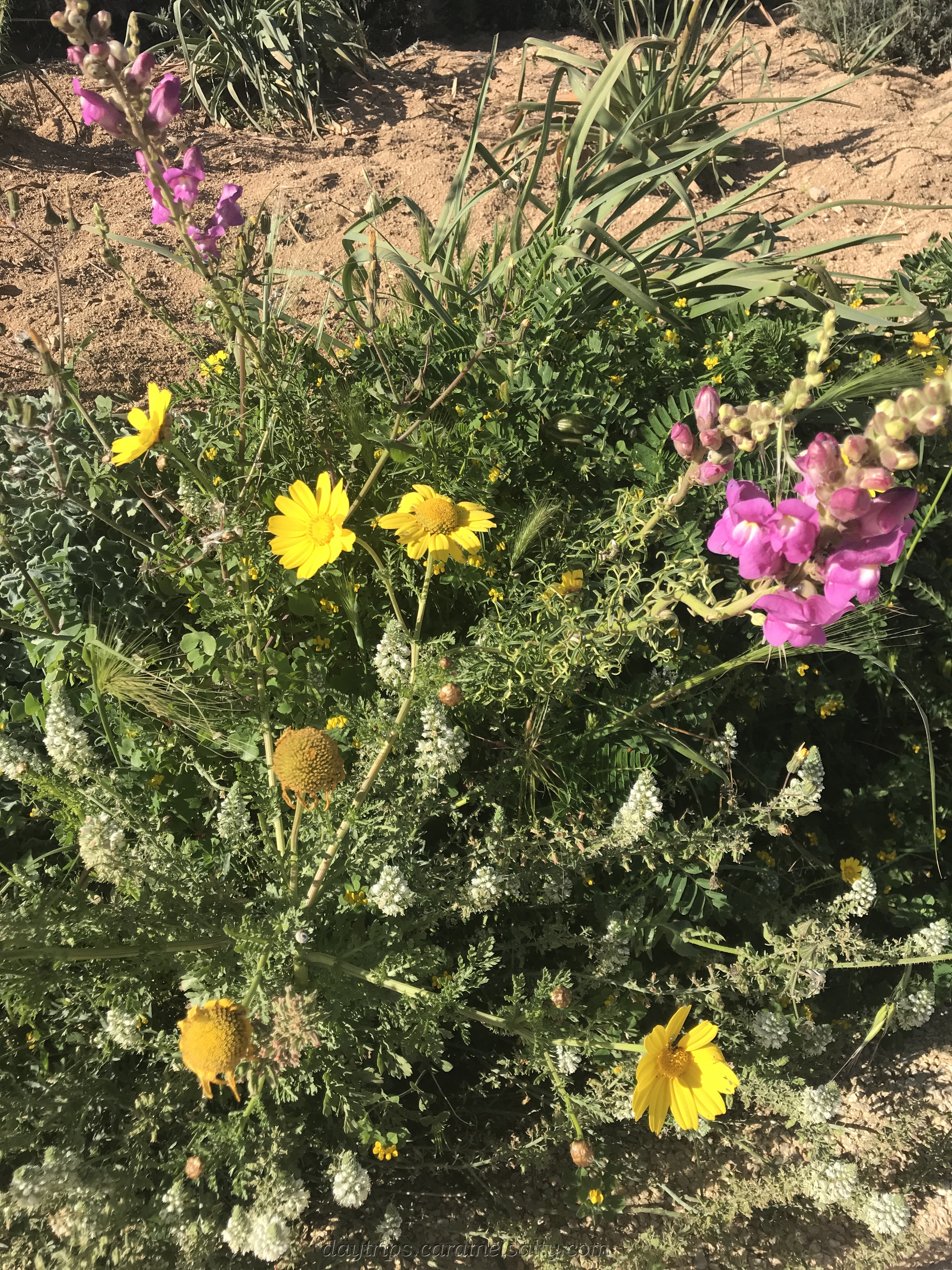 Having spent the morning at the Cittadella in Gozo (Cittadella blog here), I am raring to explore other parts of this green and pastoral island this afternoon.

I head to Marsalforn this afternoon. Chatting to the 4 Lithuanian backpackers squeezed in with me in the back row, I realise that it’s a well known beach resort. So when I tumble out of the bus at Marsalforn, I ignore the hills and head straight for the water.

It would appear that Marsalforn is a very popular tourist resort, as borne out by the rows of hotels and apartment blocks surrounding [1] Marsalforn Bay. So I head in the opposite direction of the high rise buildings. Marsalforn Bay is beautiful, so much so that benches have been installed in the seaweed covered rocks for some solitary contemplation.

Eventually, my path along the bay peters out and I have to clamber up some stairs to the main road, to climb the headland. The advantage of this, ofcourse, is that I get some tremendous views of the bay that I’m leaving behind.

I soon arrive at a promenade running along the cliff. It must get very windy up here at times, I surmise, when I come across a tree growing at almost 45 degrees.

I follow the promenade around until that runs out too. At the end of the promenade, down on the beach below, I find some salt pans. However, I don’t think that these are the ones that I’m looking for. So I carry on.

This is now the most featureless section of my walk. It looks like a little holiday resort, built around [2] Qbajjar Bay. Quite characterless indeed. But once past this little group of village, an interesting rock structure emerges ahead of me. I suspect things are going to get better.

I’m in Gozo, and therefore, as sure as night follows day, one bay follows another. I’m now at [3] Xwenji Bay. The walk is beginning to take on an air of expectancy as I leave resorts and tourists behind. As I walk around Xwenji Bay, I enjoy stunning views across the bay, back to the rock structure.

As the road reaches a bend around a piece of jutting rock, I notice some [4] abodes dug into these limestone cliffs. I can’t judge how old they are, but they certainly have relatively new wooden doors keeping them shut.

As I walk along the bay, I come across a bunch of cycling school kids, divers preparing to head out to a wreck, and a pair of swimmers larking about in the shallow bay. That’s it. Compared to Marsalforn Bay, this is a much quieter and remote bay.

When I go round the corner, I finally find what it is I’m looking for. Along the sea is a large patchwork of [5] salt pans in an extraordinary landscape reminiscent of the surface of the moon. Yes! I have found the salt !

It’s obvious that these are working salt pans, as there are signs stating that the salt pans are out of bounds. And voila, up some steps, in the cliffs above, is a tiny [6] salt shop run by Mr Cini and his charming wife who keeps him company, crocheting by his side. A lovely old couple. Naturally I purchase some Gozo salt from the Cini’s.

I wander back to Marsalforn, where I lunch quickly at one of the many touristy, and very average restaurants. Nevertheless, most of the eateries here have great terraces or tables along the pavements. After my late lunch, I jump on the bus back to Victoria. And then onto another bus out to Xaghra.

It’s a busy, busy bus to Xaghra as it coincides with the end of school. After 20 minutes, or so, of synchronised swaying by school children and tourists alike, I get off at the Ggantija bus stop for the [7] Ggantija Temples, the most impressive of the megalithic temples in the Maltese islands.

The temple complex, a short walk from the bus stop, was built during the Neolithic period. It’s older than even Stonehenge and the pyramids of Egypt. And the reason it’s still standing is down to the Gozo coralline limestone used to build it. Amazing stuff!!

From this ancient temple, I gaze across its strategic position over the valley leading to Ramla, to another temple, St John the Baptist. I must come back tomorrow to visit this church.

And with that thought, I catch the bus back to the ferry. I board the bus on the mainland, looking forward to my roller coaster ride down to Valetta. The first half of the journey back to Valetta is one of the most picturesque bus journeys in Malta. First I pass [8] The Red Tower, as the bus ascends the slope from Batterija bus stop.

And then at the crest of the roundabout at Qammieh bus stop, I spy through the front window of the bus, the plunging drop down to [9] Mellihia Bay. This is the area where, allegedly, St. Paul is shipwrecked. He stays in Malta for 3 months and converts Malta, a Roman colony, to Christianity. Which is quite ironic, as he was actually on his way to Rome to be tried for the very same offence.

Following closely behind Mellihia Bay, is the [10] Mellihia Parish Church. It’s another catch my breath, splendid church which I have to crane my neck to appreciate, given its elevated position.

Finally I come to the last of the bays for the day as the bus circles [11] Xemxija Bay, the closest point to St. Paul’s Islands. With boats bobbing in the bay, inviting restaurants fringing the bay, a little beach filled with sun seekers, this is quite an appealing place.

The bus climbs the hill to Mosta, and then descends, literally, into urban Malta all the way back to Valetta. It has been a long day at Gozo, but I am baying for more, and will return.

One thought on “Malta – Marsalforn and the Ggantija Temples, Gozo”