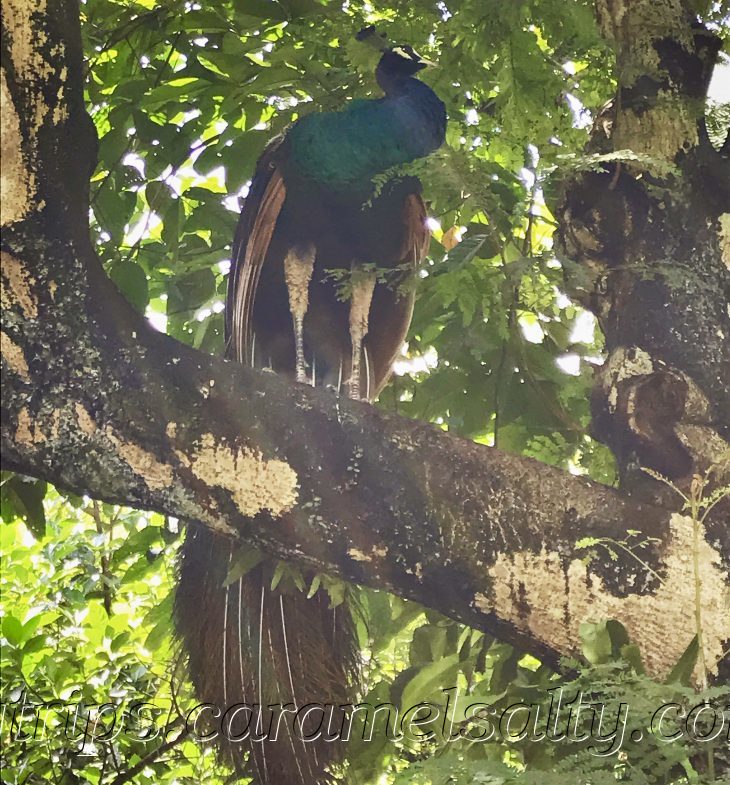 It’s early morning at my local train platform. As I wait, I hear the “cuc-koooo” call of the spotted turtle doves (image here). Or so I think, until I’m corrected by Wikipedia which categorically confirms that the turtle doves go “krukkroo – kroooo”. This common Asian bird is obviously less anglicised than I initially thought. And so begins my interaction with tropical birds as I head towards the largest walk-in aviary of the world, the [1] Kuala Lumpur Bird Park.

Much of the 150 acre [1] Kuala Lumpur Bird Park is covered in netting, that stretches high into the sky. The handful of common pigeons scouring for food have obviously snuck in through a gap somewhere. As have the pair of monkeys stealthily making their away over the ostrich shed towards the bird feed. Zebra doves (image here), turtle doves, imperial pigeons (Image here), blue and green Indian peacocks and the more subdued brown peahens wander around, semi-oblivious to visitors.  And amongst these birds, I spot a beauty. A photographic but camera-shy crested pigeon seeking anonymity amongst the shrubs.

The park is split into four zones. The entrance/exit between the various sections of the park is secured with heavy chain curtains, stiff hinged doors, wooden walls and netted ceilings. All necessary steps to ensure that visitors can’t escape until they’ve covered every part of the park. I jest! There is no need for escape for man, or for bird for that matter. The park is very charming, set against a hill-side with paths winding around the slopes. Cages are large and airy. Some avians are even allowed to wander around freely.

Whilst the peacocks are not in the mood to display their iridescent tails for me, the colourful Indian Ring-Necked Parakeets do engage in some synchronised flying from one end of their cage to the other. There are over 200 bird species here, and therefore impossible to cover them all in a short blog. But it’s safe to say that there is no shortage of memorable scenes of these winged species.

One  “wow” moment for me is a pond en route from Zone One to Zone Two. Crowded with feeding yellow-billed storks, they are so closely packed that there is an incessant clatter of beaks as they snap at fish in the water. Sometimes their beaks clash with each other as they go after the same fish. Any stork that successfully grabs a fish in its great big yellow beak, has to get away immediately or risk getting involved in a beak fight over the fish. The successful hunter becomes the hunted …….  a mesmerizing show to watch.

It wasn’t possible for me to spot every bird listed on the information boards despite staring intently into the dark, shady foliage for signs of feathery movements. However, counting on some of the more elusive ones to get hungry at some point, I hover around the bird feeds found at various points around the park. I manage to identify a few more birds. However when I get to the ibis section, I am determined to not leave until I find the never-seen-before-in-my-life, scarlet Ibis.

At the Flamingo Pond, the elegant pink flamingoes make a pretty display. So do the bulbuls, the love birds and the Oriental birds. The herons, whose nests are high up on trees, guard and feed their very noisy youngsters. Occasionally one parent flies away, perhaps for a break. I’m not surprised. The din emanating from the their family nests of twigs and branches is rather boisterous !!

The ultimate highlight for me are the amazing Hornbills. In their double storey cage, one perches close enough for me to admire that incredible beak. The piece on top is called a casque. It looks a terribly heavy beak. Which is why, according to Wikipedia, the hornbills are the only birds in the world whose first and second vertebrae are fused together, so as to support that weight.

The wooden [2] Hornbill Restaurant terrace that overlooks the hornbills, is the perfect setting for lunch. I enjoy a sour lime drink, whilst scanning the park to remind myself of all the birds I’ve just seen. As for lunch, I opt for a dish from the land of the hornbills.

It’s the [3] Orchid and Hibiscus Garden next, across the road from the bird park. My verdict – it’s rather disappointing, with very little labelling or signage. There are plenty of orchid plants around, planted in neat rows in formal beds in this small garden. But not many of them are actually flowering. And I would have expected to have seen plenty of hanging ones too.

The orchid park leads to the hibiscus (bunga raya) section. I read that the bunga raya is easy to grow, requiring little maintenance. Which does not explain the lack of huge, abundant, flowering bunga raya plants here. There is one redeeming feature though. The hilltop position of this park affords views of the trees of the Lake Gardens below. In fact that was my real treat, standing under those trees when the heavens open, noting that it takes a full ten minutes before the first rain drop snakes its way down the thick foliage to form a steady drip on my umbrella.

All is not lost, when I spot some lovely allamanda specimens, a native of the Americas, as I depart the hibiscus section. However, my day is far from over. It’s now a light drizzle as I wander down the hill. Which lends itself perfectly for exploring the complex of museums around the Lake Gardens this rainy afternoon in Kuala Lumpur.

Other Places to Visit Nearby  – Kuala Lumpur’s Lake Gardens, A Browse Around Brickfields