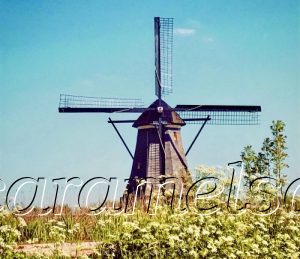 Should I be nervous knowing that only a dyke protects me from a salty swim? Everyone knows that the Kinderdijk, like much of the Netherlands, lies below sea level. After all, “Nether” means the lowlands. But was it always this low?

If this was the 15th century, I’d be waiting for a boat in a place called the Low Countries. This was how the 17 provinces of the Duchy of Burgundy (modern-day Netherlands and Belgium) were referred to then.

When the Romans invade this area two millennia ago, the land was much higher. It was swampy though, as after all, this is the delta through which the River Rhine winds its way through multiple distributaries towards the North Sea.

If I go back a few more millennia to when the ice age ended, peat and water-loving fauna, such as moss, start accumulating in this wet marshland. It forms a soft, fertile, waterlogged layer above sea level.

My story is interrupted as I arrive at Ridderkerk to swap onto the [2] Driehoksveer ferry. It’s rather refreshing to board something that isn’t the efficient and punctual Dutch public transport system. The ferry kind of departs around 10:30ish. Only cash is accepted for tickets.

Back to the story of the polder…..People begin to farm. By the 1300’s, the earls of Holland and the bishops of Utrecht have handed out much of their lands to wealthy farmer landlords. With all trees eventually cleared, peat becomes a popular source of fuel.

The ferry drops me off at the entrance of [3] Kinderdijk, a Unesco World Heritage Sight and a very popular tourist destination. I walk away from the hordes, along the peaty banks of the dykes. The land beneath my feet is generally oxygen free, which is why peat stays in its decomposed state for many years.

Cultivation and digging, on the other hand, introduces oxygen to the land. And just like the organic matter in my composter at home, as it rots in its oxygenated environment, the mass reduces. The Netherlands begins to sink.

Inner parts of the Netherlands drop below sea level. These are known as polders. However, up until the 16th century, the capability to drain water on a large scale from the polders does not exist.

It’s not surprising therefore, that in November 1421, a terrible storm wreaks havoc for the city of Dordrecht nearby. Vast areas of polders disappear underwater for decades. When I visit Dordrecht (my Dordrecht blog), I learn just how devastating this was for the city.

With the advent of the Dutch Golden Age in the 17th century, wealth and technology results in the start of large-scale construction of windmills for pumping water from these polders. This reduces the risk of floods and further erosion of much-needed arable land.

There is a formidable network of sand dunes, dikes, ditches, dams, canals and windmills that prevents the Netherlands from flooding. At the Kinderdijk, I get the chance to see how the windmills contribute towards this.

To escape from the masses, I head to the [4] Museummolen Blokweer, which is the furthest away from the entrance. This museum explains how windmills, ditches and sluices draw water from the polders into the River Lek which lies above the polders.

Windmills also double up as living quarters. Many of the windmills in the Kinderdijk are still occupied today. From a distance I can see washing hanging out and people going about their day-to-day.

Any water lover would enjoy the Netherlands. There are so many ditches and canals around, that nearly every Dutch household seems to possess a water vehicle of some kind. At the Kinderdijk, I relish the chance of walking between the ditches that I often see from my trains and bus journeys.

As for the birds, they absolutely thrive in this environment. Ducks, geese, coots, swans, herons and grebes make this place their home. I enjoy the sound of birds having fun in the water and the smell of nearby farms.

Dutch history is littered with many destructive floods. The storms of 1280 and 1362 create new seas in the Netherlands. The one in 1703 is quite epic. After the 1953 storms, where 1800 people perish, the Dutch start to take flood defences to heart.

I bravely head back to the [5] Museummolen Nederwaard near the entrance. Time starved package tourists make a beeline for this museum during their short stopover. At this windmill, I’m introduced to a Dutch family of 12 children who once lived in this tall, narrow, building.

I get a first-hand experience of how cramped the living quarters are, thanks to the scores of tourists trying to squeeze into the little chambers across two floors. Fortunately, I get some respite when they are recalled back to their luxurious and spacious cruise ship moored up on the Lek.

However one fellow tourist does make an astute observation. The blades outside are so close to the window. With sails on, they must sweep past loudly. And the enormous, square, heavy wooden column inside must groan and creak terribly as it twists with the rotation.

The best way to appreciate anything so vast is always from the outside. So I make my way out to the main road. I climb onto the [5] dyke that separates the River Lek from the polders of the Kinderdijk.

From my vantage position, I can see the entire complex of windmills at the Kinderdijk. At one point I thought I could count 20. An overcount on my part, as their website states that there are only 19 !! Suffice to say that there are a lot of windmills in the vicnity.

And so I return to Rotterdam on the river again. The story of water in the Netherlands is fascinating. Today I’ve seen how the Dutch extract water out from the polders. But there have been times when water has been deliberately pumped back into the polders, a story that will take me to Schoonhoven.