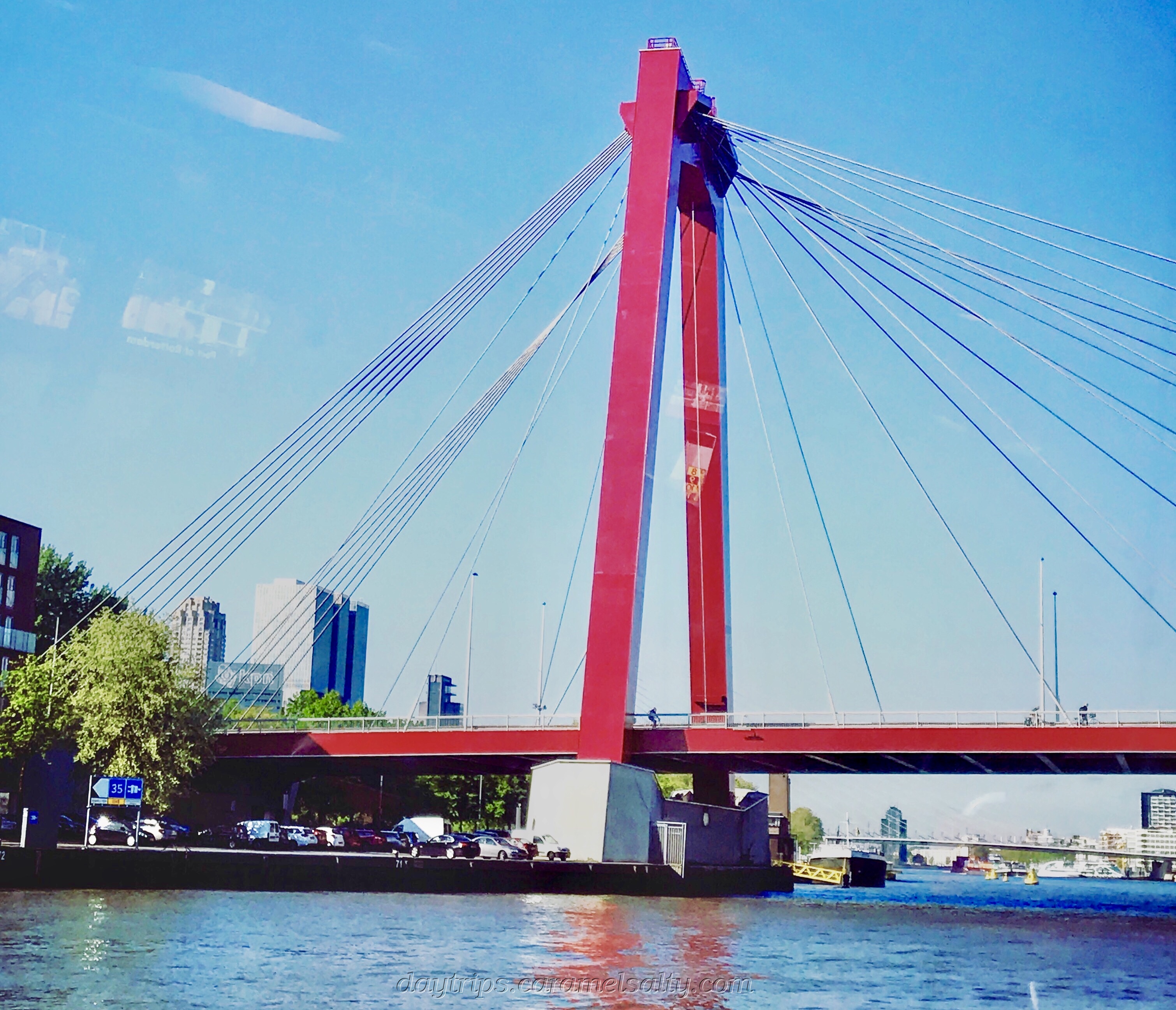 It’s the 18th of November 1421. A heavy storm from the North Sea lashes Holland. Dykes collapse all around. Hamlets and villages surrounding Dordrecht disappear under water for good. When the storm dissipates, the citizens are shocked to find that they are now living on an island in an inland sea. This is a disaster for the city of Dordrecht.

I think it’s only fitting to [1] catch a ferry to a city that suddenly finds itself an island almost 600 years ago on the feast day of St. Elizabeth of Hungary. As I stand by the fabulous white modern Erasmus Bridge, and stare across at the impressive glass towers of the Kop van Zuid on the other side of the river, it feels like being in downtown Manhattan.

The ferry journey out of Rotterdam goes under and past many of its bridges across the waterways that once used to be the nerve centre of Rotterdam’s harbour. Today that nerve centre lies 20 miles away, jutting out on relaimed land into the North Sea.

On the ferry, I spend the first half hour skimming across the Nieuwe Maas, taking in the interspersing views of an industrial port, residences backing onto the river and modern flat blocks on brown field sites.

The ferry approaches the windmills of the Kinderdijk which I visit tomorrow. This is where the rivers Noord and Lek merge to feed the Nieuwe Maas. The ferry continues down the Noord to Dordrecht. The Noord meets the Oude Maas and the Beneden Merwede. And through this mass of water, I sail into the Merwekade ferry terminal at Dordrecht.

I may only have spent an hour getting to Dordrecht, but to start my story of Dordrecht I go back 1000 years in time, to 1049. The bishops of Utrecht, Liege and Metz are plotting. They ambush and kill Dirk the IV, the Count of Holland (why was Dirk murdered?) near a city called Thuredrecht. This is the Dordrecht of today.

In 1220, Dordrecht becomes the 12th city in modern Netherlands to be granted city rights. As it is located at the confluence of at least 3 rivers, Dordrecht becomes an important trading post.  The Staple right (1229) and the Massright (1338) ensures local and overseas goods are offered for sale in Dordrecht first.

As I walk from the ferry terminal towards where Dordrecht’s old harbour would have been, I find it more residential than commercial today. Instead of warehouses, handsome houses, restaurants and bars now line the waterfront. Ferries, not ships, visit this city today.

Dordrecht’s port activities start to taper in the 18th century as Rotterdam starts to rise in importance. However this isn’t the most drastic change that Dordrecht has ever faced. The most dramatic of change happens overnight back in the 14th century, during Dordrecht’s Golden Age.

As the Dordtenarens prepare for the feast of St Elizabeth, dark clouds gather in the North Sea. The storm lashes down for 2 days and 2 nights. People and animal drown. The sodden polders are submerged, transforming Dordrecht into an inland island.

In an instant, the Storm  of St Elizabeth puts an end to Dordrecht’s Golden Age. Ships are now able to bypass Dordrecht. Its status as a port declines. Dordrecht also ceases to be the capital of Holland.

As I approach the city via its marina I come across yet another ancient monument, the [2] Grote Kerk. An 11th century Romanesque church had previously stood on the same spot. It’s replaced by this Gothic version in the 12th century.

Church towers are a symbol of a city’s wealth and importance. But many turn out looking rather stumpy and short, either because the city runs out of money or the tall spire they stick at the top collapses from lightning strikes, fires or one of the many gunpowder explosions I’ve come across in my voyage across the Netherlands.

For the affluent port of Dordrecht , it wasn’t money that was the issue. It is subsidence that causes the tower to start leaning and puts an end to its lofty plans.

I head into the city centre along [3] Grotekerksbuurt. Given the street’s name, it’s no surprise that as I look back, I’m treated to wonderful views of the Grote Kerk.

Grotekerksbuurt turns into Groenmarkt which runs alongside some canals. The next pretty building I spy is the historical [4] City Hall of Drodrecht. Originally built in 1383 as a cloth hall, by all accounts the interior is also worth visiting, if one happens to be there on the first Sunday of any month.

It is a must-do to traverse [5] every bridge over the pretty canals of Dordrecht. Despite the extensive damage suffered by Dordrecht during World War II, there is still a slight semblance to the pre-war canals shown in these old sketches I come across.

My final destination this trip is [6] het Hof. Originally an Augustinian monastery (1275), it loses its religious function in 1572. This is when a meeting is held here, between William of Orange and 7 of the 17 Provinces of Burgundian Netherlands. The meeting has to be held in the utmost secrecy as only the King of Spain is allowed to call a State meeting.

The 7 provinces unite behind William in his war against the Catholic Prince Phillip the II of Spain, ruler of Burgundian Holland. In 1648, the Dutch finally gain their independence from Spain. But I’ve a feeling that this is not the last time that the ancient city of Dordrecht has an impact on the history of the Netherlands. It will take another visit to see if this is the case.