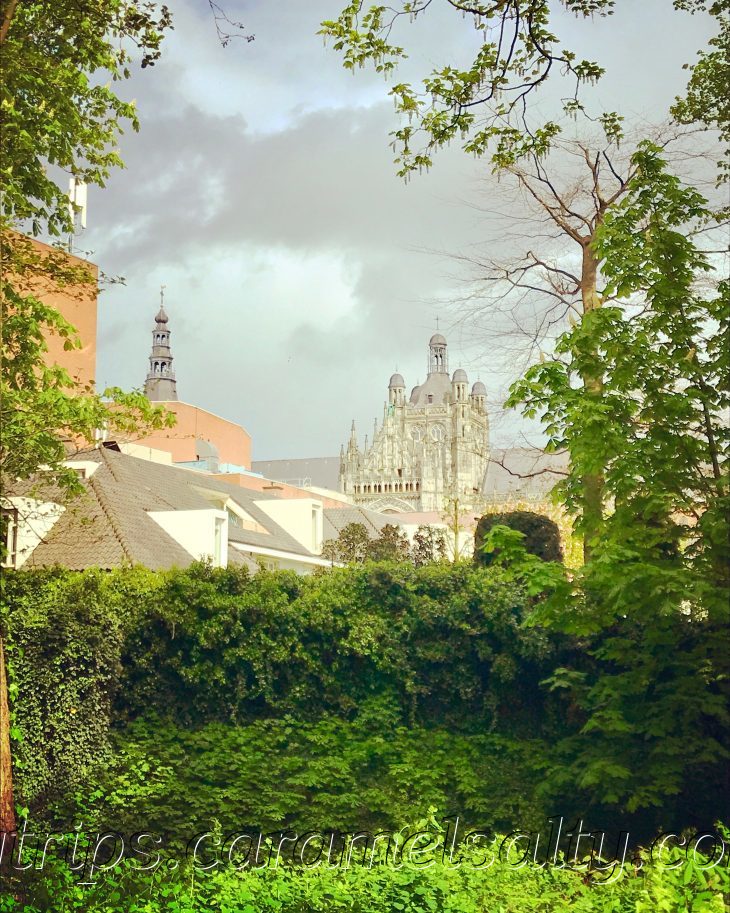 Naked bodies frolic around the garden. Oversized fish lay scattered about on the ground. A naked woman carries a gigantic mussel shell on her back. Inside it is an equally naked man. A man lying on the grass, has a blueberry for his head. I quietly study each and every one. They are oblivious to everything around them as they succumb to temptation. So this is Bosch, I think. Worth every penny coming out here to see this spectacle.

The day starts normally enough. The 40 minute journey to den Bosch is of typical Dutch scenes, flat farm land, occasional herds of cows grazing, spring time daffodils in cheery yellow along banks and canals. All very pleasant as I whizz towards the highlight of my train journey, the river Waal, one of the three main tributaries of the mighty river Rhine flowing to the North Sea.

The name Waal comes from the German word meaning crooked, in reference to the meandering river’s many bends. Bends which now have been straightened for the convenience of shipping. If I had been on a drifting boat heading downstream, I would eventually spill out into the North Sea via the huge port of Rotterdam.

I may regret this phrase, but if only every morning could start with a chocolate coated ball for my pleasure. A large one made out of choux pastry, filled with whipping cream and then dipped completely in chocolate. And if you wish hard enough, your dreams come true they say. Between the train station and the city is the bakery [1] Jan de Groot Bosschebollen. Some may call it calorific, I just call it terrific, as I breakfast on the famous bosschebollen of den Bosch  (recipe here) surrounded by cakes of all shapes and sizes.

I cross the [2] river Dommel to enter the city built by Henry I, Duke of Brabant (1183-1235). The Duchy of Brabant (1190-1407) doesn’t exist today. But when it did, it was in the area in between the river Scheldt and the River Rhine. His Duchiness, Henry the I, eager for more territory, expands North, forcing the Counts of Gelders and Holland to retreat. He then builds den Bosch in some forested dunes, to protect his lands from being re-seized by them.

The Duchy of Brabant passes to the House of Habsburg in 1407 through marriage. And so control of the Duchy passes to the Spanish King, Phillip the II. In 1556, modern Netherlands and Belgium are being ruled by Catholic Spain, when two events happen to change the course of history in the Netherlands. The Reformation, otherwise known as the Protestant movement and the 80 Year War that William of Orange wages. More of this in my blog on Delft.

The 80 year war with Spain eventually results in an independent Protestant Holland in 1648. But during the war, territory is won, and lost, and then won again between both sides. In 1625 den Bosch is retaken by the Habsburgs. And so in 1629, the Dutch stadtholder, Frederick Henry, lays a siege. One that is painstakingly planned.

Frederick Henry diverts the rivers Dommel and Aa around the castle, like a moat. Using mills powered by horses he drains what is effectively a great big polder. People come from all over to admire his method. As the land dries out, Henry’s army advance towards den Bosch. Four and half months later the city falls to the stadtholder.

I make my way to the centre of den Bosch, going past gabled houses and shops alongside cobbled streets. The [3] Town Hall comes into view, and with it, the [4] city square. Setting up in the early morning drizzle, are stalls of cheese, fish snacks and flowers, the stalwart stalls that define all Dutch squares.

The city of den Bosch has a huge open square. When I visit the Noord Brabant Museum later in the day, I spot a 17th century painting of the square. And in it, I spot the little shrine of the Madonna on the end of a column, just as it is today. Amazing to think that this square has hardly changed over the last 500 years.

The large [5] Sint Janskathedraal beckons. I can tell it’s a huge cathedral just by wandering around the outside of its grand gothic architecture. Building starts in the 14th century, and it only becomes a Catholic cathedral in 1559. A little glass peephole just above me in the entrance door, allows me a sneak preview. I stand on tip toes, and catch my breath. I think I’m just about to walk into the most beautiful cathedral in the Netherlands.

Just like all the other cathedrals in the Netherlands, statues and art were destroyed and their interiors painted white during the Beeldenstorm (iconoclasm) which spread across Holland in 1566. But unlike the others, this church retains its majestic tall stained glass windows, beautifully  painted ceilings and angel sculptures. Its sheer size is breathtaking and is best appreciated by standing at either end and simply looking down the long aisle. I find a detailed list of its structures and features to guide me round the church.

Time for some aimless wandering, which is one of the best ways to appreciate den Bosch. Walking past the [7] Theatre I spot a sculpture of a Spanish matador. But the bull is not all it seems. It’s half beast, half man. Things are beginning to get a little surreal.

Then I walk down [8] Cavaleriestraat to a sculpture park, with wonderful views of the cathedral beyond the trees in the park. This time I spot a giraffe. Or is it? It has two ice cream cone-shaped horns. So I’m not sure what that makes it. A giraficorn?

I arrive at the city walls in the south, by [9] Zuiderpark. Den Bosch is one of the largest walled cities in the Netherlands and they are well-preserved. But I am distracted, as there is an oversized garden gnome fishing by the river and a man floating in a bucket gesturing for help.

Little do I realise it now, but the scene is being set for my encounter with the most famous son of den Bosch later this afternoon.

How to Do What I did