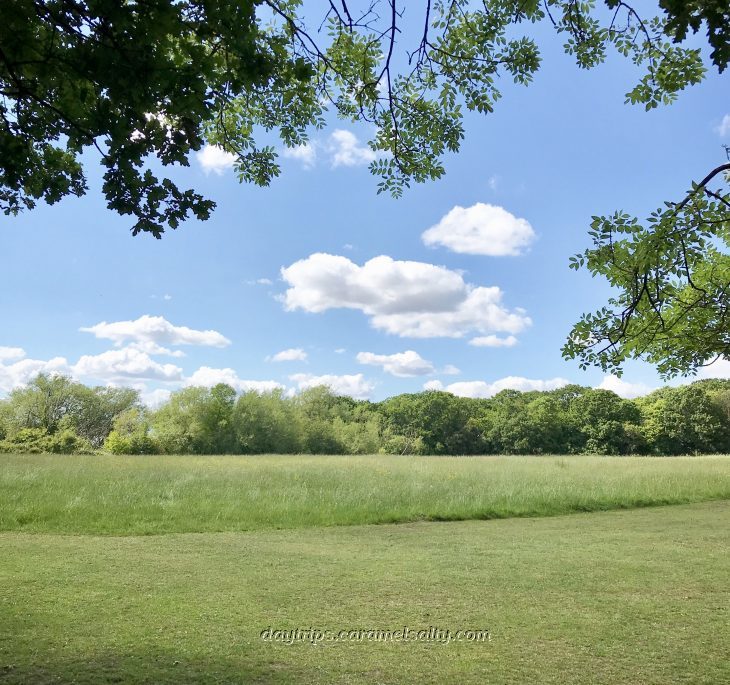 The first royal born at Eltham Palace in 1316 is John of Eltham, the second son of Edward II and Queen Isabella. From then, and until the Tudor Henry VII, Eltham Palace remains popular with the royal family. But under Henry VIII, the palace falls out of favour, and eventually into ruins. Until a super wealthy American family looking for an English nest, saves it from obscurity…..

To start my walk, I walk through an iron gate into [1] the Tarn Bird Sanctuary, just yards away from [2] Mottingham Station. It’s only a small park, but beautifully landscaped. And lovingly maintained by the park’s gardeners, who this morning, outnumber the sole visitor in the park by four to one.

The star of the park are the birds, who, by a mile, outnumber all of us in the park. A noisy coot chick clambers out of the tarn with her very patient mum in tow. And I get to engage in a staring competition into the unblinking eyes of one of the many greylag ducks around.

Around the small pond are azaleas in bloom, clumps of yellow irises and lime green willows. The pond used to be owned by the golf club next door when it was a manor. The servants used to chip the frozen pond for ice shards, storing them in the icehouse which still stands by the park’s entrance.

Nearby is [3] King John Playing Fields, on which horses graze. At the end of the trail through the fields, is a grassy paddock. It’s home to a few adorable, but scruffy adult donkeys, and a baby foal running amok on her spindly newly born legs.

The friendly donkeys march towards me, falling into a straight line as they do so. It must be a habit they can’t shake off from when they used to provide rides at Blackheath. I’m able to address the donkeys by name, as they are listed on a whiteboard on the fence. How very thoughtful of their owner.

I wave goodbye to the donkeys as I turn right onto [4] King John’s Walk, an ancient track from [5] Eltham Palace to the enclosed royal parks to the south. It sits on a ridge, providing the hunting party with stunning views of London, which at the time of John of Eltham after whom it is named, would have been very different.

Fields give way to converted Tudor properties. A moat and a grand stone bridge come into view. Followed by [5] Eltham Palace. It’s last owners are Stephen and Virginia Courtauld. They may not be royalty, but they are very wealthy indeed on the back of the Courtauld rayon empire.

When the Courtaulds purchase [5] Eltham Palace in 1930, Edward IV’s Great Hall has no roof, the moat is blocked up and the bridge is damaged. Much of the destruction of Henry VIII’s childhood palace is inflicted by Parliamentarians during the English Civil War of the 1660s.

Perhaps those who unkindly likened the modern [5] Eltham Palace to a cigarette factory never got the chance to admire its splendour from its gardens. Admittedly, [5] Eltham Palace is a whacky combination of medieval, Tudor and Art Deco. But, somehow, it works.

I enter the fabulous entrance hall designed in a Swedish style without a single piece of IKEA furniture in sight. Light floods in from a stunning ceiling dome made of glass bubbles. It’s a wow moment for me.

The ceiling to floor wooden marquetry surrounding the entrance hall deserves much attention. From this circular room, various doors and staircases lead me to more chambers to explore.

Adjoining the hall is the Italian drawing room. Tall windows draped in bright voiles allow sunlight to flood into this room with its wooden beamed ceiling. Italy also happens to be where the Courtaulds get married.

The bust of Virginia on a window sill upstairs is also Italian. It’s a wedding gift from her husband. Virginia is described by many as rebellious and unconventional. She has a tattoo (not many ladies of society had them in those days !!) and adopts a lemur as a household pet.

An audio guide imparts plenty of information as I tour round. It also lists all the latest mod cons the Courtaulds install, including underfloor heating, a dial-up telephone and a central vacuum cleaner system in the basement.

As a condition of the lease, the Courtaulds are made to reinstate the Great Hall to more or less how Edward IV had it originally. This is where the Courtaulds threw lavish parties, just as Royalty did in medieval times.

From the Great Hall, I spill out onto green lawns. Just past the lawn is a wisteria covered wooden bridge. In the dry moat running underneath, a long, broad border of flowers provide an explosion of summer colours against a weathered brick wall

It’s not all sunken rose gardens, borders and rockeries at Eltham. There are meadows and trees. And in the water filled section of the moat, there are fountains and lilies. As I wander around, I’m never far from the soothing sounds of cascading water or a bench to take it all in.

It’s a shame that much of the original manor that the Bishop of Durham, Anthony Bek, presents to Edward II in 1305 has not survived. Nor the personal stampmarks added by successive monarchs.

It is said that when Henry VIII pitched up at Eltham Palace the royal staff accompanying could number up to 800. The [6] Tilt Yard Approach outside the current walls of Eltham Palace looks as if it may have been part of the palace structures.

From [6] Tilt Yard Approach, it’s not surprising that I have to walk through a mile of suburbia in this popular neighbourhood before I get to the next stretch of green. The [7] Holy Trinity Church marks the point where a narrow lane cuts through a corner of Avery Hills.

Then it’s tarmac again, as I wander along [8] Buttery Lane to then cross over [9] Bexley Road. It’s worth pausing for a moment on Bexley Road’s traffic divider to appreciate how everything drops steeply away from this point. It’s a clue as to how hilly this area is !!

This walk ends at [10] Eltham Park South. My initial reaction is one of exhilaration. It may be just a large, wide, piece of grass, but all this space in the middle of suburbia London is liberating. And worthy of an impulsive run across it before doubling back for an ice cream from the kiosk and for the last leg to [11] Eltham Station for my journey home.