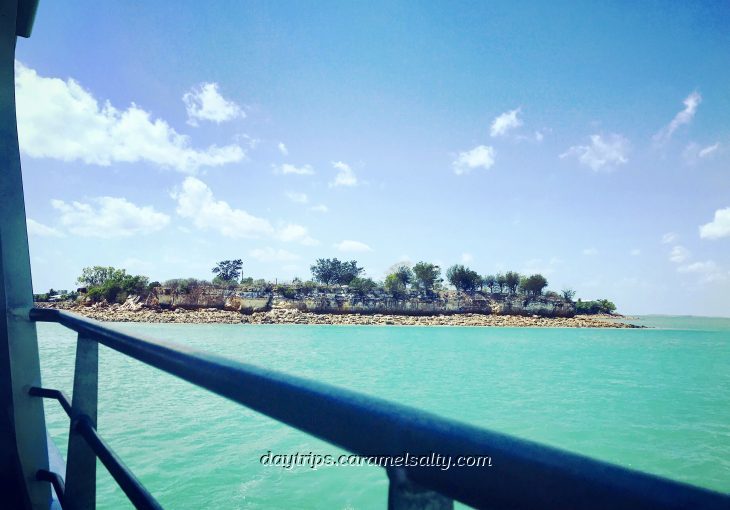 A long time ago in the Dreamtime, the earth was flat. Until the Rainbow Serpent writhes around, creating mountains and valleys in which the Larrakia people have been wandering about in for the last 60,000 years. Which makes my story from only 600 years ago, a relatively short one, I’m afraid.

The Macassans were the first foreigners to meet the Larrakia people back in the 1500s, when they sail over from Sulawesi in search of sea cucumbers. It is only in the 1600s that the first Europeans arrive in Darwin. They are the Dutch who are the first to map the area, whilst leaving behind Dutch sounding places like Groote Island and Arnhem Land.

Fast forwarding to 1802, the British Matthew Flinders sails in to Darwin to conduct the first ever round-the-continent cruise, cleverly disguised as an official topography mission. On returning to his starting point, he declares it an island, and a continent, and proposes the name Australis.

For the record, Charles Darwin never ever steps foot in the city named after him. And neither does Lord Palmerston, the British Prime Minister, after whom the first settlement in 1869 is named. But HMS Beagle, used by Darwin for earlier expeditions, does arrive in the harbour in 1839. That’s when the port is named in honour of the world’s most famous naturalist.

As this is a timeline of Darwin’s creation, I start my walk at the [1]Darwin Civic Centre. Just outside it, is a protected banyan tree called [2] Galamarrma– The tree of knowledge. This, and a few others dotted around the city, are the only remnants of the rainforest that was cleared away to build Palmerston.

The Galamarrma was originally by the now demolished Terminus Hotel. Its monicker relates to the fact that this is where the young Chinese migrants would gather to learn from their elders. And where the general notice board is. And also the mailing address for Darwin!

Around the [3] Darwin Interchange are buildings from the period when it was administered by New South Wales, followed by Adelaide. These include the [4] Christ Church Cathedral, the [5] remains of Palmerston Town Hall destroyed by the 1974 Cyclone Tracy and [6] Brown Mart, a procellanite stone building. Brown Mart is a theatre today.

Walking past the [7] Supreme Courts, I head to the colonial style timber [8] Government House. The 1870 building had to be rebuilt in 1883, after white ants demolish it. The prevalence of such robust insects in Darwin is taken advantage of by a local pest control firm who suggest that Darwin is built on a massive ants nest. What a sales pitch!

The next development in Darwin’s history are the arrival of the poles. Not the Eastern Europeans, but tall wooden structures connected by telegraph cables. Because it’s whilst the men are digging to plant them, that gold is discovered at Pine Creek in 1870. Which causes a rush of European and Chinese immigrants to Darwin.

Early migrants to Darwin arrive only by ship. [8] Hughes Road used to be the old harbour road. Immigrants would trek up the steps known as Chinaman’s Walk, which led from the harbour. By the waterfront, a Chinatown of wooden shack springs up quickly.

There are great views of the [9] Darwin Waterfront from the brand new modern [10] Sky Bridge. In November 1871, the harbour is a point of excitement when 3 ships arrive from Jawa with long, thick cables trailing behind. It takes another year before the cables are connected all the way overland to Adelaide, the colonial capital.

Australia is now connected to the rest of the world, i.e. London. Which spells the beginning of the end of bush telegraph, where news is carried by itinerant workers from god forsaken mines to remote farms and police outposts. Being able to now receive news directly from England within 9 hours is a vast improvement to receiving 6 week old papers delivered by the mail man.

The harbour is for another day, as the story continues back in Darwin, where the Chinese now outnumber the Westerners by 6000 to 300. The European Darwinians suffer a further blow when 98 of them, some quite prominent, drown after the SS Gothenburg hits a barrier reef off Queensland in a cyclone in Feb 1875. (More details of the shipwreck here).

Darwin’s [11] Chinese Museum is the first ever in the world. It is located in the grounds of the [12] Chung Wah Society. The temple is built with Feng Shui principles in mind. I’m told that it’s the only building in Darwin to not have fans or air conditioning. The breeze sweeping in through the open atrium is extremely soothing as it plays the chimes. In contrast, it is blistering hot outside as I peruse the interesting black and white photo archives on the wall of the society’s perimeter.

The Chinese community of Darwin is greatly impacted by the 1901 White Australian Policy. Given the title, I can only surmise that it was rather racist. And it was, as uneducated migrants had to pass a European (not necessarily English) language test. The Chinese are prevented from hiring local aborigines. Or from moving to other parts of Australia. As a result, many leave or are deported.

Back in the centre of Darwin, I’m outside the old [13] Victoria Hotel. This luxurious hotel is built in 1890 by Ellen Ryan, the richest woman in the Northern Territory. It’s frequented by VIPs, and many who make aviation history in flying from London to Darwin. There are photos and mementos from these pilots including Eve Jackson, the first to fly solo, unassisted, in a microlight in 1987.

The hotel survives many cyclones. The worst damage is the loss of its roof, which it does far fewer times than the hotel changing hands. Under the tenure of Mr. Lim (1946-1965), the pub becomes a popular watering hole, frequented by ” crocodile shooters, buffalo hunters, mining prospectors, as well as local office workers and bank staff”. How I wish I could’ve been there!

My final stop is a bite to eat at the [14] Four Birds Cafe, in the shady courtyard of the old Star Cinema, now converted to shops and restaurants. A large sepia photo of an early film showing here, grabs my attention. In the audience is a white hunter, rifle propped by his side, hat hanging off it. As for the aborigines, they dare not watch. To deflect the spirits, their hands are half over their eyes.

Perhaps the hunter in the photo ended up at the bar at Victoria hotel after the film. Or did he and the Larakkias at the cinema talk about leaving water holes well alone? For the exhausted Rainbow Serpent ends up resting at the bottom of one. But if disturbed, he will emerge and crawl over the tree tops, causing havoc, until he finds another water hole to rest in.