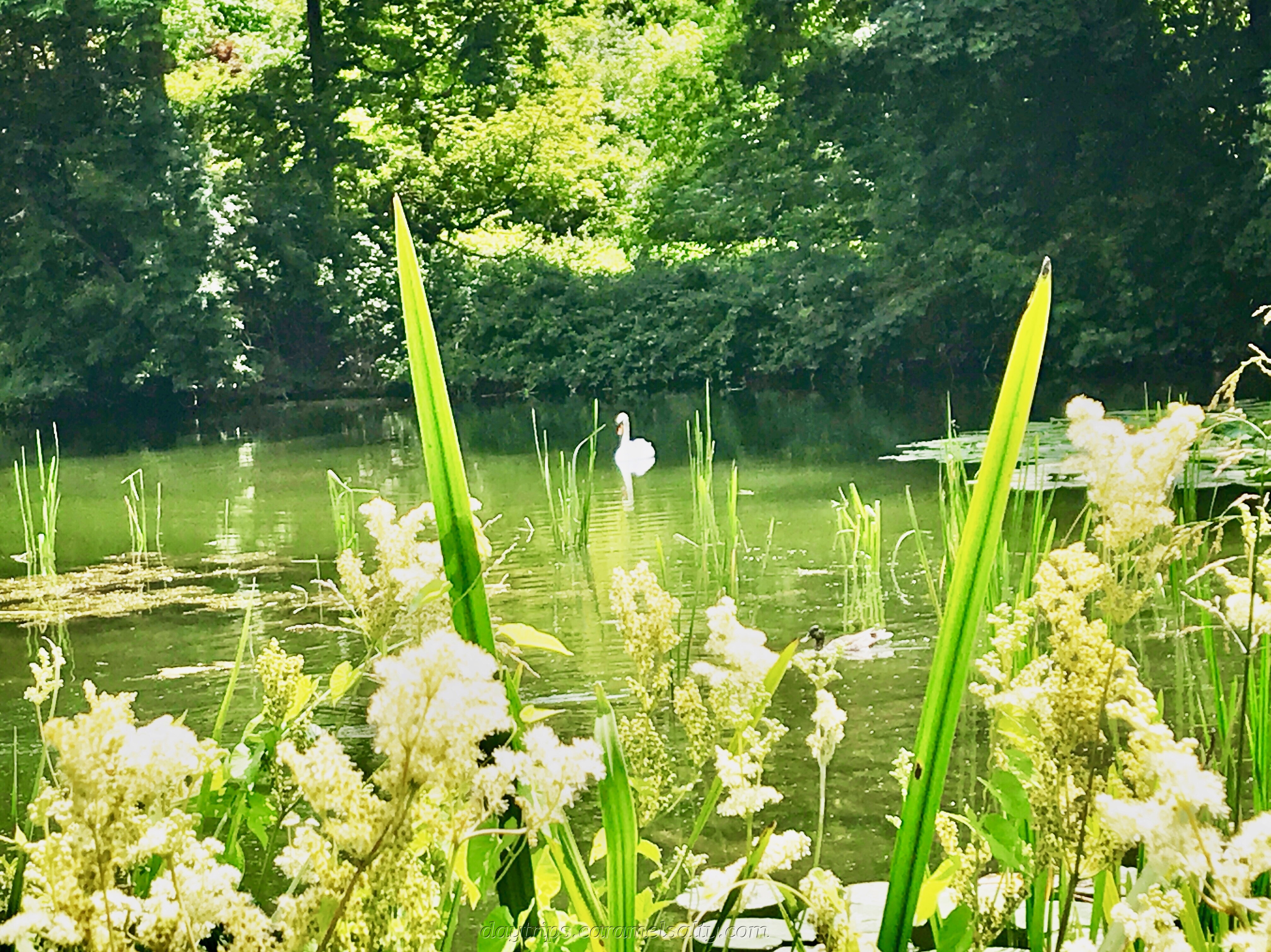 “Oh the grand old Dukes of Marlborough, they had acres of land,
they built a palace oh so grand, and appointed Lancelot,
and when he was done, he was done,
a landscape with trees all around,
at a palace where a Prime Minister, was born near Oxford Town”

It’s late afternoon and I find myself amongst the fountains and box hedge parterre in the formal Italian Gardens of Blenheim Palace. The Palace and Great Lake have been covered this morning. But before I continue to explore more of the 2000 acres that make up Blenheim Palace’s grounds, I shall first relax by the fountains with some English afternoon tea as I soak in the greenery around me .

Part two of my wander round Blenheim Palace is due south, towards the tall columnar Victory Monument on a mound. This requires me to cross over on the Grand Bridge, to the other side where Woodstock Manor once stood. Before the manor, the earliest record I can find of a formal structure in this area is a seven mile wall that the Norman King Henry I builds in 1129 to form a park. And in this park he keeps exotic animals, such as lions and camels, and the first ever porcupine in England.

Woodstock also had a famous prisoner, Elizabeth I. On being released from the Tower of London in 1554, she was incarcerated in the lodge house. The manor, apparently, was far too dilapidated for her. But unlike me today, she didn’t have the beautiful landscaped gardens that I am enjoying at Blenheim. So to stave off boredom, she resorts to writing poems on walls at Woodstock Manor. Sadly, walls and poems exist no more.

The walk up the hill towards Victory Monument provides me with wonderful sweeping views of Blenheim’s grounds. And when I return back to the low path for my walk around Queen Pond, I’m reminded of the Peak District. With carefully planted trees on gentle sloping grass meadows, Capability Brown creates a natural landscape in which sheep graze nonchalantly.

So with some time before I get to the most memorable view of the day, I revert back to the remaining 8 Dukes of Marlborough. The achievements of the 4th, 5th, 6th and 7th Dukes, who reigned from 1758 and 1899, are pretty varied. For starters, between them, they had 32 children! The 5th Duke’s mounting debts forces him to sell his other assets and retire to Blenheim. A scathing report by the diarist Harriet Arbuthnot criticises his move to commercialize Blenheim. I wonder what she would say about the scale of the commercialisation of stately homes and palaces in the modern world today.

The other interesting fact about the 5th Duke, is the family name change. He was born a Spencer, but was authorised to take on the name of Churchill. This is rather fortunate, as when it comes to the 8th Duke of Marlborough (1883-1892), his brother has a son named Winston, born in 1874.  If the 5th Duke hadn’t reverted back to his ancestor’s name, than Britain’s famous war-time Prime Minister would have been called Winston Spencer instead.

The 8th Duke of Marlborough is worthy of a blog in his own right. First of all there is the Aylesford Affair, which runs from 1874 and implicates so many, including The Aylesburys, the Spencer-Churchills and the Prince of Wales. The Duke’s brother tries to blackmail the Prince of Wales. Queen Victoria steps in. Even Disraeli has to get involved. In 1878, Albertha, the Duke’s long-suffering wife applies for a separation. Edith Aylesford gives birth to the Duke’s illegitimate son, in 1881. But it doesn’t stop there. The amorous Duke gets implicated in the divorce proceedings of Lady Colin, in what I shall refer to as the “What the butler saw through the key hole” divorce case.

By the time it comes round to the 9th Duke of Marlborough (1892-1934), the fortunes of the Marlboroughs are rather depleted, so much so that it is rumoured that he marries the American heiress Consuelo Vanderbilt for the wedding dowry. Consuelo has a dominant mother, the type that refuses to allow her daughter to marry beneath her station. Or quietly for that matter. And so poor Consuelo is pressured to give up her true love and marries the 9th Duke in an engagement surrounded in publicity.

It’s not a happy marriage. By the time John Singer Sargeant paints the family portrait, Consuelo and the Duke are agonising about a divorce. However the law at that time only permits a divorce on the grounds of adultery or abuse. As neither is true, the couple eventually opt for a separation.

As for the 9th Duke (1897-1972), his life story is positively mediocre in relation to the 8th Duke. However mediocre is not the word that I would use for this view I have of Blenheim Palace at this moment. In fact stunning is probably more apt. I’m stood not far from the Woodstock Entrance, on the far side of Queen Pond from the palace, taking in the views of Blenheim Palace and the Grand Bridge through the trees from this side of the pond. It’s simply jaw dropping, gasp taking, breath holding. A most fabulous view to end a glorious day out at this very stately home.

I exit Blenheim into the village of Woodstock. This is where I presume the more modern 11th (1972-2014) and 12th (2014- today) Dukes of Marlborough may have popped into the charming pubs and hotels for a bevy or two. Jamie, as the current Duke is known as, had a colourful past. But all ends well, as father and son repair bridges before it’s too late.

Standing at the bus stop on Woodstock’s main road, my day out at Blenheim is coming to an end. It has been fabulous. From the grand palace, to the stories behind the Dukes and Duchesses of Marlborough, and Capability Brown’s amazing landscaped gardens which I can only imagine changes spectacularly with the seasons, this Versailles of England should be on everyone’s to do list if ever in London or Oxford.