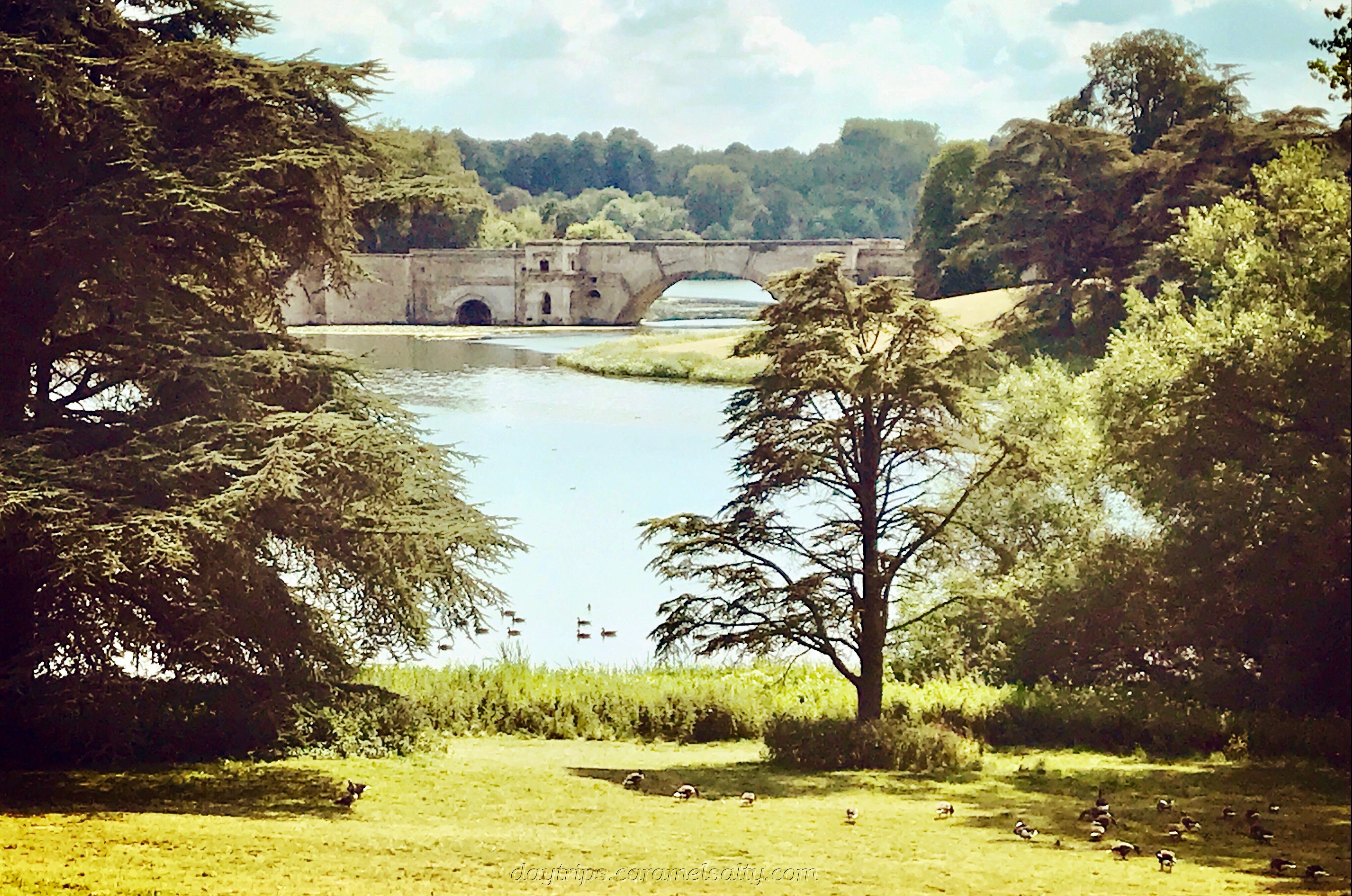 In a town along the Danube, in the depth of Bavaria, a man scrawls a note on the back of a tavern bill. It says “I have not time to say more, but to beg you will give my duty to the Queen and let her know her Army has had a glorious victory”. The year was 1704, the man was the 1st Duke of Marlborough, the town was Blenheim, and the victory was over the formidable armies of Louis the XIV of France.

The Duke’s note takes 8 days to reach England by horseback. Thankfully it takes me just a fraction of that time to get from London to Blenheim. It’s a full train, with some even standing. But not everyone is heading to Woodstock. The  train virtually empties out at Bicester for the Outlet Village. And so I enjoy a quiet train the rest of the way to Oxford Parkway.

The journey cuts through a part of the picturesque Chilterns. The train alternates between running along a ridge, and then in shallow valleys. When not passing through towns, I am surrounded by meadows and fields of crops on an undulating countryside. But my smugness had already runneth over on crossing the M25 with its nose to tail traffic earlier on in the journey.

When I set eyes on Blenheim Palace for the very first time, the word “Versailles” crosses my lips. And so it should, for the manor that stood here at that time was demolished to make way for a palace to rival that of the defeated Sun King, Louis the XIV. This is the gift that the incredibly grateful Queen Anne bestows on the 1st Duke of Marlborough for a victory that marks the turning point in the Spanish War of Succession.

My story starts a little earlier in 1675 when Anne, the daughter of James II, and Sarah Jennings, future wife of the Duke of Marlborough meet. They become the closest of friends. So very close that some insinuate that their relationship was more intimate. These two best friends were like chalk and cheese. Anne was short, shy, sickly and shortsighted, Sarah on the other hand was charismatic and hot-tempered.

In 1688, William the III of Orange overthrows Anne’s Catholic father,  James II in the Glorious Revolution. When William dies in Kensington Palace, widowed and childless in 1702, the Protestant Anne becomes Queen. Anne immediately declares England’s support for Spain in the Spanish War of Succession. England is now at war with France.

Cue the Duke of Marlborough. As Commander of the English Army, this impressive military leader leads his soldiers into the Battle of Blenheim. It is interesting to note that when the Duke writes the note to let England know of the victory, he addresses the note to his wife, and not the Queen. Clearly, Sarah is very influential in the Queen’s court.

However Sarah’s increasing public put downs of the Queen, tries the Queen’s patience. When the Queen takes on a new companion, Abigail Masham, the rift between Sarah and the Queen escalates. In 1711, Sarah and the Duke are relieved of all their duties and annuities. Parliamentary funding of the housebuilding ceases and the Marlboroughs live in exile in Europe. They only return to England on the same afternoon as Anne’s death in 1714.

Tragically, Sarah and the Duke had lost their only surviving son to small pox in 1703. I wonder how much of this is Sarah’s doing, to have a law of Parliament changed in 1704 so that title could pass to a female heir, but only for this generation of the Marlboroughs. And so on her father’s death, the late Duke’s eldest child, Henrietta, becomes the 2nd Duchess of Marlborough (1722-1733)

The 3rd Duke of Marlborough (1733-1758) is actually Henrietta’s nephew, as Henrietta only had daughters and her sister dies before her. The family name is now Spencer. Charles’ daughter is Diana Spencer. It’s rather uncanny that Diana’s mother wanted her to marry the Prince of Wales (she didn’t in the end) and, just like the modern-day Diana Spencer, she too tragically dies at a young age. Were both Dianas related ? Yes, very much so, I find out.

At No. 4, is George Spencer (1758-1817). His most astute appointment of Lancelot “Capability” Brown is the source of my very enjoyable afternoon at Blenheim. During his lifetime, Capability Brown is responsible for transforming several private gardens into a magical world of greenery. It takes Capability a good 10 years to design the grounds of Blenheim Palace.

Where should I start with my musings of the gardens? Perhaps I should start with the eye-catching tree fringed Great Lake, as I emerge out onto the formal terrace. As I walk along the lakeside path, I can’t help but think I’m in the Lake District. I don’t always stick to the path, though. How could I when the tall, mature trees of sweet chestnut, oaks, birches, and many more beckon me to wander amongst them?

I shortly arrive at the cascades. Water rushes down grey boulders into a frothing pool. A path leads me down to the bridge across the cascades. My eyes are drawn to a serene swan along the tranquil Bladon Lake fed by the water rushing over what is Capability’s dam between  the two lakes. And from there I walk up through a meadow of mature trees, set out to entice me up the gentle slope from the water.

The ace in the cards, in my view, are the magnificent trees in these sprawling gardens. Capability is a genius when it comes to using trees to accentuate, or hide or to draw your eyes to a pleasing vista. Some of the trees along the path are labelled, which always goes appreciated by me. No labels are required though for the breathtaking, towering yews everywhere. I never realised that they could grow to such height and breadth.

And with sweet perfume in the air as I walk past the rose garden, I wander back to the palace for a short break. There’s still the other pond to do and another 8 Dukes to get through. Plenty to look forward to for Part II this afternoon.