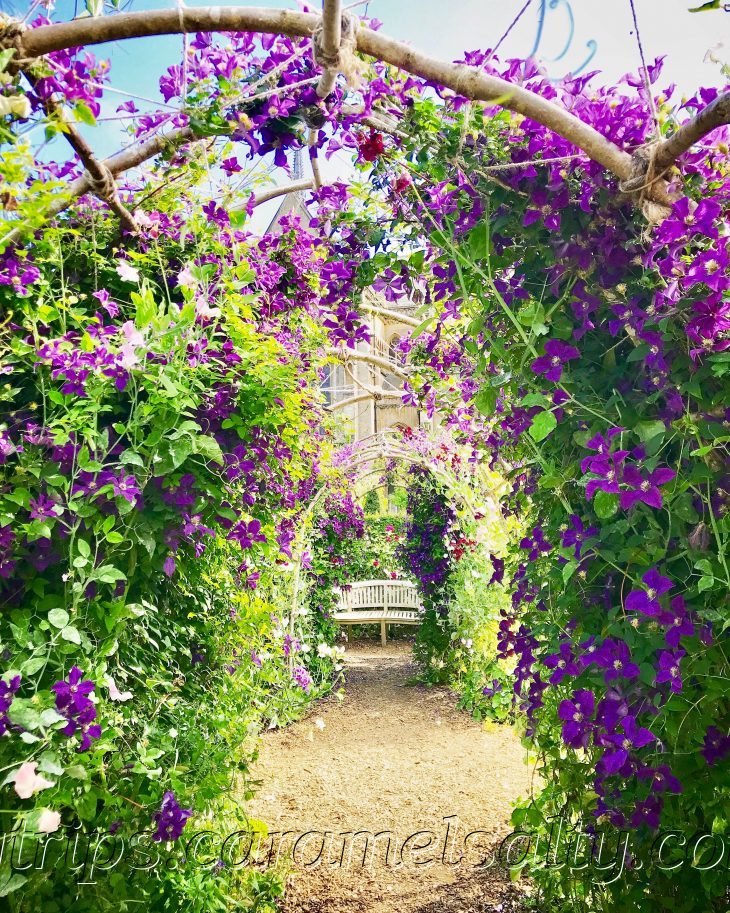 I’ve done a six-mile walk, from Arundel to Stoke,
and now I must return, to the company of folk,
I walk along a tunnel, of ferns and tall lithe trees,
and in my hair I feel, a pleasing little breeze,
And soon I pass a lake, with many boaters on,
and thereafter I’m soon, in Arundel the town.

When the Normans they invade and win that famous battle,
they set about to shore up their defences from a castle,
Roger de Montgomery the earliest Earl of Arundel,
decides to build a wooden keep, fresh water from a well,
For far away from river flats the castle has been found,
as watching enemy approach is best from highest ground.
Monsieur Roger’s titles, extend to Shrewsbury,
he builds a castle there, as well as Oswestry,
And lets not forget Hopton, and Clun and Ludlow too,
and the last one, in his name, castle Montgomery.

But when dear Roger dies, his son creates mayhem,
for King Henry of England, 4th son of William,
And so the wooden keep, King Henry he does seize,
it goes to his poor widow, when he becomes deceased,
The widow sets to marry, William D’Aubigny,
and when the heirs run out, there is a family,
connected by a marriage, the titles to these lands,
back in the 13th century, pass to the Fitzalans.

The Duke of Norfolk’s position, is such a powerful one,
he is the premier Duke, in the peerage of England,
He’s also the Earl Marshall, his job is to protect,
the monarch, and his horse, on England’s foes he’ll act,
The 1st Duke of Norfolk, dies in the War of Roses,
the 3rd Duke he does stop, the Evil May Day Riots,
Today these duties are, performed by government,
but he has still one job, he opens our Parliament.

The 3rd Duke of Norfolk, his name is Thomas Howard,
he’s also uncle to, Boleyn and Catherine Howard,
He helps the 8th Henry, divorce his Spanish Queen,
which clears the path for Henry, to marry Anne Boleyn,
Presiding over the trial, of his niece and her brother,
the fact she is his niece, to him is not a bother,
And when the marriage to, Anne of Cleves falls down,
this is how he brings, the Chief Minister down,
And on the day that Cromwell, is finally beheaded,
the King then sets to marry, his Queen Catherine Howard,
Then charged with adultery, she’s put on trial for treason,
and so it makes you think, his efforts had no reason,
But as a loyal servant, to King Henry the Eighth,
he’s paid in land and titles, despite his Catholic faith.

The 4th Duke of Norfolk, he knows to marry well,
and this is how the Norfolks, get sat at Arundel,
His first wife dies within a year, and so he weds again,
he finds another heiress, but death brings him more pain,
And when his third wife dies, he starts a little plot,
to reinstate a Catholic, by marrying Queen of Scot,
He knows he is the cousin, removed twice from his Queen,
and yet to her he keeps, denying his wrong-doin’,
When Lizzie she finds out, she is so very cross,
she throws him in the tower and beheads him in due course.

In Sixteen Forty Three, the castle it was taken,
by Royalist Lord Hopton, from the Parliamentarian,
And so a siege was laid, by Sir William Waller,
he drains the lake beside, to deprive it of water,
The Royalists inside it, bear eighteen days of hell,
despite their stock of meat, it’s thirst they couldn’t quell

And when the war is over, the castle it is ruined,
it takes a century, for the castle to be built,
The 11th Duke of Norfolk, a plan he does compile,
to reconstruct the castle, but in a Gothic style,
It doesn’t look at all, like the castle before the war,
but still it strikes a chord, and inspires praise and awe.

The 11th Duke of Norfolk, he built the library,
it is my favourite room, its long, its bright and airy,
I love the decoration, it’s all in crimson red,
I wonder if the thousand books, have actually been read.

The highlight for the 13th, Duke of Norfolk’s calendar,
was the 4 day 3 night visit, of Bertie and Victoria.
But despite 2 year notice, “the bedroom it was small”
so commented Victoria, “and I don’t like pink at all”.

The 15th Duke of Norfolk, a very devout Catholic,
decides to build a church, not very far at all,
Despite the Victorian era, he builds it in French Gothic,
and it is so impressive, seen from the castle wall,
They stroll across the flowery lawn, it’s colours therapeutic,
and within just five minutes walk, the Dukes are in God’s hall.

The lovely flower gardens, are the highlight of my tour,
the colours are a riot, a summer treat for sure
Of pinks and purples, bright and mellow,
red white orange, green and yellow,
it’s all the rainbow colours, but just in disarray,
but that is why it does, make for a great display.

And there you have it all, my trip to Arundel,
it’s worth another visit, for there is more to tell,
I have a train to catch, back to grimy London,
but first I make a stop, at the pubs here so abundant,
My final treat today, at the light blue Swan Hotel,
is a ham hock egg of scotch, as I leave quaint Arundel.

How to Get to Arundel