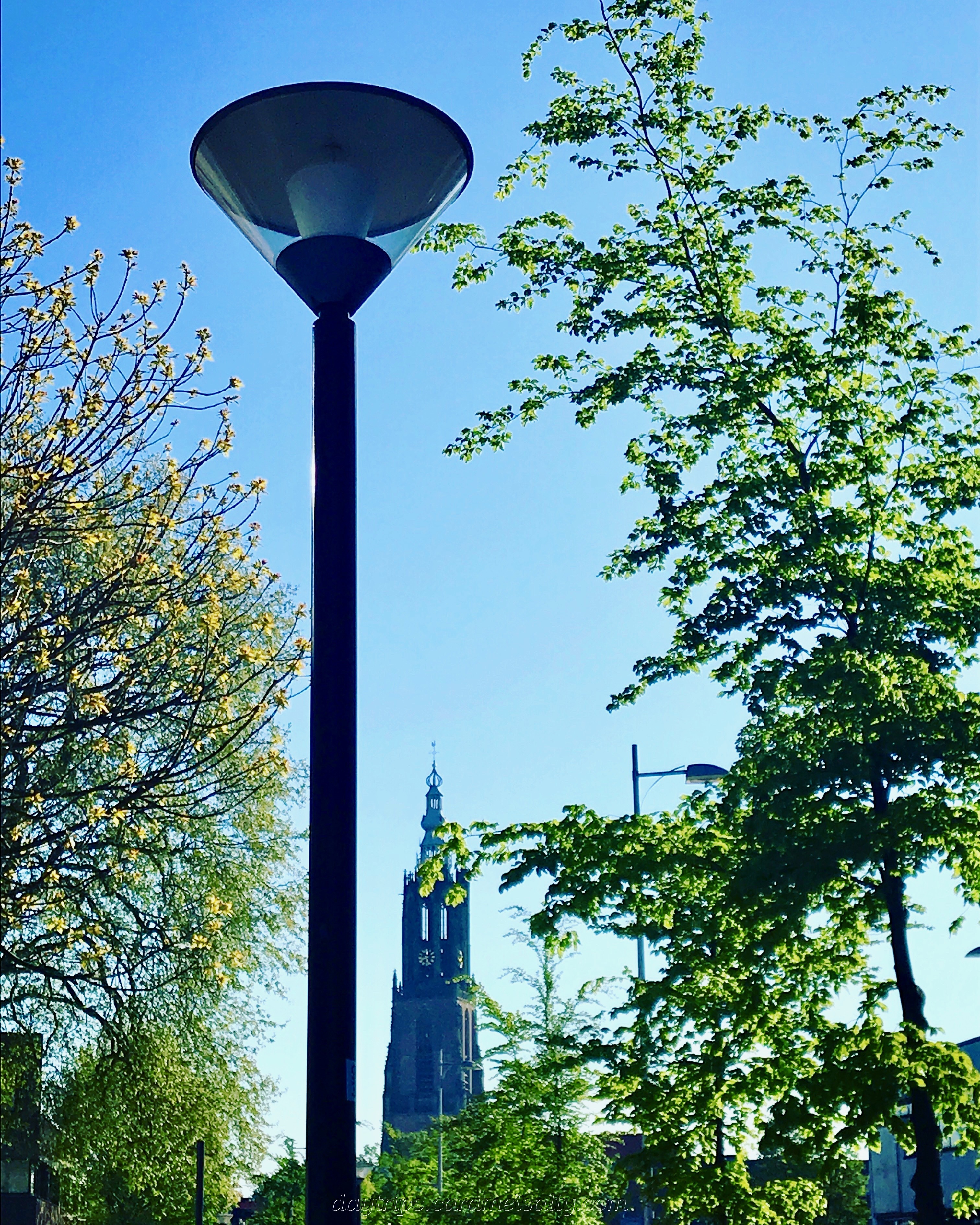 In 1661, around 400 people wander out to the Soest moor where a 10-tonne glacial boulder lies. They put ropes around it, and use sticks to dislodge it. They then drag it all the way back to Amersfoort, where they feast on beer and pretzels. And then they bury the boulder in 1672. Was this the actions of a strange cult in Amersfoort, or was this just a prank?

On exiting Mondriaanhuis, like a moth to flame, I’m drawn back again to the magical [1] Muurhuizen, a ring of terraced houses built on the foundations of the original city walls. At No. 25 Muurhuizen, [2] Groot Tinnenburg used to be connected to the gate that once stood here. The markings on the wall provide a good indication of how thick the city walls used to be.

I meander around the back streets of Mondriaanhuis enjoying the quiet, the medieval architecture and the boldly painted shutters and doors. Just walking around the cobbled streets of the very compact Amersfoort is such a delight in itself. I’m confident that by the end of the day I’ll have managed to have walked all of Amersfoort’s pretty little streets.

For the afternoon I decide to circumnavigate Amersfoort anti-clockwise along a new canal, the [3] Westsingel. And my reward is a close up view of the incredibly tall [4] Onze Lieve Vrouwetoren. This church tower has dominated my views all morning. I don’t need convincing that this 98 meter tower is the third highest in the Netherlands.

My anticlockwise route drops me right outside [5] Museum Flehite. The museum is housed in a wall house. Which means my visit to the museum not only covers Amersfoort’s history and paintings of the city, but also gives me the opportunity to see the internal structure of a wall house.

It’s also in Museum Flehite that I come across the works of a certain Mathias Calzeta Blanco from Amersfoort. At first, I wonder what an Italian is doing in a place like this. And then I realise that Calzeta Blanco (White House) is the Italian alias for the very Dutch Mathias Withoos. He is best known for his details of insects, reptiles and undergrowth in the foreground of his paintings.

From there I stroll over to the most visited gate of Amersfoort, the [6] Koppelpoort. Completed in 1425 in the new city wall, the archway once had a portcullis, which could be dropped to block the way in by canal. As for the gate over the road, “wheel-turners” were employed to raise and drop the gates. It was a very dangerous job.

In days gone by, ships would line outside the Koppelpoort. On the grounds around this gate, linen is bleached, cattle graze, grain is cultivated and tobacco leaves hang out to dry. Amersfoort hardly changes between 1450 and 1829. Then in 1829, much of the city’s medieval walls and gates are demolished. The canals are filled in. And in 1863, the locomotives steam in.

On cue, a train whistles past just beyond Koppelpoort. With the trains, Amersfoort’s economy gets a boost. I wander across to where the city expands beyond its walls during industrialisation. As expected, it’s a complete contrast to the medieval city I have just stepped out of. Here are modern buildings, trendy shops and the contemporary art and design museum [7] Kunsthal Kade. When I visit the Kunsthal Kade today, there’s an exhibition of artists from South Africa, a reminder of the colonial past of the Netherlands.

Navigating by the Onze Lieve back to the medieval core, I arrive at the square in front of the church tower. But there’s no sign of a church. The lack of a church can be blamed on the Reformists who use the church to store gun powder and produce grenades. In 1787, a soldier accidentally scrapes against one of the grenades. The resulting massive explosion flattens the church, but not the tower. I also assume the poor soldier did not fare very well either.

Before the explosion, the church was a pilgrimage point. Around 1450, a young lass on her way to a convent in Amersfoort, carries with her a crude wooden statue of Mary and the infant Jesus. Embarrassed by it, she throws it into the canal near Kamperbinnenpoort. But the statue is retrieved by another woman, on receiving visions of the canal. The statue is taken to the church and miracles, such as candles burning for longer, are noted. The story of the miracles spread.

With hundreds of pilgrims turning up, the church raises enough revenue to construct a tower of 346 steps. All of which I climb on the [8] guided tour of the tower. When I get to the very top, I’m at eye level with the magnificent slate tiled roof. I get fabulous views of Amersfoort as I ascend. And in the distance, I make out three towers all the way in Amsterdam!

And I accomplish my afternoon’s mission of finding the centre of the Netherlands. So tall and visible is the Onze Lieve that it is used as the point for the accurate triangulation of the country. At the base of the tower, a laser light does indeed mark the spot of the point x = 0 and y = 0 of the Netherlands.

There’s time to sneak in a [9] canal boat trip where I get close to local sculptor Tom Mooy’s drainage spouts. But as the tour is in Dutch, and I’ve walked umpteen times around these canals, my thoughts drift towards Amersfoort’s war stories given its location so close to the eastern border. From my Dordrecht visit I already know of the 1672 French invasion and the repercussions it had for the de Witt brothers. More recently, in May 1940, the entire village of 43,000 is evacuated in advance of a 4 day battle. Despite the efforts of the Dutch, they are invaded by Germany in the same month. This time there are grave repercussions for Rotterdam, which I have yet to visit.

On my way back to the train station, I go past the [11] Amersfoortse Kei. This is the boulder I refer to earlier. The antics surrounding the boulder was a result of a bet between two landlords and not a beer drinking pretzel eating cult. But when nearby towns nickname the people of Amersfoort Keientrekker (boulder-puller), the embarrassed city bury the boulder. It’s only in 1903 that the city could finally bring itself to uncover the boulder.

So my mission accomplished in finding the centre of Amersfoort, and the mystery of the large boulder solved, I settle down in the train back to Utrecht. What a grand old day I’ve had in Amersfoort. It comes highly recommended as a day trip in the Netherlands.

Some Things You Need to Know