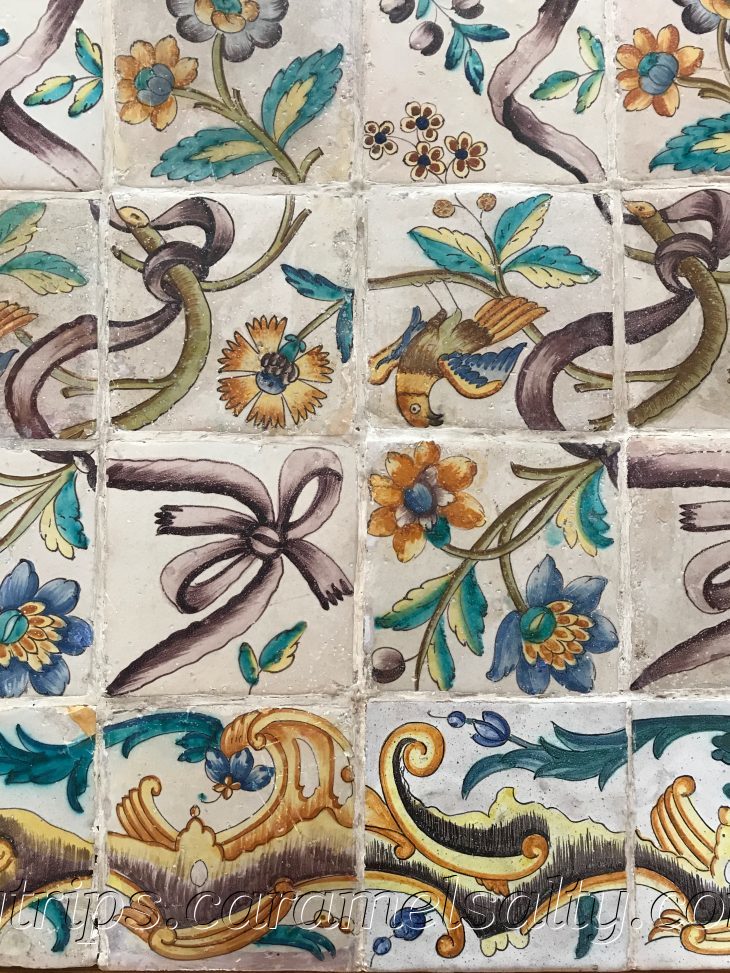 Xátiva is a 45 minute train journey. One of orange trees and dark green sierras. But I’m only just scratching the surface of this Spanish vista. Because after only a 30 minute walk from Xátiva’s train station, I’m at the top of the world. Looking down at creation. Both human and divine.

Just like my other journeys to hilltop castles, this imposing castle, on the crest of the Serra Vernissa comes into view from a distance. At 1,000 feet above sea level, it commands the via Augusta. This road from Rome (map here), cuts through Xátiva. It’s a road worth controlling, as it’s the busiest in medieval Spain.

The Roman fort here is no longer visible. But the remains of the Muslim city still are. Under Muslim rule, it changes hands several times. First the caliphate, then the Taifas, followed by the Almoravids (1092) and finally the Almohads (1171). It’s during the Almohad period that the most important fortification takes place.

The model of medieval Xátiva at the Municipal Museum reveals two fortified cities, a lower and an upper. The lower one stretched up the hill from the train station on the flat plain, all along my climb as I follow the signs to the castle, to slightly above where I now stand at the ruins of the [2] Atmel Gate.

The zig zagging tarmac road continues to the [3] Ermita Sant Josep. Next to it, another gate into the lower city, once stood. This is the gate through which the victorious Christian King, James I of Aragon, marches into the city in 1244, seizing it from the Moors.

The heart of the medieval city during Roman, Visigoth and Arab rule, is in the section I’ve just walked between Atmel Gate and the hermitage. It now becomes home for King James and his army for 2 years. Because that’s how long it takes him to then seize the upper city, way up above me.

The scent of lavender from below gives way to fresh pine higher up. Areas have also been designated as micro reserves to protect the endangered native plant, the flowering bird’s eye. And as for the views, they become more and more stunning as I climb.

Inside the fort, I realise it’s much bigger than I had imagined. If it took a leisurely thirty minutes to wander up to it, it takes another hour to explore its chapels, walls, rooms, fountains, museums and cáfe with a view. There’s more climbing inside. But simply worth it, as I soon find out.

If the Spanish plains towards the train station had seemed dry and brown, the other side is verdant and green, lush with orange orchards, edged with the jagged outlines of dark green sierras still blanketed in morning mist. For a closer view of this gorgeous farmland, I recommend the [5] Porta del Socors near the ticket booth that spills out to the precipice.

I can’t leave without talking about at least one of the conflicts that plays out here. Charles II of Spain (House of Habsburg) dies childless. His closest relatives are Philip V (French Bourbon) and Archduke Charles of Austria (House of Habsburg). But instead of sorting it out over a game of poker, Europe takes sides in the Spanish War of Succession (1701-1714).

Phillip wins the battle at Almansa (1707). After which, he then drives away the rest of the Austrian army within Xátiva castle. To celebrate his decisive victory at Almansa, Phillip besieges Xátiva, burns it down and renames it San Felipe after him. The city has never forgiven him this insult. Which is why his portrait hangs upside down till today.

With Phillip V’s incessant bombing weakening the fort, his torching of the city causing it to be abandoned for years, the last thing the city needs is an earthquake. But an earthquake it gets. A major one in 1748, that destroys much of the castle, sadly.

The castle also becomes a prison for nobility. The Duque de Calabria, the King of Mallorca, the brother of Saint Francis Borgia (of the powerful Borgia family), Earl Jaime de Aragón, pretender to the crown of Aragon. To name just a few. Standing in their prison cells, I find it virtually windowless. And somewhat claustrophobic.

The steadfast faith of the men who lived in and defended this castle is omnipresent. And not just inside the castle. In the stillness of the morning, the peals of chapel bells from a nearby outcrop carry across to the castle. Other chapels dot the hills around. If not, a simple cross is installed.

Regretfully I must leave the fort and its many political intrigue, such as the imprisoned Duke of Calabria being offered the Spanish crown, the murder of Guillem Crespi de Valldaura by the “agermanados” and the mysterious l’Encorbert (story here) who turns up in Xátiva. But as I return to the lower city via the uneven stone path by the hermitage, I embrace the world of religious intrigue instead.

There are some impressive public buildings in the city. They stand in stark contrast to this typical Spanish pueblo of modest, terraced houses on narrow streets. It’s a reflection of religious wealth and power in minority circles, enjoyed by privileged families like the Borgias.

In the city, there are two noteworthy museums to visit. The [9] Museo de Municipal de L’Almodi for the must see model of old Xátiva. And its collection of tiles. However I struggle to understand the rest of the archaelogical collection, due to the lack of English signage.

The other is the three floors of fine art at the  [10] Casa de la Ensenanza. Starting with oil paintings of Xátiva on the ground floor, I move to renaissance art, detailed archaelogical carvings, portraits of nobility and a sprinkling of modern art. And the upside down portrait of Phillip V!!

Inevitably, my day out in Xátiva ends with the train journey in reverse. It’s back along those orange orchards of trees laden with fruit. A sure sign that Christmas is not far off.

Things You Need to Know