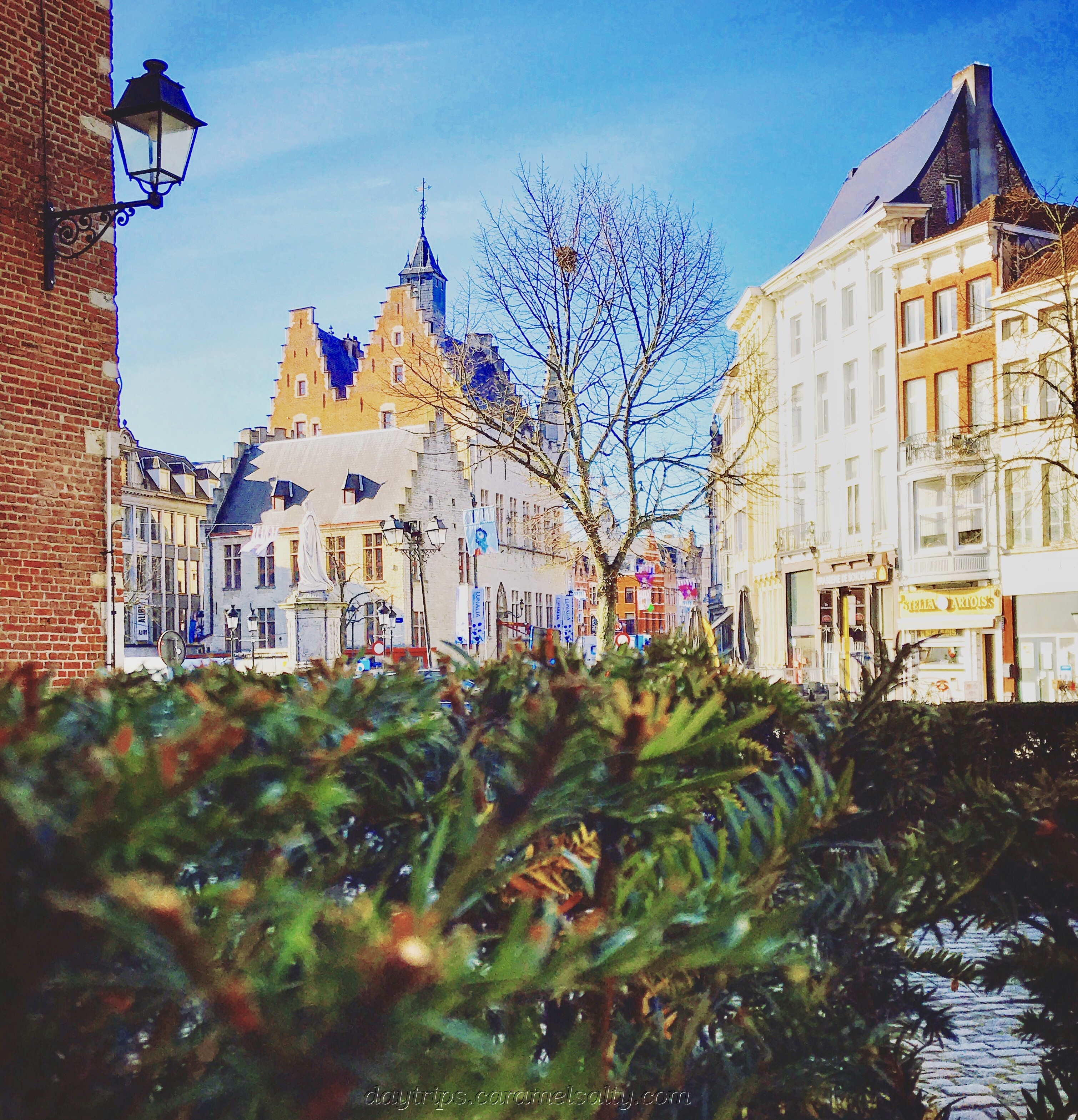 For a little city, Mechelen has more than its fair share of Unesco Sites. But lurking amongst these is a darker Mechelen of revolutions squashed, Spanish fury unleashed, torture on a wheel and mass deportation.

I salute the graffiti artists of Antwerp. Not an inch of concrete has been spared in the short distance between Antwerpen-Centraal and Antwerpen-Berchem stations, in their quest to fine tune their skills.

As for the scenery to Mechelen…. Well, I’m in Belgium. I don’t expect anything short of flat and wet. And the 20 minute journey to Mechelen does not disappoint.

A 10 minute walk from the train station gets me to the [1] River Dyle sparkling in the bright sunshine. Peering over the bridge, I discover a wooden footpath running along side it. I descend to the river.

Walking along a river into town is a far more pleasant way of arriving into a city. Judging by the volume of modern glass fronted flats being built along the canal, Mechelen seems to be a popular commuter town to Brussels.

From my low vantage point by the canal, it’s mainly church spires that I can spot. And there’s quite a few of them. I digress from the river for a closer inspection of the first of these spires, the [2] Church-of-Our-Lady-Across-the-Dyle. It’s firmly shut. Open only in the afternoon, says the panel on the outside.

Back on the river, the modern flats soon give way to typical Belgian houses with their gable fronts. Which is a relief, as I now begin to feel like I’m in an old Belgian town and not a modern suburb of any city in the world.

I climb onto the Grootbrug that crosses the River Dyle and head straight down to [3] Schoenmarkt. It’s a pretty cobbled square with some lovely old buildings. There are plenty of cafes and outdoor seating. The Belgians do love their cafe culture.

If I thought that the Schoenmarkt was a lovely little square, then my jaw drops when I turn round the corner to Steenweg. I’m surrounded by statues, spires, a huge church and stately brown brick buildings. I don’t think I’ve seen so many spires in such concentration in any town in Belgium.

I start with the small brown building. It’s actually the [4] Post Office, and its worth a wander in. There are still traces of some of the building’s older features  amongst its modern conversion to offices.

The church that dominates the Steenweg, just from it sheer size alone, is [5] St. Rumbold Cathedral, the symbol of Mechelen and a UNESCO World Heritage Site. You’d never think the bell tower is unfinished.

I like the fact that many churches are now taking the trouble to label their  paintings, especially as many of them are by famous artists. St Rumbold has Antoon Van Dyck’s (who is he? ) Christ on the Cross. Van Dyck is Ruben’s most famous student and has links to England. He is buried in St. Pauls, London.

I stumble upon a revolution. Actually I’m a little late, as it’s over, but [6] the Monument to the Peasant’s Revolt round the back of St Rumbold’s remains on the spot where Napoleon’s French Army execute 41 rebels in 1798. The cause of this short, failed uprising is the compulsory conscription of young men to the French Army, depriving farms of a labour force.

The [7] Klapgat is Mechelen’s most famous alley. This is where churchgoers used to get together after the service to “klap” (talk). It sits in the shadow of two churches, St Rumbold which I’ve just visited, and as I emerge out of the alley, Sint Janskerk, church #3. Visiting Sint Janskerk will have to wait till the afternoon.

Never one to take the straightforward route, I wind my way round the very pretty [8] Schoolstraat, which brings me out at St Rumbold’s from a different direction. En route I pass little cafes down the old narrow alleyways around the back of the church.

Narrow gives way to wide and large. I get my first view of the magnificent [9] Stadhuis and its Belfry. The belfry, a UNESCO World Heritage Site, was never finished because of the loss of revenue to the city from the decline in the cloth industry in the 14th century due to competition from England and the silting of the Zwin, which connected Bruges to the North Sea.

I then spill out to the [10] Grote Markt. It’s very grote. In fact its far groter than any I’ve seen in Belgium to date. There’s no shortage of cafes. It’s a weekday, but every seat outside is taken. I’ve not seen any tourist buses descending into Mechelen. So these must be the lucky locals or town hall workers taking advantage of the sunny weather.

I return to Schoenstraat to find a quieter restaurant to sink into, whilst I try to work out how close events in Mechelen are linked to events in Holland, my next visit. Just like Holland, prosperous Mechelen of the 15th century is under the rule of the Duchy of Burgundy. I fast forward to Charles the V who is in charge of the 17 Provinces of the Habsburg Netherlands, which include Belgium. In 1555 he abdicates. His son Phillip the II of Spain now rules. All is well thus far.

1556 is a pivotal year for Holland and Belgium, as my trip to Delft will show. William of Orange starts the 80 Years War in 1568. In 1572, Mechelen welcomes William’s troops. But William is soon forced back to Holland. With news of the approaching Spaniards, William’s garrison in Mechelen flee. The villagers should have followed suit, as Count Alba decides to make Mechelen an example to the others. Spanish Fury at Mechelen is unleashed, with the wholesale rape, murder and pillage of Mechelen.

With that, lunch is over. With 3 churches to visit, a tower to climb and beguinage to wander around, it certainly will be a packed afternoon indeed as my adventures continue in Mechelen (Afternoon in Mechelen blog)