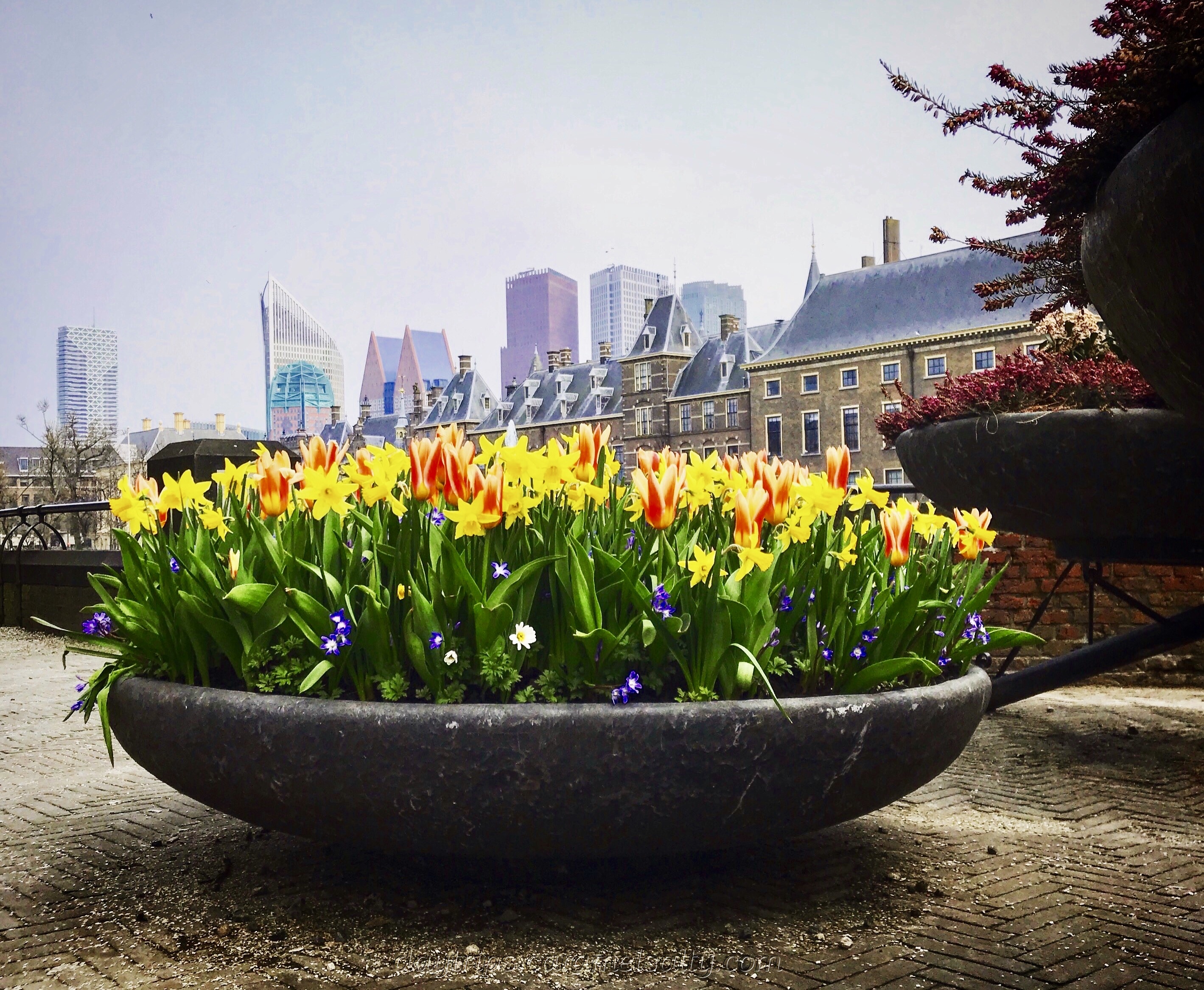 There is a forest in the Hague. In the 16th century, a leisure walker like me, may have bumped into men carrying executed bodies to the gallows fields on the dunes on the far side of Scheveningen Forest. In fact my story today ends with the most cruel execution of 2 brothers and a more recent execution of a woman who refuses the blindfold as she is shot.

It’s early morning as I walk along the duck pond in [1] Westbroekpark. Surprisingly, very few ducks are out and about this misty morning which is still trying to recover from the deluge the night before. Large rambling houses skirt the road running by this modern recreational park whilst a forest edges the other side. I exit Westbroekpark at the [2] Monument Troelstra (image).

Two lawnmowers break the silence of the morning as they motor up and down the large green surrounding yet another pond. Inhaling the smell of freshly cut damp grass, I enjoy this swathe of green that still separates The Hague from Scheveningen. Soon I’m at a pedestrian/bicycle crossing on the busy [3] Segbroeklaan or S200. The forest is on the other side.

The S200 slices through this area of greenery for a good reason. If it hadn’t been filled in with tarmac,  this would still be the 27 metre wide anti tank ditch that formed part of the Atlantic Wall built by the Germans. Many villages were destroyed and residents forcibly evicted during its construction. It’s apt therefore, that just behind me in the park, is the flower strewn World War II [4] Indisch Monument (image).

Once I cross the road, I’m in [5] Scheveningen Forest. The damp ground is covered with fallen leaves, many trees are still bare and the forest is grey and moody. But my spirit lifts when I spot Dutch bluebells (image) carpeting parts of the forest floor and playful dogs romping about on their early morning walk.

On emerging from the woods, I see the spire of the most photographed building in the Hague. The [6] Peace Palace, a beautiful Neo-Renaissance building that seats the United Nation’s International Court of Justice, is set in beautiful gardens. It’s where the Carnegie Wateler Peace Prize (story of its origin) is awarded every year. A past recipient is Sir Baden-Powell.

From here I head to the heart of Government in the Hague. I’m hoping for political intrigue and plenty of history.  So where better to start than the [7] Binnenhof, a castle built in 1248 by Count William II that marks the beginnings of the Hague. The Binnenhof is the focus of the pomp and circumstance of the annual opening of Parliament today.

When the castle is being built, Holland is part of the medieval Duchy of Burgundy, which is part of the huge Holy Roman Empire (map). This isn’t the Legionnaire marching Romans at the start of the first millenium. And neither is this empire based in Rome. It’s just a title, granted by the Pope to the Frankish king Charlemagne around 800 AD, for coming to his aid. It’s Roman in name, but German in reality.

The artificial lake of [8] the Hofvifer is built in 1350. Today it’s surrounded by some wonderful museums, much of which is concerned with the Golden Age of Holland in the 17th century. What happens in Holland between the rule of the Duchy of Burgundy and the Dutch Empire will have to wait till my trip to Delft.

I start with the [9] Hague History Museum. It provides a good overview of the Hague and Scheveningen through paintings, maps and videos. For light relief, it also has a dolls’ house collection. Following closely is the [10] Prince William V Gallery, which unfortunately only has a Dutch listing of the 150 paintings here. However I do spot a Potter (he paints cows and country scenes) and a Jan Steens (he paints stories). The next museum is thoroughly fascinating. It’s the [11] Prison Gate Museum, next door to the Prince William V Gallery. It’s only accessible by guided tour in Dutch ! But I get given an English booklet. This prison is created in the 16th century. Conditions are bad. Vermin crawl about in the dark, damp, crowded cells. Drinking water is supplied by the Hofvifer which is also the city’s drains.

It’s here that I learn about Cornelis de Witt, accused of a plot against William III of the House of Orange. I don’t need to understand the gesticulation of the Dutch guide to understand what hanging a man by his arms behind his back and 25 kilos tied to his toes is going to do to him. This is 1672. He is released but cannot walk. His brother Johan comes to fetch him from prison. But it’s a set up by the Orangists. Both brothers are lynched and meet a gruesome end, as depicted in this painting in the Rijkmuseum.

To add to the ambience, prisoners are afforded a view of the scaffolds on the Green Sod. I wander past Johan de Witt’s statue which stands where the Green Sod used to be, as I make my way to the last museum of the day, the [12] Mauritshuis. This reknowned art gallery provides a more pleasant distraction than the prison. In my opinion, there are 5 good reasons to visit the Maurithuis – Vermeer’s painting of Delft, Vermeer’s Girl with the Pearl Earring, Rembrandt’s self-portrait in 1669, the year of his death and the museum’s most famous piece, Potter’s The Bull.

And last but not least, the 5th reason to visit the Mauritshuis, is for the splendid views from the second floor, across the roof of the Government buildings next door. Followed by a relaxing lunch at the museum cafe.

I wander across to the [13] Hotel Des Indes for a well-earned coffee to round off lunch. A still warm Rolls Royce engine in the car park gives away the type of company I can expect in this ultra-chic 5-star hotel which dates from 1858. Given its location close to Parliament and the Peace Palace, I’m sure many distinguished guests stay here.

It has a splendid lounge. Many celebrities have visited this hotel. And by coincidence, I end the day with political intrigue surrounding another execution of a Dutch lady named Margarethe Zelle who once stayed in this hotel. She’s also known as Matahari. I have to hand it to the Daily Mail for this most captivating write-up of her life and death.

The Hague may be a far cry from the drugs, sex and rock and roll of Amsterdam, but I’ve ended the day on a high of wandering through an ancient forest, political shenanigans and coffee with VIPs around me.