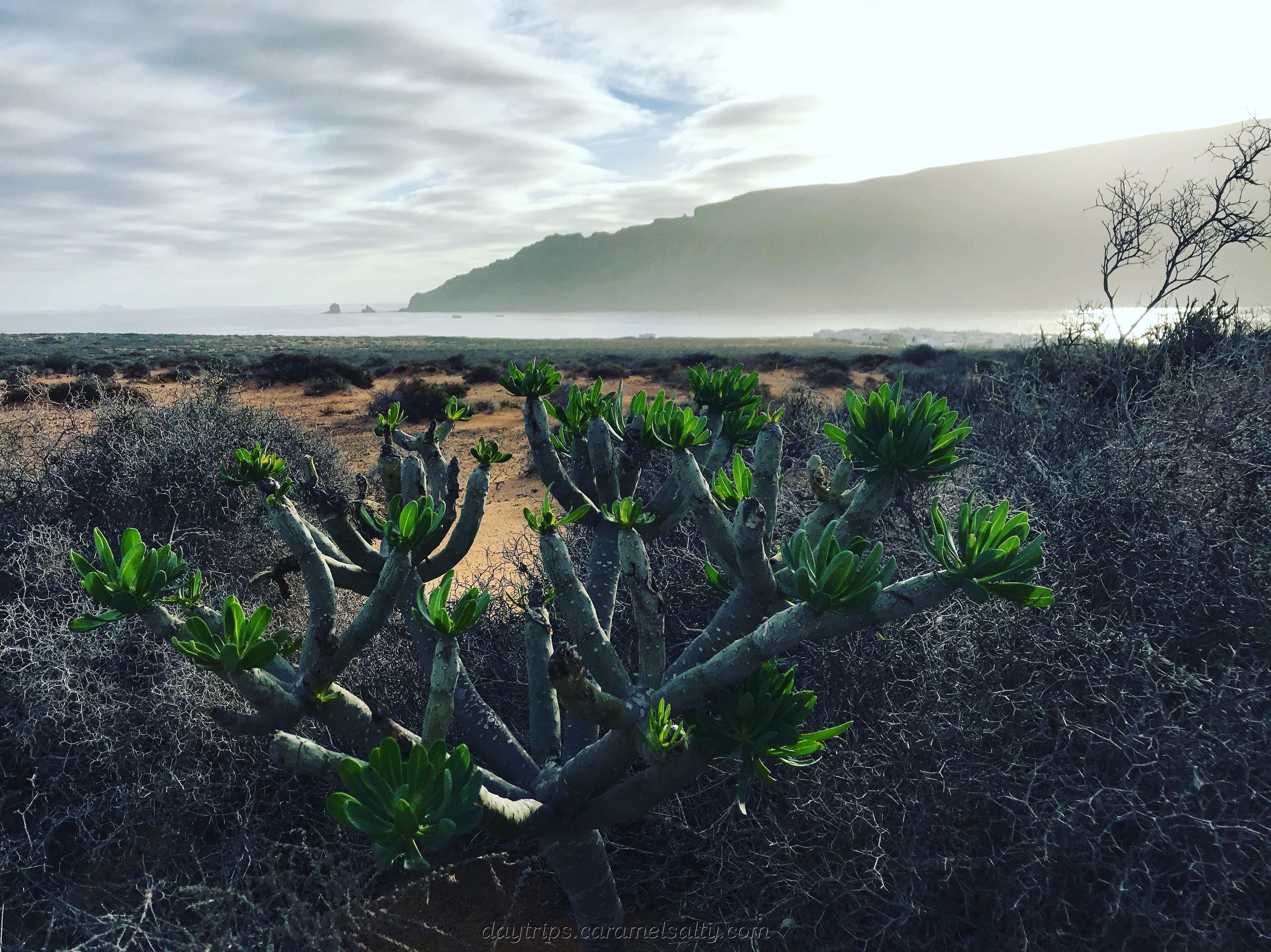 I had spied the ferry making its way to La Graciosa from the Mirador de Guinate the other day. I love ferry journeys, and so today I will sail to the island. According to the weather forecast, it should be a gloriously sunny day for it.

The swell is strong as the ferry sails out of Orzola. I haven’t got great sea legs. But fortunately, the  dramatic Batería del Rio escarpment distracts me from the swaying horizon.

Although the swell subsides on the other side of the escarpment, there’s still a chill wind blowing in. And the escarpment takes on a darker and impregnable aspect .

The sun, through the dispersing morning mist, plays around with the colours. The warm brown  escarpment has turned steely grey on the other side. And now, ahead in the mist, I can just about make out indigo mountains rising out of the sea.

Half an hour later, the ferry pulls into  Caleta del Sebo.  The volcanic mountains make a spectacular backdrop. An article somewhere had criticised visitors who simply descended on the beaches on either side of the port. Not wanting to be lumped in the same bucket, I head out of the village.

As I cut through the village, I conclude that building an entire village on a beach beats building sandcastles on a beach. There’s no tarmac. Front doors open out to sand and palm trees.

I’m now on the bicycle track heading out towards Parque Natural Archipíelago Chinijo. Apart from a ranger’s jeep going past me, there’s no one else. La Aguja Grande rises up on my right. From afar, it had looked like just another brown mountain. But as I get closer, it’s southern side begins to resemble a marble cake, the evidence of its once violent existence.

A man scoots past me on a quad bike. Initially, I assume he’s a resourceful tourist. But when I see it abandoned by a cacti farm, I surmise that it’s the choice of transport for locals. In such terrain, a scooter by any other name just won’t cut it.

I am now walking between two giants, La Aguja Grande and Montaña Mojon. Although I’m now about 2 kms inland, I can see tiny shells in the sand. I could be walking on an ancient seabed.

A couple walking at pace soon overtake me. Then a cycling tourist, braking his feet on the gritty track, rolls past me, as we all head downhill.  As we come over another brow, we get our first glimpse of beaches and Isla de Montana Clara.

According to Google, I’m still 1 km away from Playa de las Conchas. So I trek on. Cyclist and walking couple are now out of sight. But the fabulous red Montaña Bermeja ahead, keeps me company all the way.

A fluttering red flag marks the location of Playa de las Conchas. I run bare feet in the cool sand to the beach, taking in the majestic sight of Isla de Montana Clara. Montana Bermeja is right by the beach. If you could toboggan down that mountain, you’d land on the beach and some.

Needless to say, the sprint couple got here ages ago as evidenced by the fact that they’ve already managed to have a swim. Despite the red flag! Anyway, I take advantage of the temperate water by dipping my toes in it. Inconceivable in England, in January.

I decide I’ve got time for a circular walk back to Caleta del Sebo. I set off ahead of the couple. I’m on another bicycle track, admiring more beautifully chiselled mountains, when I get overtaken again. It looks like they found a shortcut by the base of Montana Bermeja.

Unsurprisingly, I soon lose sight of the couple once more. But that just means I have Playa del Ámbar to myself. Perhaps not as spectacular as Conchas, but still a beautiful beach.

Now on the home straight, I walk the length of Playa del Ámbar. There’s a solitary tent on the beach, with mother and child playing in the sand. There’s no sign of any transport. Now, that’s how to get away from everything.

The landscape becomes a little bleaker. I reckon I’m still over an hour away in this hot, even in January, sun. It looks like the weather forecast was spot on, for a change.

At a crossroad,  my little 4”x4” map on the ferry leaflet suggests that there’s a quicker coastal footpath back to port. So I divert to the beach. But I can’t find any marked footpath. Instead, I find the holiday cottages of Casas Pedro Barba. As manicured as it is, I am charmed by this oasis from out of nowhere.

Even though I’ve extended my walk, I’m glad of this unexpected find. And as I walked in to Pedro Barba, the same couple were walking out. Ah ha! I’ve almost caught up. Or they’ve slowed down.

Marching along the original track, I keep looking out for alternate routes. Great minds must think alike, as the couple are now cutting across country. Trust them to find all the shortcuts. I stick with the bicycle track until, from my vantage point, I spot a proper path below me leading into the village. Before anyone can say La Graciosa, I’m off the track and cutting through scrub too.

As I trek down the path between allotments at the back of Caleta del Sebo, I take one last look back at the stunning La Aguja Grande, my favourite volcano.

Hard to believe it, but it looks like I found the mother of all shortcuts. Both the couple and I enter the village at more or less the same time, albeit from different directions. I think this is deserving of a good long lunch and a large glass of wine. Both of which I am served at the nautical blue and white Restaurante Girasol Casa Margucha at the port.

I jump on the 15:00 ferry back in the warm sunshine. And this time, I manage to get a good view of the  lighthouse at the head of the escarpment.

I sail into Orzola, admiring the setting of this typical white Lanzarote village. The whiteness is so striking against its sandy and rocky surroundings.

The bus is another hour away. But I while the time away lapping up the views of the harbour on a sunny ledge. A perfect end to a day of wandering around an amazing island.