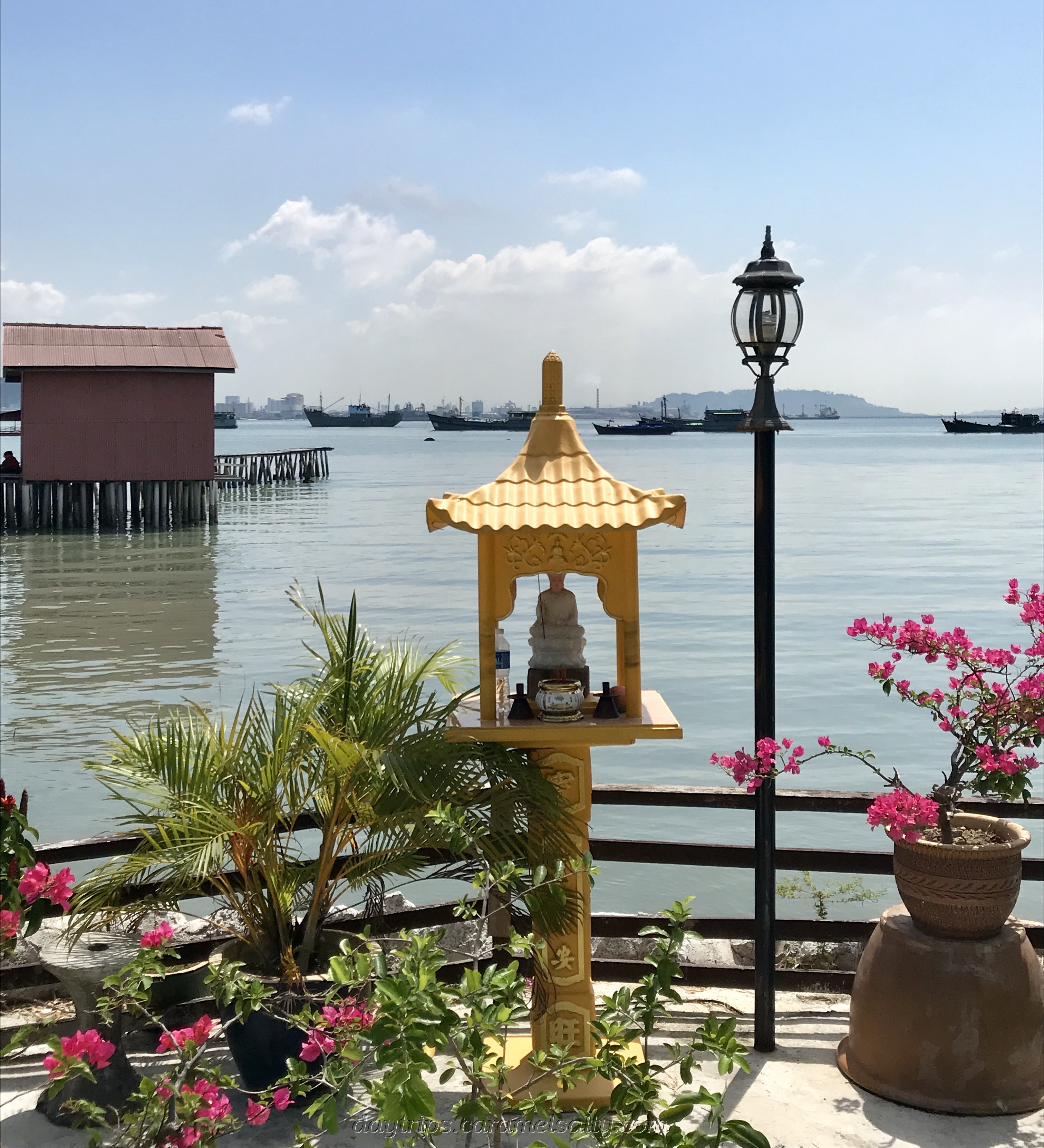 The earliest reference I can find of Penang suggests it was already a small trading post in the 15th century, having been visited by Admiral Cheng Ho, who calls it Ping Lang Seu, back in 1405. Nothing much is then written of Penang, until Sir Francis Light arrives in 1786.

If this had been 19th century Penang, then [1] Lebuh Pantai (Beach Street) and Lebuh Victoria (Victoria Street) would have been the sea shore. It’s a little hard for me to picture this today, given the busy main road and buildings lying between me and the sea.

According to old maps, walking down Lebuh Melayu from Lebuh Pantai would have meant me wading through squelching mud. However, today, I sit in [2] Spice Quay Café watching my roti canai being made on the spot while I chat to the pleasant Mr Balan, the owner.

After breakfast, I find myself wandering down the little lanes of a quiet Chinese village, trying to find a way to the sea front. I’m in the [3] Yeoh village and jetty, from where I get great views of the other clan jetties lining the waters edge. Due to its location away from the main road, tourists hardly visit this place.

My reason for dropping into Yeoh jetty is to visit the [4] Hean Boo Thean Kuan Yin Temple, a relatively new temple in Penang. It is dedicated to the South Sea Boddhisattva Kuan Yin. From its upper deck, there are sweeping views of the clan jetties, as well as Butterworth and the Penang bridge, the 2nd longest in Malaysia.

Back on the busy main road, I visit the [5] Clan Jetties that I saw earlier from Yeoh jetty. The clan jetties are home to Chinese families who have lived in these stilted wooden houses along a wooden jetty since the 19th century. Each jetty belongs to a specific clan, hence names like Duishan, Lee and Chew.

The very commercial Chew jetty has tourist shops lining the front of virtually every house. So I end up spending more time in the other clan jetties, to get a better sense of day to day life on a jetty. Many Chinese migrate to Penang in the 19th century to work in the free port that the British create.

Back to 1800 Penang, Gat Lebuh Chulia, and all the other Gats running parallel to it, would have been muddy tracks from Beach Street. After all, ghat means steps leading down to the water. Today it’s a tarmac road, where I catch sight my first Penang street art. [6] Children Playing and [7] Brother and Sister are amongst the imaginative murals that encourage visitors to take selfies.

Walking across Lebuh Victoria and then down Gat Lebuh China, I try and shut out the modern city to picture a lonely muddy path down to the sea. However the elegant, colonial white [8] Malayan Railway Building (1909) with its handsome clocktower distracts me. Had is still been the train station, it would’ve been the prettiest train station in the world without a train platform.

Which brings me nicely to the expansion of Georgetown in the late 19th century. Land is reclaimed to build an improved port. And so Pengkalan Weld, the Malayan Railway Building, and new harbour are built. Beach Street loses its waterfront status. The Gats become proper roads, but are not tarmacced until a few decades later.

Carrying around the coast road, to the back of the fort and then across the green to Love Lane, I come across more British legacies as follows:

The Padang is the first bit of land that is cleared with the arrival of Sir Francis Light in 1786 after having acquired Penang from the Sultan of Kedah. The island is named the Prince of Wales Island. Apparently Francis Light fired silver coins into the forest to entice the locals to clear the land. A rather novel way of remunerating the workforce.

After the Padang, [13] Fort Cornwallis (1786) is the next thing to be built. Besides pirates and England’s European enemies, it is also meant to protect Penang from Kedah, given that Light has reneged on his agreement with the Sultan.

I walk down [14] Love Lane, a quiet, quaint street in Penang. Many stories surround the origin of its name. However I know for sure that this is where the Eurasians lived, given its location just behind the church. Today it still attracts Europeans, but primarily because of its converted guesthouses.

Love Lane leads onto [15] Stewart Lane. I adore pretty doors and verandahs, and this street does not disappoint.

But the highlight of the street is what I think is the best mural in Georgetown. It’s [16] Volchkova’s Fisherman. I love the space the art is in, and the serenity of his face despite being hard at work.

A museum is the perfect place to escape the oppressive late afternoon heat. The [17] Pinang Peranakan Mansion has entertaining tours of this elegant wealthy Chinese house and its huge collection of Peranakan traditions and crafts. The Straits settlers, as they were also known as, are Chinese traders who started arriving in Penang over 2000 years ago and married local women.

As I walk back down Lebuh Chulia, I spot the [18] East Indies House, now a hotel. However the staff kindly allow me to enjoy the lovingly restored building. The cooling hues of blues, greens and cream, the eclectic mix of old and new, and blend of Chinese and local styles, reflect the pot pourri of cultures here.

And thus endeth my history lesson for the day. But I’m not quite done with the eating yet. I wander back to CF Food Court, back by the clan jetties, to have the famous Penang Char Koay Teow, sold every where in Georgetown. The secret of a good koay teow is to achieve that smokey, caramelised taste. And it does. And thus endeth my gourmet experience for today.

Opening Times and Such

One thought on “Georgetown – A Trip Back in Time”