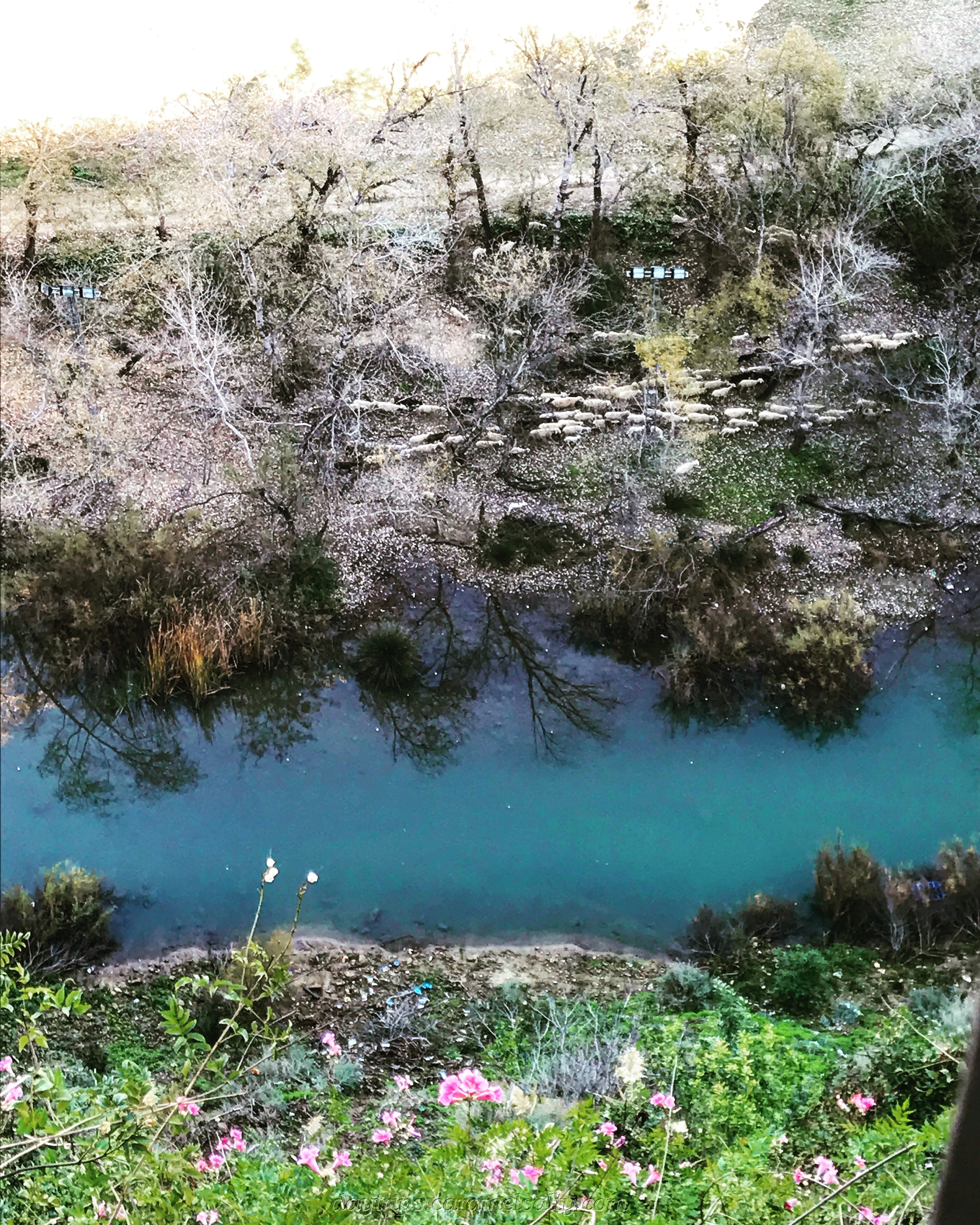 Little did I know when I decided to visit Arcos de la Frontera, that I would be marching up and down the hill in a beautiful Spanish “pueblo”. I must admit that at some point during the day I did feel a little like the Grand Old Duke of York and his men.

It’s 09:30. I catch the first bus to Arcos de la Fontera (3 Euros each way) outside El Puerto’s train station. As we rise over the brow leaving El Puerto behind, I am whisked past sherry sponsored roundabouts, road side cacti and a golf course with palm trees.

Signs for Williams & Humbert, Fundador, Croft and the sight of Tio Pepe’s huge (the 3rd largest in the world) weathervane tells me that we are in Jerez. The bus continues on to Jedula, which is when the scenery becomes lush and green and those magnificent hills in the distance become more prominent. As the bus drives into Arcos, I spot the castle and church aloft on a high rock. Just as it must have looked to ancient marauders, the climb seems a little daunting. So I take it slow and easy up the hill via Calle Corredera to the Municipal Tourist Office. The tourist map is excellent. There are also detailed information plaques everywhere. So no point me regurgitating all of this. I’ll just talk about my favourites, whilst referring to the numbered references on the tourist guide.

Not on the tourist map, but as I continue to climb up the hill, I spot the startling Santa Semana sculpture on my right.

#4Old Jerez Gate – is a yellow arch that forms a dramatic entrance into the city. Much of it was destroyed in 1852 by the powers to be, as it was obstructing a straight road. Looks like responsible vandalism existed back in those days too!

#6Palace Conde de Aguila – nice facade. But what I really notice is how it leans in towards the narrow cobbled streets.

#7Calle Nueva – is a reminder of a significant event that literally rocked the Iberian peninsula. This street used to be the moat for the castle above until the 1755 Lisbon earthquake destroyed the moat wall.

#8Plaza del Cabildo – is my favourite square in this town, by a mile. In 1812, the French, whose emperor was Napoleon at that time, were finally defeated in the Peninsular Wars. The French army dismantled the structures before departing, leaving the open square you see today.

Next I soak up some sun and amazing vistas from the Plaza del Cabildo viewpoint. As I exit the square, I spot Meson Corregidor, a restaurant with a fabulous terrace for drinks with views.

#12Convent of the Incarnation – I drop by to admire the Gothic buttresses over the street.

I then wander down Calle Escribanos, another pretty white street leading east towards #23Iglesia San Pedro. This charming town with its vistas and medieval buildings is beginning to cast it’s spell on me.

#13 Convent of the Mercederias Nuns – after having failed to do so in Belem, Lisbon, I finally purchase local sweets made by nuns who shall remain invisible. I transact through an obscure revolving door and receive my box of nunmade pestinos (deep fried flour with spices, coated in honey).

#19 Mayorazgo Palace (Tues – Fri, shuts at 13;30, reopens at 16:00) – don’t let the raucous laughter from the ground floor bar fool you. It is a palace. There is a wonderful exhibition of paintings of local scenes when I visit. I have a coffee and a single bollo (local delicacy) in the bar for (2 Euros). Which is fortunate, as they only sell them in 6 packs in the shops.

San Abadas Viewpoint – those magnificent mountains that I had spotted during my bus journey, come alive at this viewpoint. An incredible unhindered view.

#29Iglesia de San Augustín (daily, shuts 13:30, reopens 15:30) – has a majestic ungilded wood altar piece. As it’s just before X’mas, the altar was partially covered by a Nativity scene. I guess the birthday boy gets priority at this time of the year.

#31Matrera Gate – only part of  the defensive eastern gate is left. Once past these gates the town starts spreading out, the cobbled streets soon become tarmaced over and all too quickly it becomes a tidy Spanish town. I think marching within the old city walls is more interesting.

The March Back Up Again

San Augustin View Point – is worth every minute of the walk along Calle Calejas. With a bird’s eye view of the Guadalete River winding beneath me, farms dotting the landscape, I breathe in the fresh air and listen to the bleating of sheep down below.

#20Calle Cuna didn’t do it for me. But as a substitute, may I suggest Calle Juan de Cuenca, with the #23Iglesia de San Pedro looming into view as you climb the street. I’m famished now. A simple handwritten sign cellotaped to the wall directs me to Bar San Marcos. A wonderful, friendly, cheap, family run restaurant. I have the bacalao de minuto and it’s a hit.

The March Back Down Again

It’s now time to catch the last bus home at 17:40. I wander back down on Calle Paseo de Boliches, at the edge of the town, for my final views of the valley below. And have a sherry for the road at the sunny Cafe Lia, just by the bus station. And to top my day,  as the bus comes over the hill towards El Puerto, the twinkling lights of the wind turbines in the distance reminds me of X’mas trees.